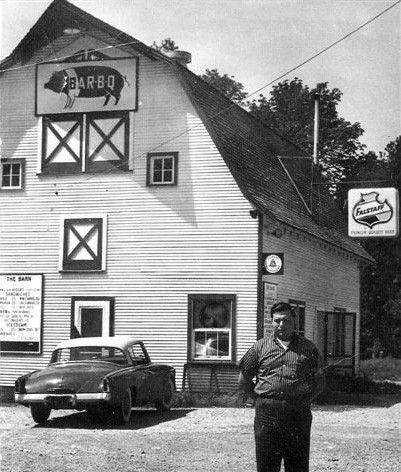 Would-be burglars failed to gain entrance into the main building after breaking into the storeroom at the Barn Drive-In on Sunday night. Apparently, the culprits gained little for their efforts as nothing was found missing, police reported.

Investigating officers said the break-in was discovered by Roy Shuck, owner of the business, when he opened the establishment at 10:30 Monday morning. It had been closed at 12 Sunday night.

Officers found that the rear west door to the storeroom had been kicked in and broken in several pieces. A second door leading to the main building was not entered. However, the door on a deep freeze was left open. Nothing else was disturbed, police said.

The Barn was located at 607 S. Kingshighway, between what is now Coad Chevrolet and Auffenberg Kia.

Name brand appliances sold below wholesale dealer cost to EVERYONE. Dealers also welcome. Come out to the barn and saddle up a bargain at a "price you won't believe."

607 S. Kingshighway, South of the Plaza, Plenty of Free Parking

An advertisement in the Dec. 6, 1968 edition listed a liquidation auction sale at The Barn Auction, 607 S. Kingshighway, across from Rueseler Chevrolet.

In city council action reported in the Oct. 17, 1969 Southeast Missourian: Upon a report of the police department, refused the application of Thomas H. Armbruster for a liquor by the drink license at the Barn, South Kingshighway.

G.D. Fronabarger wrote this item in his business column in the Nov. 15, 1969 Southeast Missourian:

There will be a new retail shoe outlet in the city. Dee Dee's Shoe Outlet, specializing in women's footwear, will occupy the site of The Barn on Kingshighway south. The outlet is now located at Dutchtown and is owned and operated by Kenneth Corbin. The store is to be opened soon.