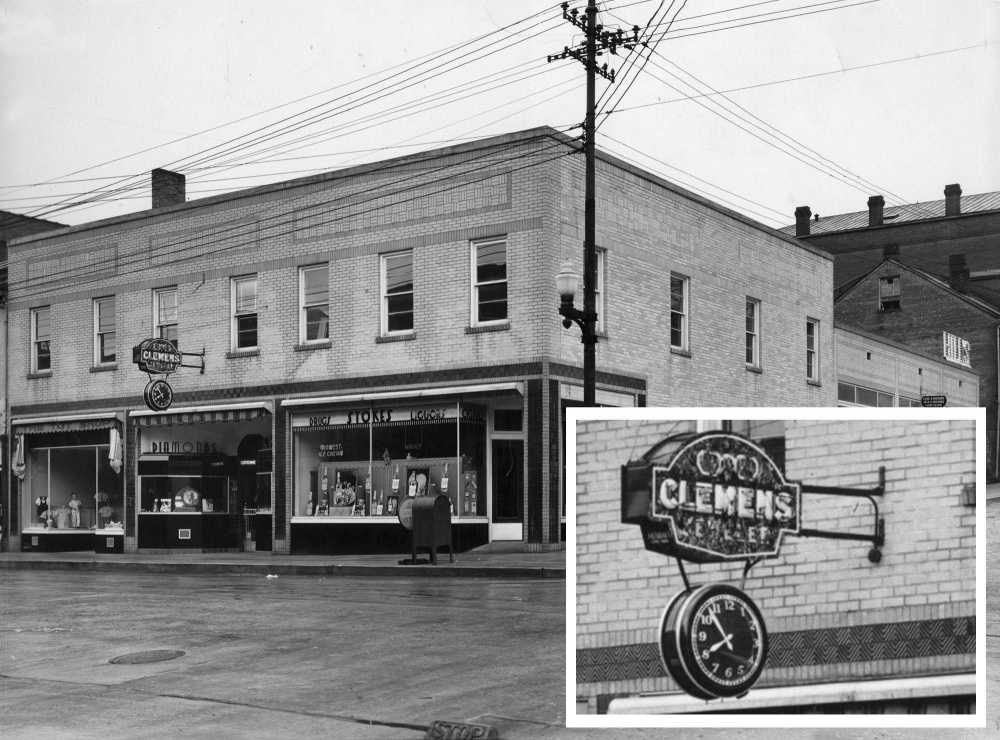 This photograph, circa 1939, of Clemens Jewelry at Main Street and Broadway shows that downtown Cape Girardeau had a public timepiece after the clock on the Sturdivant Bank was removed.

The first downtown clock was on the Sturdivant Bank building at Main and Themis.

The old Studivant Bank clock was moved to the H-H Building in 1939.

The V.J. Clemens jewelry store was moved Thursday night from 43 North Main street to the new Clemens Building and is now located at 137 North Main street. The store opened for business this morning. It had been at the old location 16 years, Mr. Clemens said.

The new place is entirely modern as to fixtures, lighting and heating. It is 70 feet long, which is 22 feet longer than the former store. An upstairs compartment is at hand, too, to be used for storage. Mr. Clemens is assisted in operation of the business by John Juniker and Emmett Dohogne.

The Clemens jewelry store moved from the St. Charles Hotel building into a remodeled building on the corner of Broadway and Main. Other tenants in the building included the Tot Shop, a children's apparel store, at left; the corner room was occupied by Stokes Drug Store, and the law office of Judge O.A. Knehans was behind it fronting Broadway. Notice the street-level stop sign below.

The corner, once a drab and unsightly location, has been completely transformed. It appears as if a completely new building has been erected. The project, from the standpoint of remodeling, is an outstanding one of recent years in the city.

V.J. Clemens has announced the sale of his jewelry business to Lemro Hale of Bonne Terre and said that the transaction will be completed Thursday when Mr. Hale moves into the Main street location at which Mr. Clemens had his jewelry store. Mr. Clemens will continue to occupy part of the store temporarily for his optometry business.

After 50 years Hale's Jewelry Store is retiring and closing its doors.