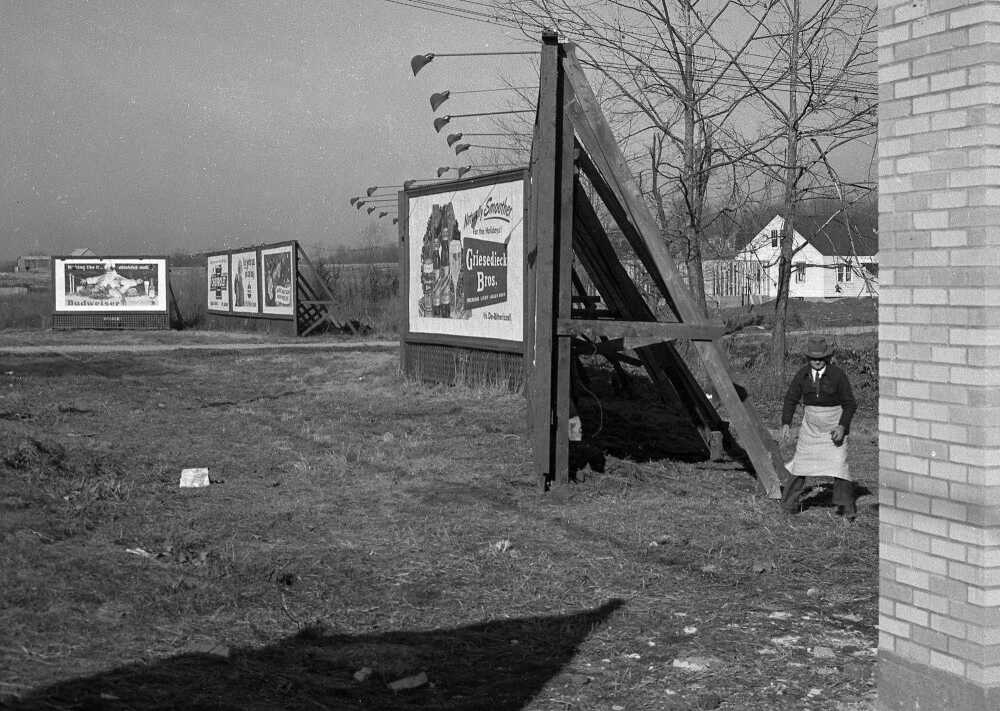 Question of Billboards Comes Up Again

Should billboards be permitted on major streets, and if they are what regulations should be laid down to govern not only their original erection but also their continued presence?

These questions and others similar in character have been raised since property owners in the 1700 block on Broadway have called attention to billboards there which hide a number of houses from view on Broadway and obscure one side of a new store building now under construction.

These particular signboards were erected under present city regulations and are assumed to conform to them. Blown down by the May 21 tornado, they were rebuilt the next day and a few weeks ago two were moved to locations nearer the street.

At present billboards come under two city ordinances, one covering them specifically and the other the general building code.

The original billboard ordinance was passed April 4, 1923, and subsequently amended in part not long afterward. Several years later the zoning ordinance setting forth parts of the city for residential, commercial, light industrial and industrial construction, was adopted.

The first ordinance set out that before a billboard could be erected a written statement or plans and specifications must be filed with the city clerk. Size of the boards was fixed at 12 feet, and not more than 14 feet above adjacent street level. Inspection for safety factors and maintenance was provided and square feet of area limited to 2500. Construction which prevented full view of pedestrians and motorists was prohibited. Removal of waste paper and debris was required.

Subsequently one section of the ordinance was repealed to allow filing of a remonstrance against the signboards. This required publication of a legal notice of location if the board was to be placed in a section where half the buildings were residences. Property owners were allowed five days to file a protest and if a majority in a given area signed the city could not authorize a permit.

Later came the zoning ordinance. Billboards are considered a business. Under it they could be erected in an area zoned for light industry or industry.

City Engineer John R. Walther said a remonstrance would apply under the old ordinance if an attempt were made to erect a billboard in a residential area.

He noted further that if a permit was filed in a section zoned for commercial use he would turn the matter over to the Board of Adjustment for a hearing and decision.

But, he said, the question of erecting a billboard in a section zoned for light industry or industry is something else.

Under the city licensing ordinance billboard owners are classified as bill posters and pay a license of $30 semi-annually, regardless of the number of billboards they may own.