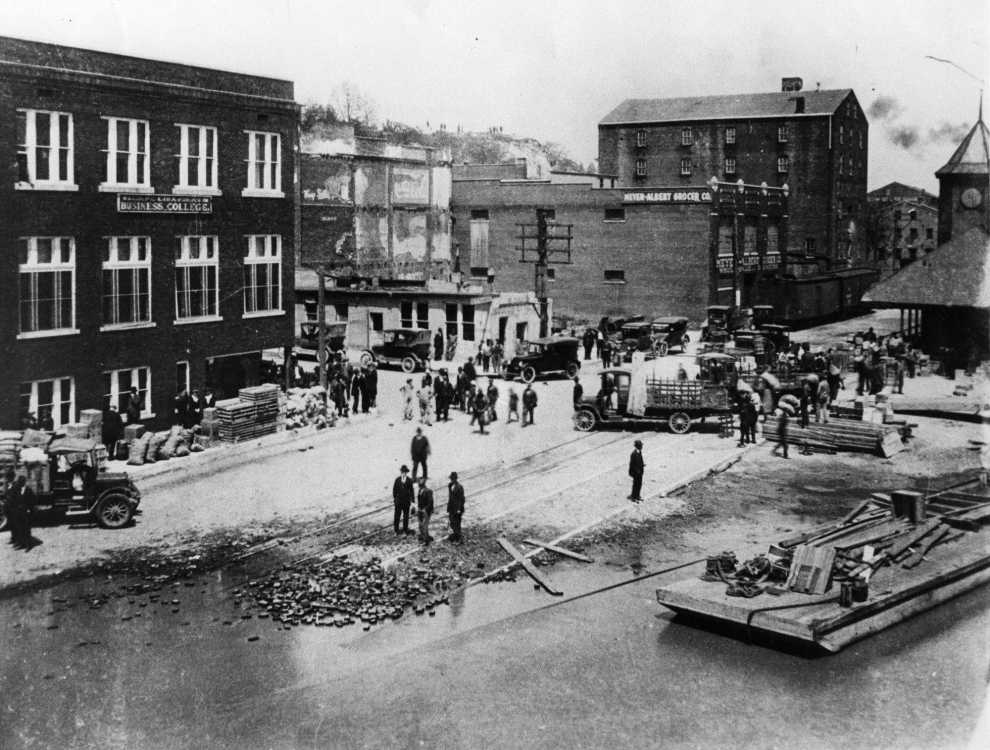 Our librarian, Sharon Sanders, discusses this old photograph from the Southeast Missourian archive:

You're looking north from a boat on the river toward the intersection of Broadway and Water Street. This shows reconstruction of the north and the south corners after the 1916 fire, which burned three large buildings and several smaller ones.

The brick building at left (with the business college sign) is the Buckner-Ragsdale building. The Cape Girardeau Business College was upstairs.

I'm not sure what the single-story, stuccoed building was used for in this picture; in later years it was a restaurant run by "Daddy" Kain. That's the site of the Riverview Hotel, now a parking lot. West of that, you can make out the wall of the Palace Bar. North of the corner is Meyer-Albert Grocer Co. The tall brick building north of that is the Union Mill building. The frame building on the east side of the street is the Frisco depot.

I would guess the picture was made between 1916 (the year of the fire) and 1921, when the brick train station was completed on South Main. However, it could be as late as 1923, when the frame depot was demolished.

City of Cape Girardeau will regain possession of site of old Frisco Railroad passenger depot on Water Street near Broadway; depot, long a landmark in Cape Girardeau, was razed recently by Frisco employees in accordance with agreement with city that building would be torn down when new depot was built; according to terms of franchise, property reverts back to Cape Girardeau.