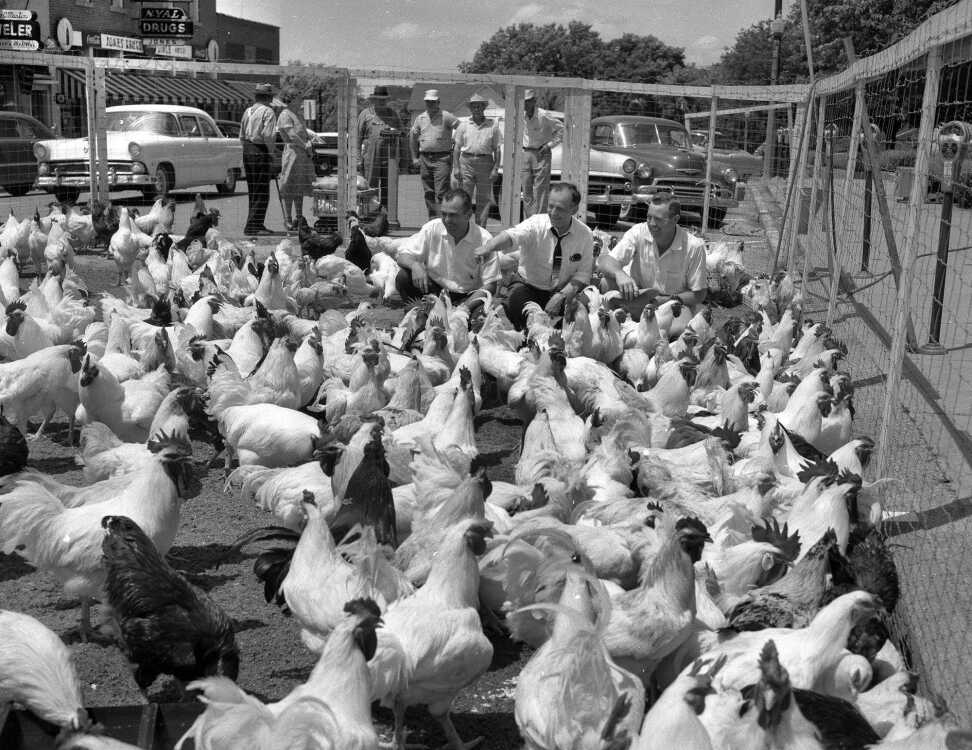 The second annual Rooster Day, sponsored at Jackson by the retail merchants of the community and the County Poultry Improvement Association, netted about 500 old roosters removed from flocks over the county in the flock improvement plan. This shows most of the aged birds in a big pen on the street in the courthouse square. Looking over the flock in the background, from the left, are Elmo Martin, Jackson businessman; E.R. Bennett, egg inspector from state department of agriculture, Jefferson City; and County Agent A.D. Arnhart. (G.D. Fronabarger photo)

The second annual Rooster Day held Saturday in Jackson was pronounced a success. Sellers received 5 cents per pound above the retail price. More roosters were brought in this year than last. Besides high prices for the birds, a number of cash awards were also given. Five dollars were given to the following in these events: Rooster brought the longest distance, Wanda Springer, a total of 24 miles, her home being on Route 1, Advance; Wanda Springer also was given the prize for having the smallest bird; Henry Fluegge, 88 years of age, was the oldest person selling a rooster; Eli Seabaugh was owner of the rooster with the longest spurs, his five year old bird having spurs measuring 2 1/2 inches; James Welker, 13 months of age, took the award for the youngest person selling a rooster and Ed Hemmann sold one weighing 11 pounds and 4 ounces to win $5 for largest rooster.