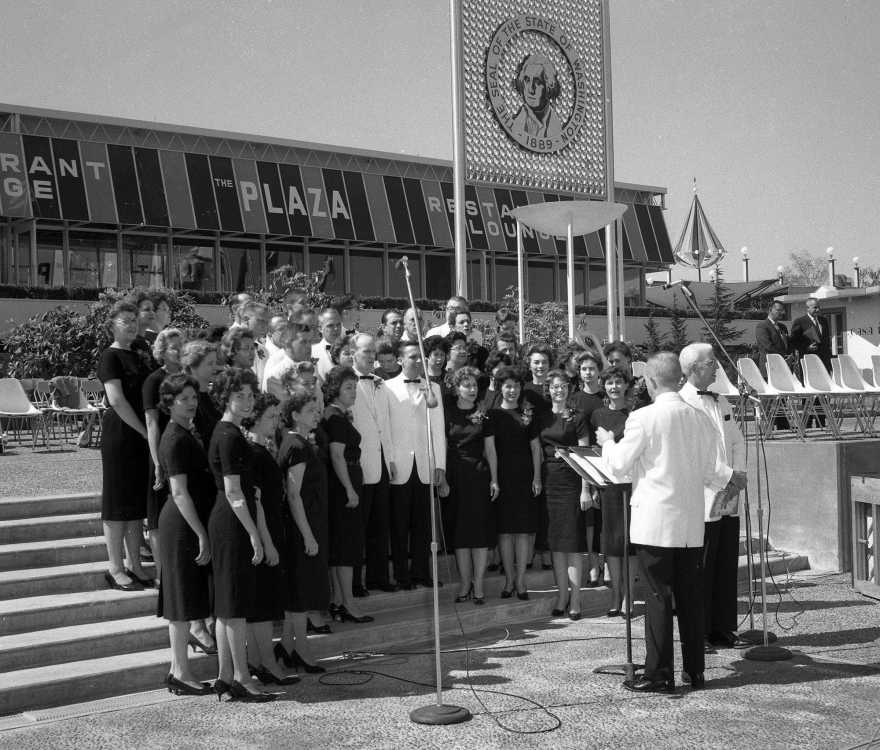 The Cape Choraliers are ready to perform at the 1962 World's Fair in Seattle. (G.D. Fronabarger photo)

The way it was - Former Cape Choraliers reunite after 50 years

The 48 singers who called themselves the Cape Choraliers were thrilled when they learned they had been chosen to represent Missouri at the 1962 Seattle World's Fair, but the news left them less than a month to raise the $13,000 needed to make the trip. On the night before the plane was to leave, Choraliers and spouses and friends were still going door to door selling donated loaves of bread to make up the last few hundred dollars.

That weeklong trip to Seattle, the high point of the Choraliers' 21-year run as a community chorus in the 1950s and 1960s, was foremost in the conversations Saturday afternoon when the remaining local members gathered at the Cape Girardeau Public Library for a 50-year reunion.

Newspaper stories about the Choraliers and concert programs were laid out on tables at the reunion, and walls were covered in black and white pictures of these same people singing 40 or so years ago.

The name Palsgrove was synonymous with the Choraliers during the group's lifetime. Jack Palsgrove, an insurance agent, was the director, and his wife, Susie, accompanied the group on piano. She taught music at Southeast Missouri State University. The Choraliers disbanded when the Palsgroves stepped down from their leadership roles in 1972.

Theirs were among the 23 names of deceased Choraliers written on a whiteboard at the front of the room at the reunion.

Jones said her parents "really did live the music and love the music."

'All walks of life'

The Choraliers sang their first concert in May 1952 under the name Cape Community Chorus. They included housewives, architects, teachers and beauticians and count among their number Stephen N. Limbaugh Sr., now a U.S. district judge, and newspaper publisher Gary Rust.

"They came from all walks of life," said John Mehrle, a longtime member who also sang in the group's barbershop quartet.

Choraliers also came from many different towns and cities surrounding Cape Girardeau. They rehearsed once a week and had a party once a month.

They sang sprightly Fred Waring arrangements and performed at the former Central High School auditorium and at Academic Auditorium. They gave a spring concert and usually other concerts at holidays.

There were groups within the group. The Cape Choraliers spawned a women's trio called the Mama-nettes, which consisted of Virginia Boren, Pat Blackwell and Nona Smith in the beginning, with first Susie Palsgrove and then the late Virginia Hill replacing Smith later on. A women's quartet called the Daydreamers included Mary Frances Kinder, Lou Brune, Mary Harrison and the late Millie Limbaugh.

The Choraliers did wonderful things on a budget. Each paid 50 cents a month in membership dues to cover the cost of sheet music. The women wore the same concert dress many years in a row, but they altered the dress in ways to make it look different each time.

Blackwell remembered how the group lost one of its rehearsal halls, a room at the First Baptist Church. A maintenance man saw the singers clapping their hands and clomping their feet to the song "Skip to my Lou," she said.

"The janitor told the church board we were dancing."

The Choraliers have long memories. Jo Ann Bock, a retired Central High School teacher who helped organize the event, invited Dr. Dan Cotner to the reunion because he helped the Choraliers raise the money they needed to get to Seattle. John Hill, the spouse of deceased member Virginia Hill, was thanked for antics that kept all the fearful fliers laughing all the way to Seattle and back.

The group recorded one album that was available for sale. Wagoner, a retired industrial technology professor, also taped most of the Choraliers' concerts himself.

He is among a number of former Choraliers who are still singing, most of them in church choirs.

Many of the Choraliers had never flown before the June day they boarded the four-engine Constellation airliner that carried them to the World's Fair. Rachel Palis recalls that the passengers on the plane would run from one side to another to ooh and ah at the sights many were seeing for the first time. "The pilot got perturbed," she said.

The Cape Pilots Association volunteered private planes to ferry the singers to and from the U.S. Air Force base then in Malden, Mo., because the airliner was too big to land at the Cape Girardeau airport.

The airliner also transported 26 others from the area bound for the World's Fair, including Southeast Missourian photographer G.D. Fronabarger, there to record an important community event.

On Nov. 17, 1979, the Cape Choraliers reunited for one last concert, a benefit for the Old St. Vincent's Church renovation. They never sang together again.

"Maybe it had run its course," Bock said.