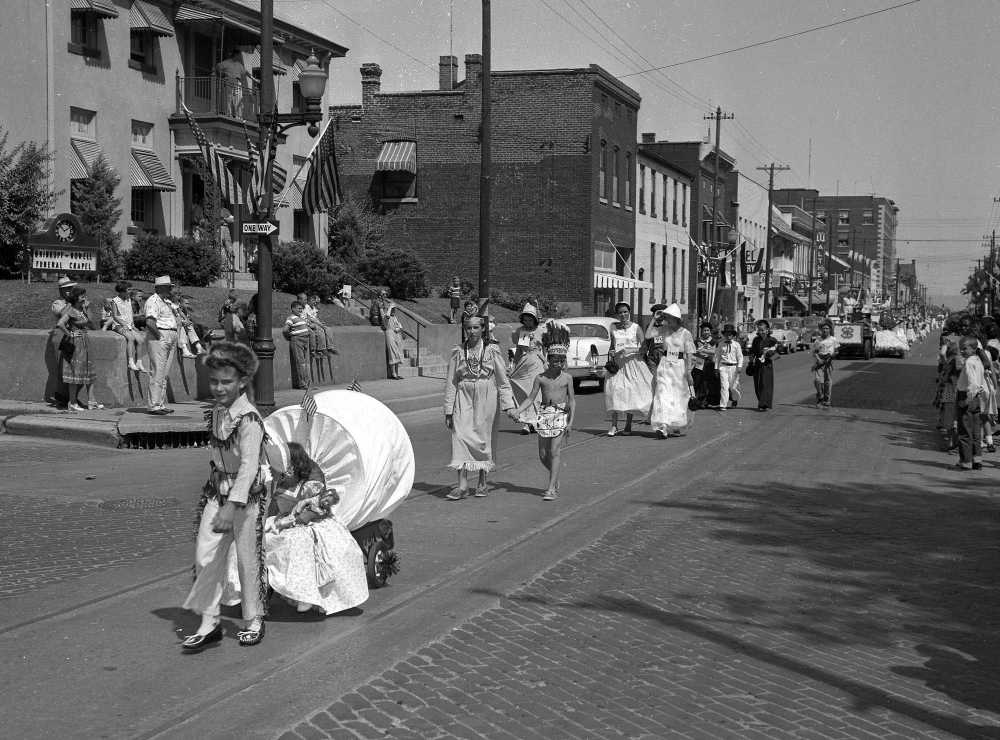 Here is one of the several groups of marching children who participated in the Youth Day parade Thursday afternoon. A pioneer pulling a covered wagon is in the foreground, while Indians and youngsters in dress of early years follow. (G.D. Fronabarger photo)

A time capsule containing memorabilia of 1956 will be buried, long time residents and former residents will be honored and Brothers of the Brush will have their final fling in ceremonies Saturday heralding the end of Cape Girardeau's Sesquicentennial Celebration.

Scores of separate items of Cape Girardeau today will be placed in the time capsule in ceremonies at the shelter on the west edge of Capaha Park. Afterward the capsule, a sealed, waterproof container, will be buried in Courthouse Park, not to be opened until the city's bicentennnial in 2006.

Each has been asked to bring some item related the group or organization he or she represents. Among material to be placed in the capsule will be a copy of The Southeast Missourian sesquicentennial edition and of each paper this week, savings books from each bank showing a $10 deposit in each as the start of the fund for the bicentennial, municipal papers, copies of sesquicentennial program and other effects, school personnel, college personnel, hotel menus, agriculture material, city director and list of business establishments, 1956 calendar, stamps and celebration cancellation mark.

Six girls and six boys will be named by Boy and Girl Scouts to form the nucleus of the committee for the bicentennial of 2006.

Those who participated in the 1906 centennial celebration will be recognized in the pioneer ceremonies on the same program. Awards will also be made for the oldest pioneer, the longest resident and the former resident who has returned to the celebration from the greatest distance.

The Brothers of the Brush contest has been switched from forenoon to afternoon to enable more men with beards to participate. It will be held at 4 o'clock on the reviewing stand on the post office lawn.

Electric razors will be awarded the winners in each category with a woman's electric shaver to go to the winner of the most pitiful beard.

Three finalists will be selected in each classification for final judging at 7:15 o'clock Saturday night at Houck Stadium. At 8 o'clock there will be a shaving contest immediately preceding the final performance of the pageant.

Attendance at the pageant Thursday night was the largest of the week with an estimated 4000 people in the stands. This brought the estimate of those who have seen the show to 11,250 in four performances. Other large crowds are expected to attend tonight and Saturday night.

Applause arose throughout the stadium Thursday night as the Black Knights, junior drum and bugle corps of Belleville, Ill., staged the 15-minute drill with which it will seek its third national championship at the annual meeting of the American Veterans of World War II next week at Milwaukee, Wis.

The black clad Knights, performing in precision formations that were reminiscent of the Golden Troopers of other years, played outstanding music both in marching and in their concert formation. The corps uses only three snare drums and two bass drums. Remainder of the 65 playing members are buglers.