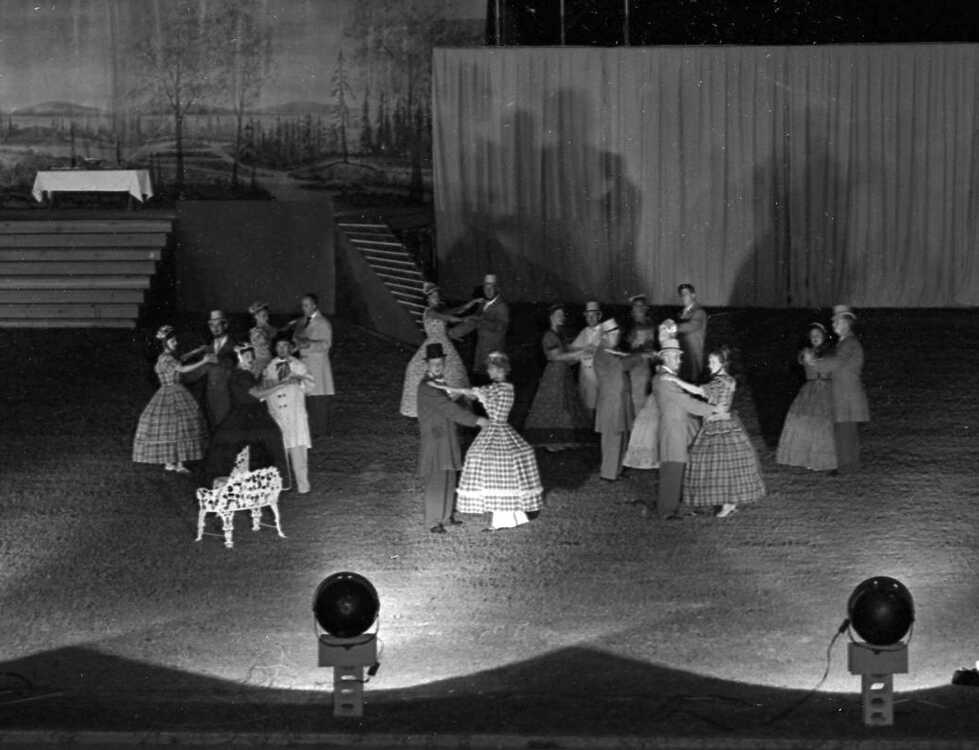 One of the colorful scenes from the sesquicentennial pageant is the military ball staged by the Home Guards of the "Marble City," as Cape was designated in those early days. This ball was being held and abruptly broke up when the news came that South Carolina was seceded from the Union, the men, of course, rushing away to bear arms. This photo was made Friday night during the dress rehearsal. First showing of the pageant will be in the Stadium Monday night. (G.D. Fronabarger photo)

"Legend of Cape" Will Need Cast of 500 Local Performers

Casting of the 500 parts in "The Legend of Cape Girardeau," the mammoth pageant-spectacle that will highlight the city's Sesquicentennial Celebration Aug. 19-25 and will use the full length of the Houck Stadium football field for its stage, was completed in just a few minutes' time Wednesday night.

Approximately 100 representatives of civic, church, veterans and other organizations filled the dining room of the Marquette Hotel to volunteer their personnel for parts in the huge show, which will be repeated nightly during the birthday observance.

Mrs. Rita Haagen, professional director for the John B. Rogers Producing Co., who will direct and stage the production, went through the pageant scene by scene, then called for the various groups to volunteer to take individual scenes.

She explained that none of the participants will have any lines to learn. "Everything is done in script pantomime," she explained, by a narrator in the press box as the actors go through their parts.

Professional writers of the Rogers organization took the history of the city and from it wrote the script which tells of the first inhabitants of the region and then chronologically unfolds the panorama of Cape Girardeau's development.

Mrs. Haagen said the stage must be 300 feet long because covered wagons, horses, livestock and all of the properties essential to such a tremendous production could not be accommodated on one any smaller.

The producing company furnishes everything for the pageant, Mrs. Haagen explained. This covers all of the colorful costumes, the makeup and the properties of all descriptions necessary to stage the show.

Prologue on opening night will begin with crowning of the queen. Thereafter, the queen will be introduced at the start of the pageant.

The production moves from the prologue to the Mound Builders, the first known settlers in this section. It moves then to the Indians who followed them and to their encounter with the first white men, DeSoto and his soldiers. The arrival of the first missionaries and the planting of the crosses near the city is told.

Establishment of the trading post by Ensign Sieur Girardot at Cape Rock shows the first beginnings of the city. Next comes the arrival of Don Louis Lorimier and Bartholomew Cousin to found Cape Girardeau.

Mrs. Haagen said the story as it unfolds emphasizes the great impact the Mississippi River had on Cape Girardeau's development. Wagon trains on their way westward, building of log cabins and the start of farming, the first churches and schools, the death of Lorimier are all outlined in this phase of the pageant.

She related that it goes on to tell the part the town played in the Civil War, of steamboat traffic and showboats, the coming of the railroad, the early days of this century, World War I, the Roaring Twenties, the Depression Thirties and World War II.

The director urged organization representatives to tell their groups of the pageant's scope. She said they did not have to stay for the full show each night, but could come shortly before they went on and then leave after their part. It will take little time for any of the participants, only one hour of rehearsal a week for the three remaining weeks before the show, she added.