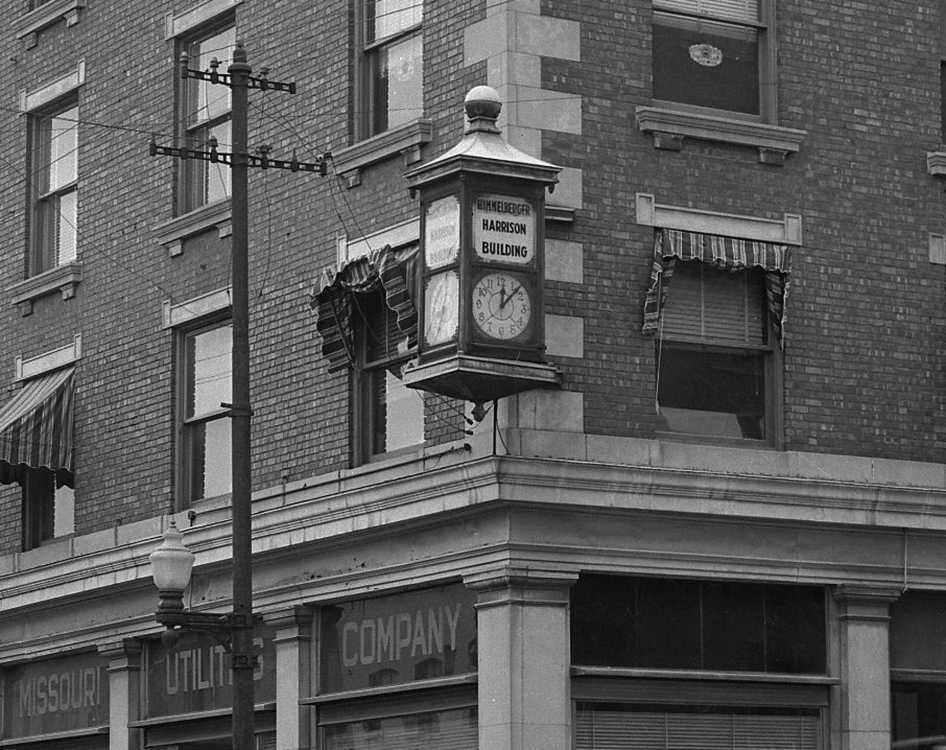 The former downtown clock is shown on the Himmelberger-Harrison building, Broadway and Fountain street, in this undated photo by G.D. Fronabarger.

Old Sturdivant Bank Clock is purchased by H. I. Himmelberger

H. I. Himmelberger, 603 North Henderson Avenue, has purchased the historic outdoor clock from the closed Sturdivant Bank and will preserve it. The clock, an early-day electric time piece, was bought for $35, according to an order filed in Circuit Court at Jackson. It hung for years over the sidewalk at the corner of the Sturdivant Bank Building, at the northwest corner of Main and Themis street intersection.

Old Bank Clock to Again Give Service to Girardeau

The old Sturdivant Bank clock, which for more than 20 years ticked away outside the Sturdivant Bank Building on Main Street, and bought recently by H. I. Himmelberger, is to be put in good condition and mounted at the southeast corner of the H-H Building. The big time-piece is about 23 years old.

The clock was erected by the Sturdivant Bank, now closed, as a memorial to Urhain J. Lonheinne, men associated with business activity here for several decades said today. Mr. Lonheinne was a prosperous farmer in Alexander County across the Mississippi River in Illinois, and because the bank officials often befriended him in a business and personal way, he willed property to the bank that amounted to $4001. It was said the bank purchased and erected the clock in memory of Mr. Lonheinne. At the time, William H. Stubblefield was president of the institution.

Records in Common Pleas Court, to which attention was called today by Judge L. L. Bowman, show Mr. Lonheinne's will was drawn Nov. 13, 1914, and was filed in Common Pleas Court for probate Jan. 6, 1916, shortly after his death. The will shows that after substantial bequests were made to some relatives and friends, the remainder of the estate was left to the bank. The administration papers show that 104 acres of land in Southern Illinois and other property he bequeathed to the Sturdivant brought $4001. The administration was closed in February, 1921.

The clock chimed on each quarter hour, and was quite an "institution" on Main Street until it was taken down a few years ago.

The master clock had been disposed of earlier by the bank after it closed. The other day Mr. Himmelberger purchased the works and bought the clock case from the bank, and after thorough repairs are made so the electrical unit will run well, it will be mounted on the H-H Building.

The clock was located on the Sturdivant Bank building in this previous blog.