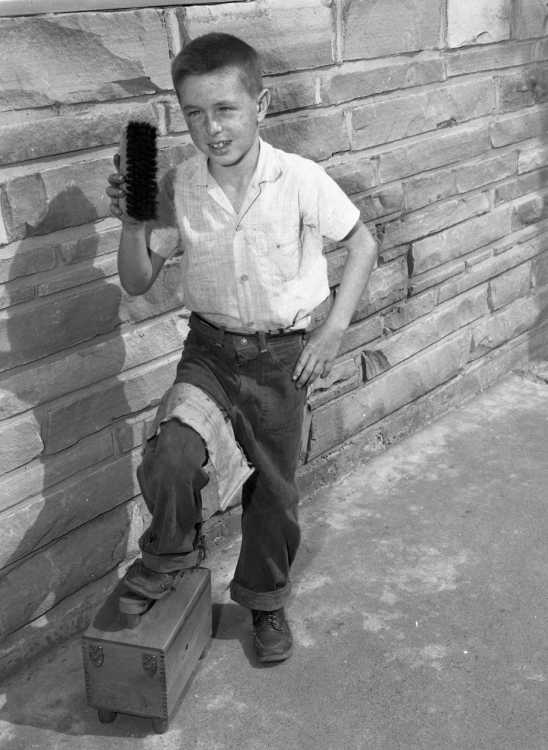 Brush in hand, rag ready, this shoe shine boy is ready to give a speedy shine. Dennis Dorris, 9, is one of many boys who have revived the old art of the street shoe shine boy in downtown Cape Girardeau. (G.D. Fronabarger photo)

This is an oft-repeated question these days directed at many male shoppers and patrons of downtown stores and other establishments by enterprising shoe shine boys in Cape Girardeau.

The boys, about five of them from 9 to 13 years old, have taken up the revitalized, once popular trade within the past few years since the number of shine boys in barber shops have declined. The reasons are varied.

One barber said his shop didn't have any shine boy because he was unable to find anybody reliable enough to stay on the job. Older boys who make the best shoe shine boys can get better and higher paying jobs elsewhere and younger fellows are not dependable when they have time to work, during non-school months.

But several young boys have discovered many men still appreciate a shoe shine if the price is low, the work speedy and they don't have to make a special trip to a barber shop. With this realization, the enterprising youths have re-kindled a practice once a common sight on American streets--the shoe shine boy.

These boys admittedly cannot shine shoes as well as the professionals still working in a few of the city's barber shops (one barber said the roaming shoe sine boys are "poor" shiners compared to experience boys). But their prices range from only 10 to 20 cents and they can complete their job within ten minutes, a good price in time and money for the hurried man. For these two features, many men feel the lack of professionalism is no drawback.

One such boy, a freckled-faced lad of 9 years old, is Dennis Dorris of 1105 Giboney, who is making a generous income, for a boy, of from $5 to $10 a week which he is using to boy new school clothes for Fall.

Because he is a member of a large family--four brothers and two sisters-- Dennis is unable to get new clothes every year even though he is active and wars them out fast. A crumbled piece of paper kept in his pants pocket shows a careful record of his weekly $2.50 payment to a downtown store for several shirts, a pair of blue jeans and other clothes.

Not all the boys are interested in necessities. Phillip "Butch" Wilkinson, 9, of 1005 Jefferson, is earning his money to buy a "go-cart," a small engine-driven racing cart.

Since their income depends on being where people are congregated most of the day, the youths must earn enough to pay for their lunches downtown and any soft drinks or snacks the need. Both Butch and Dennis also used their earnings to pay their way into a theater or swimming pool, a luxury they allow themselves once or twice a week.

Going person to person, and business establishment to establishment, the youths seek out men, and some women, who have dusty shoes and the desire to pay to have them cleaned. Most of the shoe shine boys earn between 50 cents to $1 per day during the week, but their income jumps sharply on weekends to sometimes as high as $6 on a busy Saturday.

"I guess people want their shoes to look nice for church or to go visiting Saturday night," Butch explained. "If it wasn't for Friday and Saturday, I guess the job wouldn't be so good."

Inflation enters into the shoe shine business as it does in the regular world of finance. Dennis has hiked his price for a shine from 10 to 20 cents in his seven months in the trade.

Because he invested part of his profits in business expansion--he recently purchased a new shoe shine box--Dennis feels justified in charging more for his services. After all, he reasons, his new kit has several colors and even saddle soap and a new brush while his old home-made kit was furnished with only two colors and an old brush. He admitted, however, the price might drop in instances where the customer balks at the "high" price on a slow business day.

Butch, on the other hand, still charges 10 cents but he admits his only two months experience at the trade is a factor in the price. Also, he has a home-made kit and would feel awkward at charging as much as Dennis does.

"I was kinda scared and embarrassed when I shined my first shoe," Butch said. "I was afraid I would do something wrong since I had never shined before and nobody taught me."

Most of the boys continue with the job until they reach high school age and can get better paying jobs with regular hours.

Dennis thought his retirement age would probably be 14 or 15, but Butch was unable to predict that far in the future.