Planters Mill and the cove 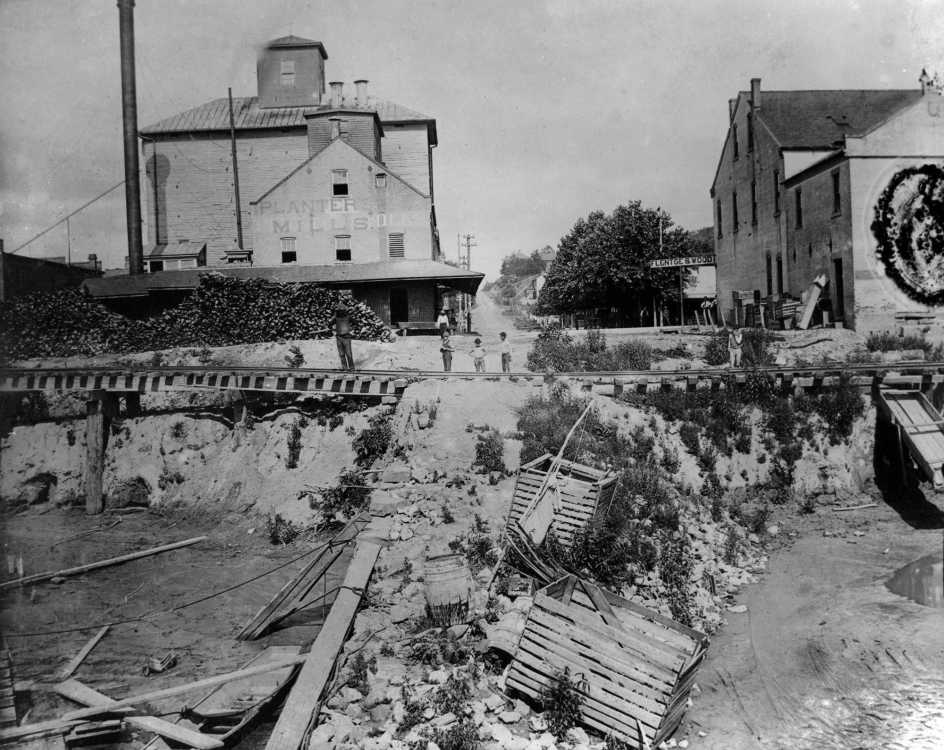 Some very interesting pictures are being brought in by citizens for The Missourian's 25th anniversary edition to be issued Oct. 3, 1929.

Chester Kassel, local photographer, submitted a good print of a picture made considerably prior to 1904 showing a view from the river looking up Independence street. The old Planters mill stands to the left with a gigantic pile of wood along the east side. On the other side is the mercantile building that still is there and a sign shows it was then occupied by Flentge & Wood. A row of large trees along the Independence street side nearly hid the building that is now occupied by a "dime store," and the view out Independence looks like a country lane.

A rickety railroad line extends along the river front on piling. At that time the river cut in nearly to the mill, leaving barely enough space on the east side of the mill for a wagon road. The river bank shows some skiffs, some fish cages and much rubbish. While very few pictures taken prior to 1904 will be used in the anniversary edition, this one will because it will appear alongside one taken from the same spot showing the river front today. The comparison will indicate plainly the trend of development in Cape Girardeau because the Cape's river front is not equaled by any other city or town.

This previous blog shows what was done about the unsightly cove at the riverfront.

At 5 o'clock on the morning of March 27, 1909, a disastrous fire broke out at 105 Independence Street. It spread east to the Planters Mill at 101 and 103 Independence Street. A large flour mill, a wood framed elevator, warehouse, and contents were destroyed. It was estimated the mill lost an inventory of 3,000 bushels of wheat, 750 barrels of flour, 350 sacks of bran and short (a mixture of bran and coarse flour). Estimated lost to the mill was $50,000. F.W. Pott was the proprietor of Planter's Mill, and it was reportedly constructed around 1877. The elevator had a capacity of 50,000 bushels, and the mill offered the Patent, Planters Mill, Alma, Jewel, Staff of Life, and Choice brands. The Planters Mill and Staff of Life flour won premiums at the district fair in 1880. Their slogan was "Our Flour Recommends Itself." The fire that consumed the mill originated in Peter Maul building, in the rear of the upstairs apartment of Mrs. Jones, a widow, whose apartment was destroyed. Located in the downstairs of the bilding was Lomax's second-hand furniture store. The total loss for the Maul building was estimated at $5,000. The fire swept to the west to 107 Independence and damaged the F.W. Vogt tin shop and his family's residence upstairs with a total loss of $3,000. To the south of the mill was the City Laundry, which was badly damaged. Herman Bock, the proprietor, estimated the damage at $4,000. W.A. Summers spotted the fire and reported it to the telephone central office, which gave the general fire alarm. The fire department quickly arrived on the scene.