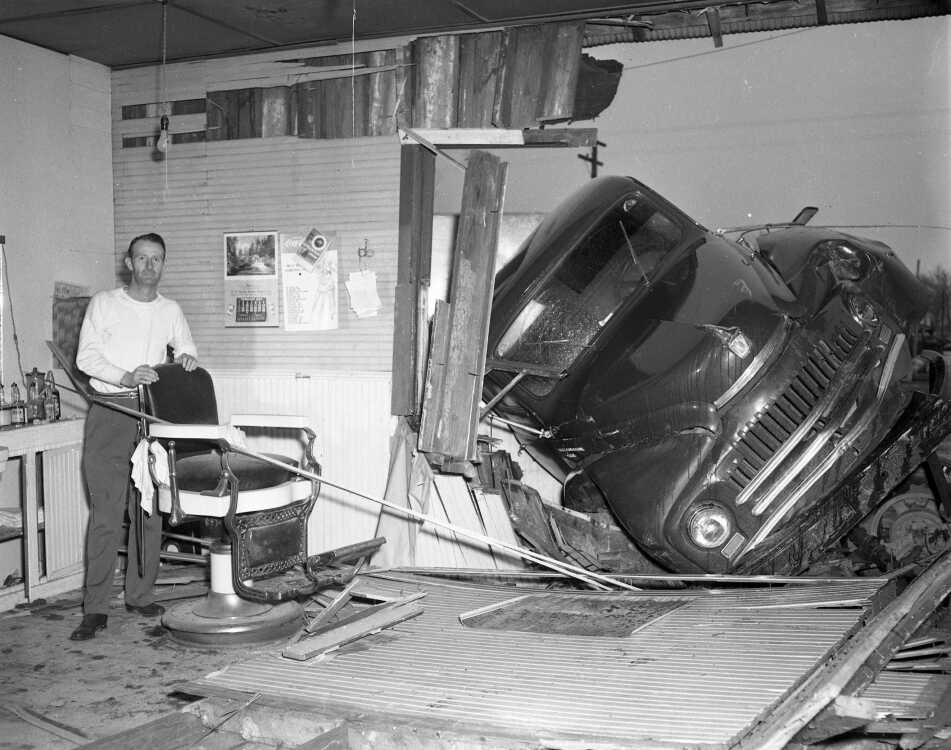 Plunging into a barber shop at Delta, a truck driven by Lawrence R. Davis of Cape Girardeau knocked a wall into the shop Sunday morning. Owner of the shop, Orville Duncan, surveys the damage. Railroad tracks threw the vehicle out of control. Slick pavement also was believed to be a contributing factor in the accident. Nobody was injured. (G.D. Fronabarger photo)

A milk truck driven by Lawrence R. Davis, 29, of 1307 North Spanish street, missed a curve at Delta at 5:55 a.m. Sunday and crashed through the wall of a barber shop.

Orville Duncan, owner and operator of the shop, was asleep in quarters in the rear of the building where he lives with his wife and three children.

The truck knocked the wall flat into the shop, scooting a stove across the room to the opposite wall. The truck overturned, demolishing the front undercarriage and doing other damage to the vehicle.

Mr. Davis was making milk pickups from farmers in the area. He had five full cans of milk in the truck and a load of empties.

The vehicle swerved out of control when it went over railroad tracks crossing the highway. Instead of negotiating a curve to the right, the truck went left, striking the shop.

State Highway Patrol Trooper I.E. Beard cited Mr. Davis for failure to have a chauffeur's license and for improper identification on the truck. State law requires that the name and address of owners and weight of trucks be painted on the cab, the trooper pointed out.