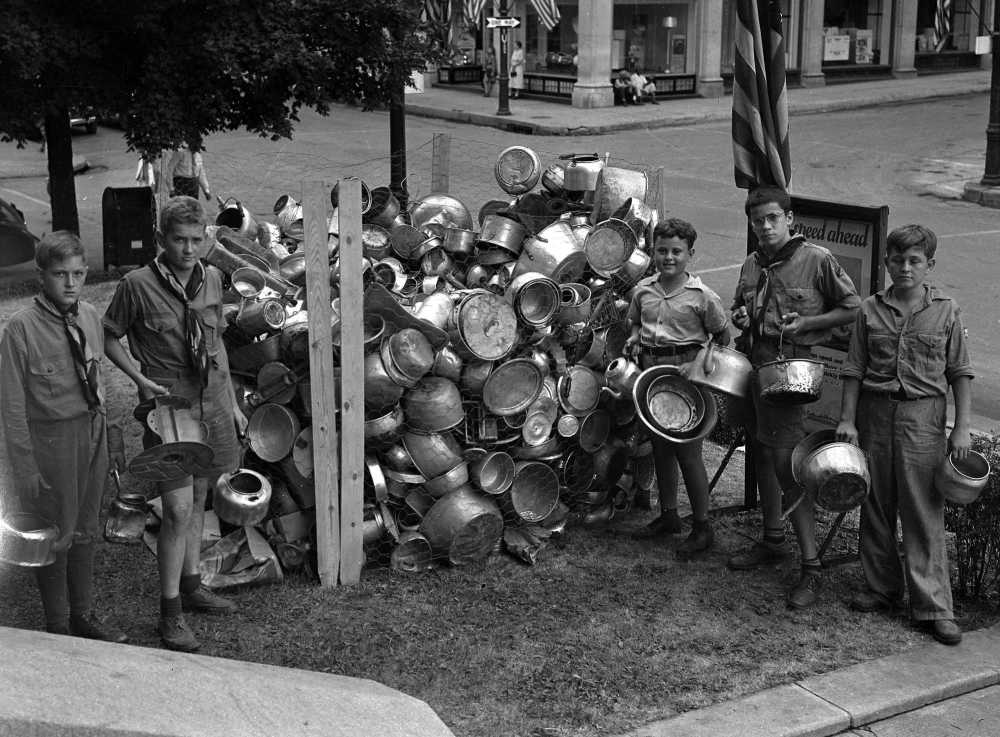 During World War II, Boy Scouts in Cape Girardeau frequently took the lead during scrap metal collections, canvassing the whole city for pots and pans. Here several youths stand next to a mound of donated goods in the front yard of the Federal Building at the southeast corner of Broadway and Fountain street. (G.D. Fronabarger photo)

A concerted drive for scrap aluminum in the Cape Girardeau Boy Scout District was planned Friday night at a meeting of scout leaders of the three-county area at the Public Library, presided over by Vincent A. Kogge, who was elected chairman of the campaign.

The drive, part of a state-wide effort to aid in the National Defense program, will be conducted not only in the communities of the district, but in rural sections as well. It has been emphasized that only discarded aluminum utensils are needed in the program.

Representatives attending the meeting were told that in each of their communities a general chairman, publicity chairman and arrangements chairman should be named immediately. These men will take charge of the construction of bins in which to place the scrap metal, its collection, and the campaign to bring it before the public. Each town was assigned a rural area in which the campaign will also be carried out.

Throughout the war, Boy Scouts were instrumental in collecting items needed to aid the cause. Nationally, Boy Scouts collected everything from 100 train car loads of peach pits and nut hulls, used to make charcoal for gas mask filters, to 750 tons of milkweed floss, used in life jackets. Scouts also conducted a national census of black walnut trees, used in making gunstocks and airplane propellers, locating enough to fill 5,200 rail cars.

Four cannons from the Common Pleas Courthouse grounds at Cape Girardeau were donated to the government. A farmer from Bollinger County contributed an old 10,000-pound Case tractor.