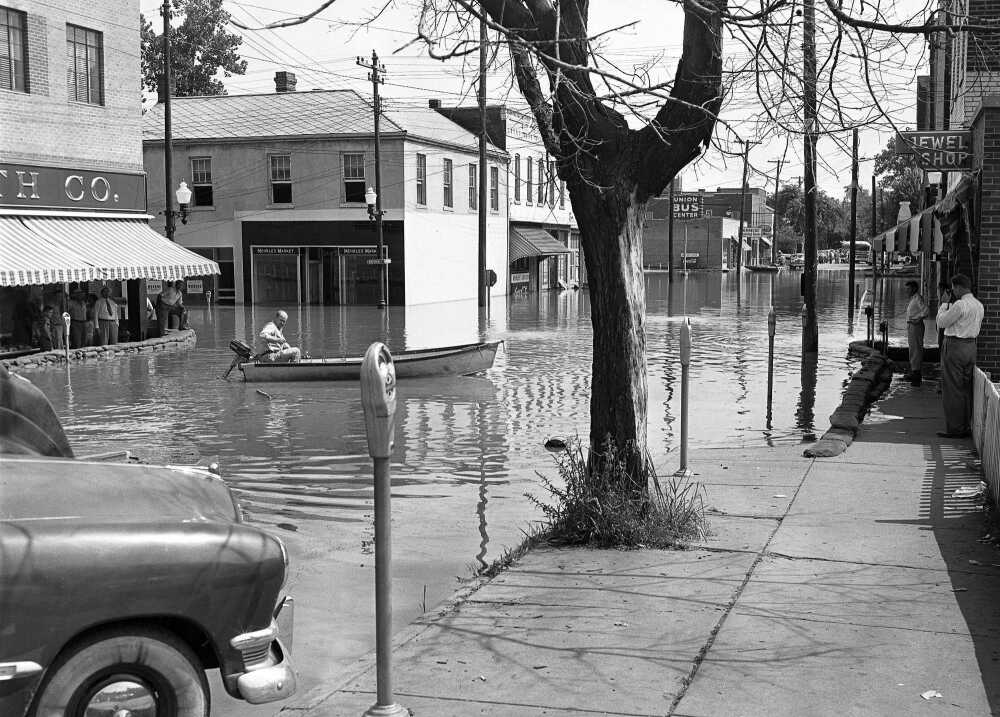 G.D. Fronabarger took this picture for the July 26, 1951 edition of the Southeast Missourian. It shows the intersection of Spanish and Independence streets.

F.W. Woolworth Co. is sandbagged on the corner at left. Mehrle's Market is across the street.

Two buses can be seen parked in the street south of Union Bus Center which is flooded.

The high water having shifted away from Kansas City and St. Louis, Cape Girardeau is beginning to get its share of the publicity over the antics of the Mississippi River. One St. Louis newspaper headline this morning read: "40.28-foot Crest Here as Flood Sweeps Down to Cape Girardeau." Caption with a picture says "Cape Girardeau, with the only unprotected water front between St. Louis and the Gulf of Mexico, is doggedly sitting out the flood. Pumps are going night and day in the historic little city 150 miles south of here. Stores have built ramps to second floors and much travel is by motorboats." What isn't said, of course, is that in area less than 5 per cent of the town is affected, leaving 95 per cent high and dry."

Keeping up with the times, the Gately store, which has all the water it needs, but is still in operation on Main street is advertising wading pools at a reduced price. Of the type which has proven so popular, the 50-inch plastic pools are designed for the entertainment of the younger children. Despite the handicap of water in front, at the back and below, Gately's is still doing business at the same old stand.