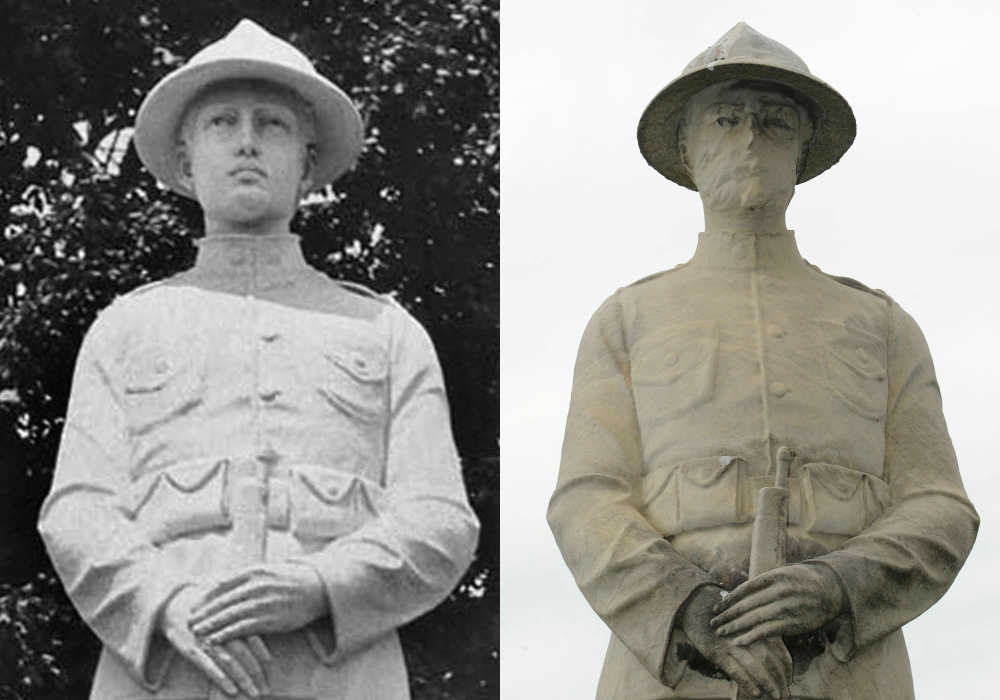 The World War I memorial at the Cape Girardeau County Courthouse in Jackson, Mo. has stood since its dedication in 1925. The undated photo from a post card, at left, is shown with a picture taken in 2011 of the soldier statue.

Here is a picture of the memorial and courthouse taken in 2011.

The county court has let the contract for erecting the memorial to the World War veterans to John H. Sander of the Jackson Marble Works for the contract price of $2200.

The plans submitted call for a statue of marble about twelve feet in height, representing a soldier in full uniform and holding his rifle before him "at ease."

Mr. Sander will have the statue made in Eastern marble works, and will guarantee a good piece of workmanship.

The pedestal upon which the statue will rest in the yard of the court house will very likely be made here, and will bear on the front side a bronze plate, bearing the names of the soldiers and sailors who lost their lives in the World War.

Plans and specifications of the monument as submitted to the court include a complete drawing of the statue, and from that it can be seen that it will be really artistic and a thing of beauty.

Still the statue which is to adorn the public square as a memorial to the soldier and sailor dead from Cape Girardeau County who gave their lives in the service during the World War, reposes in the original packing at the Sander Marble Works. It is a beautiful piece of work, made out of white marble, and technically correct, representing a soldier standing and holding his rifle "at rest." Every detail is carried out perfectly, the life-size figure wearing the regulation uniform and steel helmet.

The statue has been here for more than six months, and the contractor is anxious to erect the same. Since it is almost impossible to procure a complete list of the names of the boys who made the supreme sacrifice, it has been suggested that the inscription on the memorial be simply "In Memory of The Soldiers, Sailors and Marines Who Gave Their Life in The World War," or some similar wording. The erection of the memorial should be no longer delayed.

The concrete foundation for the world war soldiers' memorial has been completed and is now ready for the erection of the statue and the bronze plate to be placed on the base thereof. The monument will stand about the center of the southeast quarter of the court house lawn, and near it will be the unsightly old cannon of ante-bellum vintage.

Favored by splendid weather, the dedicatory ceremonies over the soldiers' memorial in the front of the court house took place last Saturday afternoon as per schedule. The addresses by Prof. R.S. Douglass and by Congressman Ralph Bailey were good and well received. The music by the Cape Girardeau Community band under the leadership of Dr. C.E. Schuchert, the service of the Cape Girardeau Boy Scout troop under the command of Captain Nielsen, and the drill by the detachment of National Guard, all joined to make the occasion what it should have been.

The plaque on the monument reads:

In memory of those from Cape Girardeau County who gave their lives in defense of liberty in The World War.