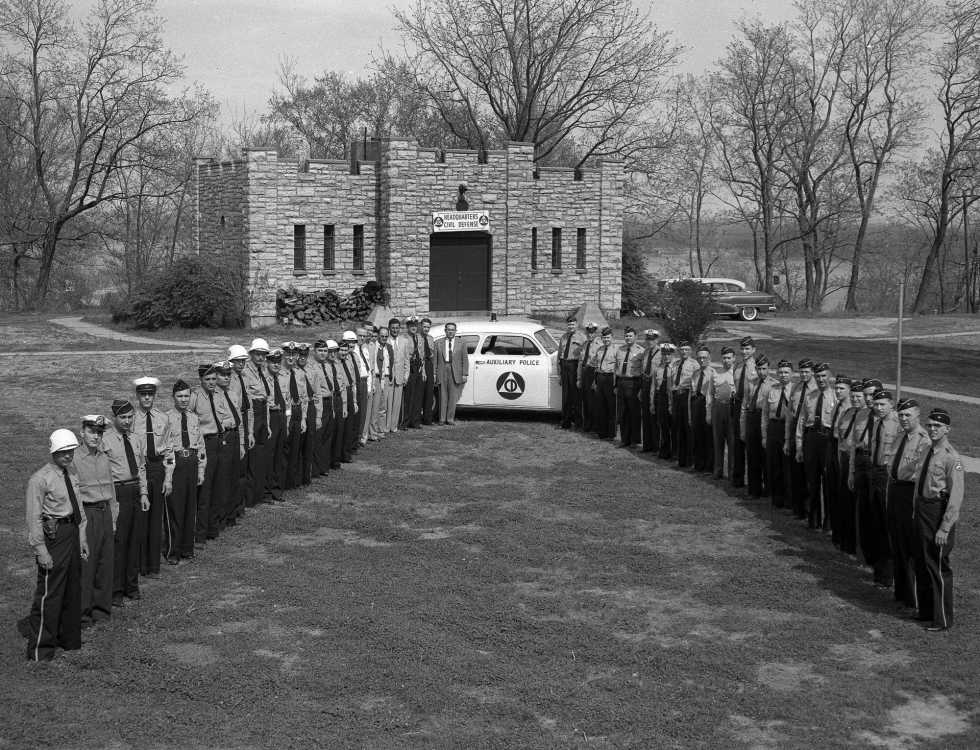 The Cape Girardeau Auxiliary Police lined up at Fort D with their training patrol car, donated by Harris Motor, for this record photo. The men are formed according to squads. Present for the picture was Commissioner J.L. Wieser, defense director, who is in civilian clothes to the left of the civil defense emblem on the patrol car. Auxiliary Chief Bob Eckelmann is standing to the right of the car emblem. (G.D. Fronabarger photo)

25,000 citizens of Cape Girardeau will be guided to safety by the members of the Auxiliary Police in the event the city is threatened by enemy bombardment.

85 men, in training for over two years, will man 27 street intersections over the city to help in the evacuation of civilians.

As members of the city police force, with the rating of special officer, Auxiliary officers serve without pay. On-the-job training is bolstered by regular classroom work.

The Auxiliary unit has served in one tornado and stood ready to aid for 19 hours during a second alert. The men have participated in a manhunt for 2 burglars in the Lutesville area.

When a young girl was lost in a wooded area north of Cape, the officers left their jobs on a Saturday morning to make the search.

Traffic direction, being the main duty of the officers, has been handled at the 4th of July and V-J Day picnics and at an Easter egg roll. Other activities such as the district fair and theatrical shows where extra traffic officers were needed has seen auxiliarymen on duty.

In good weather the officers fire their service revolvers once a week at the Cape Girardeau Police Revolver and Pistol Club range on the Gordonville road.

Cape businessmen have donated over $1500 to the Auxiliary and Harris Motor Co. gave the unit a car for use in training the special officers.

Auxiliary Police officers drew their first uniforms on April 21, 1955 following a year of training in first aid and police work.

A public swearing in ceremony for the initial class of 57 officers was held at Junior High School Auditorium on April 15, 1955. Prosecuting Attorney Stephen Limbaugh was the principal speaker.

Auxiliarymen took part in the nationwide alert on June 15, 16 by manning a communication post in the Arena Building. Earlier street intersections were guarded as they would be during an actual evacuation.

The Auxiliary Police of Cape Girardeau served as hosts for the state convention on Oct. 29-30, 1955. A Mock Evacuation of the city was held under the direction of Capt. F.L. Schneider of the Cape Girardeau Police Force and Col. Lloyd Link and his motorcycle unit from St. Louis County.

Capt. Schneider, acting chief of the Cape Girardeau Police Department, is the special police training officer for the Auxiliary unit and has acted as Liaison Officer between the regular and reserve force.

FBI Agent John Bush of St. Louis acted as the organizer and instructor of the Cape Girardeau Auxiliary Police unit after returning from an orientation trip to Britain to learn first hand the basic rules of civil defense under actual enemy bombardment.

Police Chief Marshal Morton was named head of the Auxiliary Police and became their training officer.

Later a uniformed Highway Patrol was formed with Trooper Morley Swingle acting as the instructor.

Members of the World War II Auxiliary Highway Patrol were:

Here is a previous blog about the Civil Defense fallout shelter at the Arena Building.