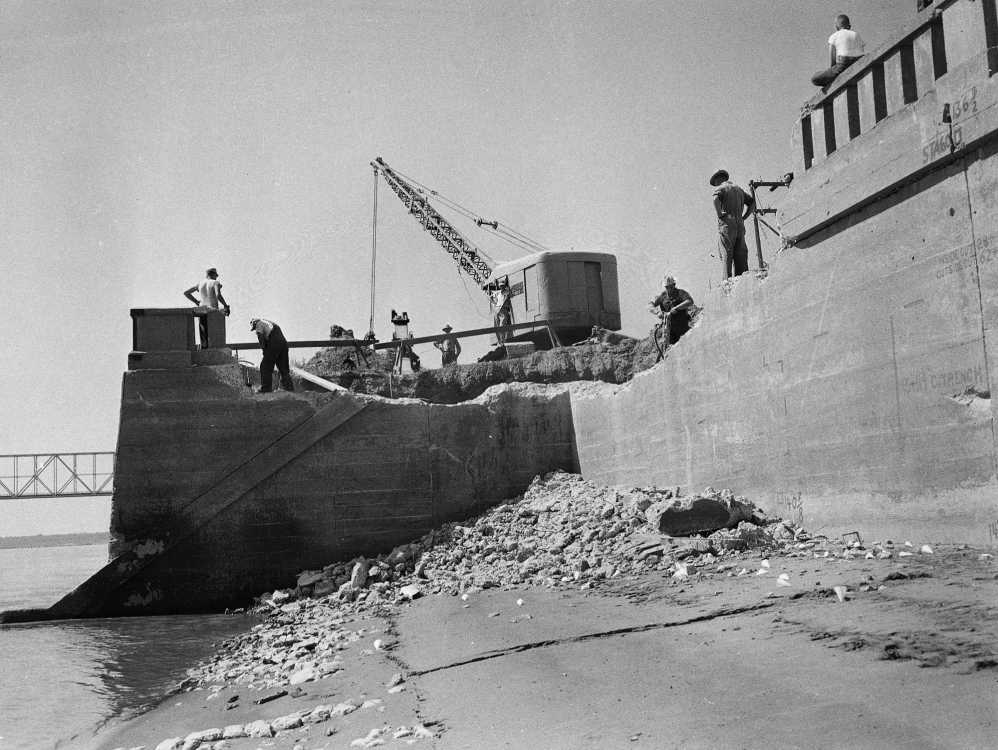 A section of the original concrete wall along the Mississippi River is being wrecked to make way for another and higher one. The original wall was built back in 1916 by the Frisco Railroad to permit the filling of the area where the passenger station now stands. (G.D. Fronabarger photo)

What was the purpose of this concrete wall? Here is an explanation:

Workmen encountering difficulty with slides and with such things as railroad steel and ties, washtubs, brickbats, beer bottles and tin cans, as they try to lay a deep sewer along South Main street may be interested in knowing that they are digging into a section of our town that less than 50 years ago was only a slough of the Mississippi River.

Back a half century ago Main street proper stopped at Independence street, and the meandering Mississippi, starting at Independence, had cut a half-moon cove in the bank which in high water was almost deep enough to float a steamboat and in low water was an ugly mess, convenient and practical for dumping but good for little else. Hence the varied type of things the sewer people are finding.

The cove was, in fact, so pronounced that the east entrance to St. Vincent's Church could not be used, and members entered the church from Spanish street.

South from Independence on the west side of what was then known as Aquamsi street there was room for some business establishments and houses. The Planters Mill, quite a big structure in those days, was on the corner of what is now Main and Independence street, while a bit farther south was the Herman Bock laundry.

However, on March 27, 1909, fire destroyed the Planters Mill, leaving only a hulk that stood for years. Seven years later, on Oct. 16, 1916, the laundry which had been acquired by J.A. Rigdon from Mr. Bock and which had survived the mill fire, also was destroyed.

Ruins of the old mill and the continued dumping of debris finally served to focus attention on the cove and when the Frisco Railroad sought to renew its franchise with the city the filling of the low area, and the building of a seawall to make the fill possible, were included as a part of the requirements.

Because its railroad had to follow the edge of the cove, making for a slow tortuous passage and frequent maintenance, the Frisco wasn't slow in getting started, and once the plans were approved in 1914, the job was begun.

However, cold weather interfered with work on the seawall late that year, and in 1915, because of the high stage of the river, little could be done. But on Jan. 6, 1917, the first trainload of dirt, moved in from Froemsdorf, in Scott County, was dumped into the fill and thereafter the work was speeded.

In the years that followed, the two drives on South Main were laid out, and subsequently paved, and in 1921 the Frisco built the present passenger station.

As a part of the contract, the Frisco put in lovely gardens in the parkways at the depot and between the two drives, and for many years, under railroad maintenance, they were places of beauty.

The reclamation of the South Main street sector marked an important era in Cape Girardeau's history, a fact that is worthy of mention as workmen dig deep into the one-time mire to bring another change to a section that has been so long identified with the life of the community.