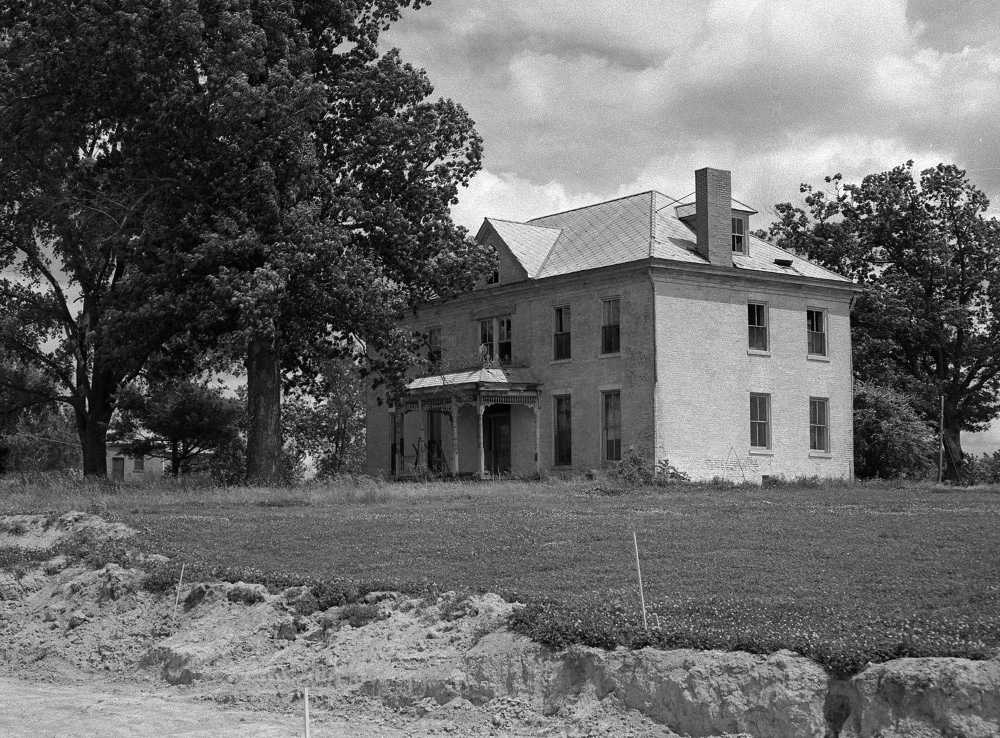 The old Haas house, built about 1858, will soon be torn down, removing the city's last physical link with the Civil War and one of the oldest landmarks in the community. The house was built by Alfred T. Lacy, cashier of the city's first bank and mayor of the town in 1851 and 1852. If Thilenius street should be relocated, the large trees would be removed and the street would come almost to the front porch of the house. Razing of the house has been ordered by the Board of Education. The school district owns the property. (G.D. Fronabarger photo)

The house was located one block south of Broadway near the current Central Middle School, formerly the junior high. The high school building (currently the junior high) was built to the south on the same campus.

Haas House, Old Landmark in Cape, to be Torn Down

Another old Cape Girardeau landmark, its last physical link with the Civil War and a showplace in days gone by, will soon be razed because it has fallen into poor repair and there are no funds with which to restore it to its one-time beauty.

It is the ancient gray brick house that sets atop the hill facing Broadway on the new high school tract. Now known as the Haas House for its last private owner, the large dwelling knew better times in ante-bellum and post-bellum days as the Lacy House.

The Board of Education this week ordered advertisements to be run for the razing of the structure. At one time, when the grounds were purchased, there had been a thought that the house might be converted into administrative quarters.

This idea was soon abandoned, however, and for several years it has been planned to remove the structure. Before the school district acquired the property it had deteriorated. Since then there has been little effort to maintain it, although it was used for storage at one time.

School officials report it would take a considerable sum of money to put the building back into shape, and with the need for new school rooms and space they cannot justify such an expenditure of school funds.

Historical notes show the house was built about 1858 by Alfred T. Lacy, cashier of the city's first bank and the mayor of Cape Girardeau in 1851-1852. The ground on which it was built was first owned by Louis Lorimier, founder of the city 150 years ago.

Miss Amy Kimmel, in a series, "Historic Houses of Cape Girardeau," written for The Missourian in 1933, recalled that at one time there was a pond near what is now Broadway and a small stream meandered through a nearby meadow.

She said the house had a flower garden to the east and in front, and a vegetable garden in the rear. Miss Kimmel said she had been told that in its early days the two-story residence had a porch across the entire front. Servants quarters were in the yard, with two rooms upstairs, and a laundry and two rooms downstairs. There was a large brick barn and a spring and spring house nearby.

Several accounts have been told of the house during the Civil War skirmish that has become known as the Battle of Cape Girardeau. One is that it was a command post for the Federal troops which occupied the city.

At any rate, there is no doubt that it was directly in the line of fire between the besieging Confederate forces and the Federals who manned the city's forts. The battle raged all around it Sunday, April 26, 1863.

Historian R.S. Douglas reports that the Lacy family took shelter in the basement during the skirmish. A shell set fire to the roof and a Negro servant risked his life to go up to extinguish the blaze.

Several Confederate soldiers were reported buried beside the spring that served the house. They were buried by Mrs. Rodney, a sister-in-law of Mrs. Lacy; Alfred Lacy, a son; Miss Priscilla Autry and Ika, a colored man, history relates. For a number of years afterward, it is told, the Negroes of the neighborhood told stories of the "haints" of the soldiers returning.

Shortly after the war the property was purchased by Amzi Leech, who christened it Melrose. James Fullerton purchased it from Mrs. Leech, and Joseph Haas obtained it from the Fullerton estate. It passed into school district hands from the Haas estate.

Just after the war, apparently before Leech acquired the property, it was owned by S.R. Burford, member of a pioneer family, who announced in the June 26, 1867 issue of the Marble City Weekly News that on Sept. 2 he would have a shooting match to dispose of the 60-acre tract which included the house and outbuildings.

The house contained, he said, a good cellar, brick meal and meat house, brick ice house, a large and well-constructed two-story stone and brick barn built in 1865, a frame cottage with three rooms about 200 yards back of the dwelling, a smokehouse, three good cisterns, a young orchard with 100 choice fruit trees.

He planned to sell 400 tickets for $5 each. Numbers of these would be placed on a circular piece of paper placed on a board. The board was to be hung by a nail in the center so it could be spun like a pinwheel. Then a shotgun was to be fired at it from a distance of 40 yards as it spun. Only one shot was to be fired. Numbered squares with shot nearest the X in the center were to be winners.

There is no record of what happened after this announcement. Additional copies of the Marble City Weekly News cannot be found, and it has not been determined if the match was actually held. At any rate, Amzi Leech became next owner.

View 19 comments or respond
Community discussion is important, and we encourage you to participate as a reader and commenter. Click here to see our Guidelines. We also encourage registered users to let us know if they see something inappropriate on our site. You can do that by clicking "Report Comment" below.