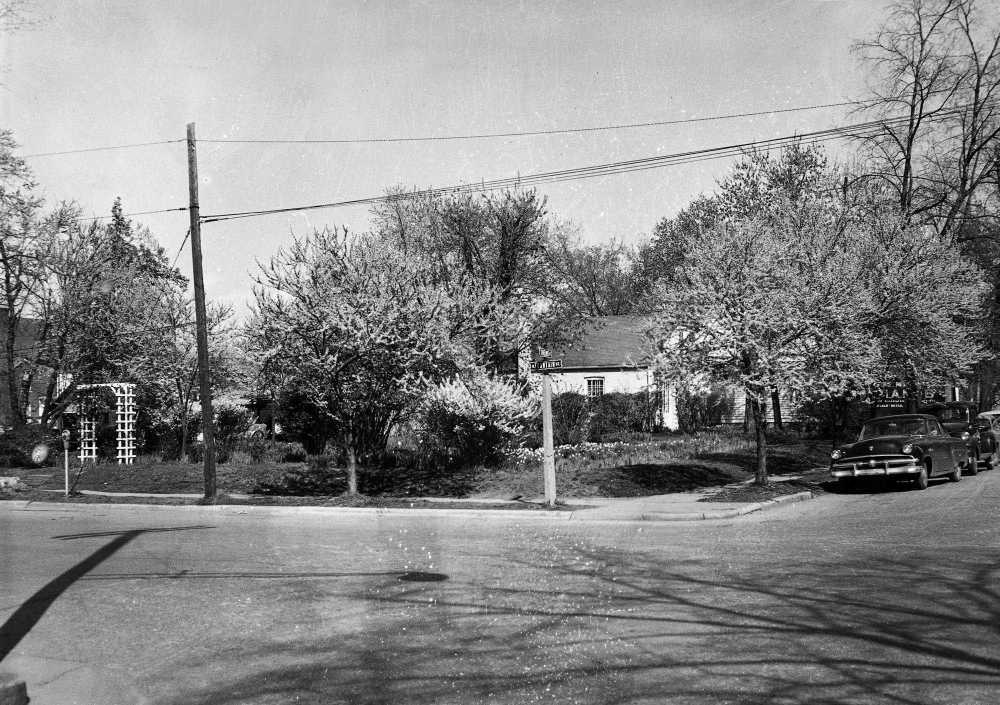 The May Greene Garden was photographed by G.D. Fronabarger at the corner of Themis and Fountain streets, likely before 1963. That is the year the May Greene house, 324 Themis, visible to the east of the garden, was sold to the highest bidder on the steps of Common Pleas Courthouse. The house was razed in 1964.

Click to see a color photo of the May Greene house and garden along with historical photos.

Here is the story of the May Greene Garden from Southeast Missourian files. The author is unknown:

The small garden at the corner of Themis and Fountain and directly behind the Federal Building is named the May Greene Garden. To understand the significance of this historical spot we need to look back at the life of this wonderful lady, Miss May Greene.

On May 7, 1861 Miss May was born at Marble Hill which at that time was called Dallas. Her father was state Senator George Greene and her mother, Ruth Templeton Greene. They moved to Cape when she was about 7 or 8 years old. Her mother planted a garden in a cultivated spot to the west of the yellow brick house. May walked haltingly with the help of a crutch. When a small child she injured her leg in a fall and it never healed properly, but this never seemed to hold her back in any way.

Her father was very interested in education and was president of the city's first school board. He wrote the contract for the construction of Old Lorimier School which was the first public school building in Cape Girardeau. It was completed in 1878. Prior to that time, public education had been held in the Presbyterian Church. The next year, 1879, at the age of 18, Miss May became a teacher at Lorimier. She also taught five years at Old Broadway School, which is now the Medical Arts Building, became the principal of Old Lorimier School and finished her teaching years as principal at Washington School.

In 1921, when Miss May had been in the system 42 years, the board of education honored her by naming the new school in the south part of the city May Greene School.

On the occasion of her 50th year of teaching in 1929, the entire town honored her with a celebration at Houck Field House. A formal presentation of $500 in gold pieces was given to her as a token of appreciation for her work.

In 1932, Miss May completed her 53rd year in the classroom at the age of 71, and she quietly retired, telling superintendent J.A. Whiteford on the last day of school. The St. Louis Post Dispatch had a tribute to her with this quote:

"Miss May went slowly away closing behind her the school door. Back in her old-fashioned home, where she had lived since she was eight years old, she sat in her window corner and looked out into the garden that her mother planted."

Her triumph over the frailty of her leg brought encouragement to all with whom she had contact. She made regular contributions to the Crippled Children's Society and upon her death in 1948, the family requested that money be given to that society in lieu of funeral flowers. The pupils at May Greene School pooled their change and started a memorial fund. Her death occurred just before her 87th birthday.

Mrs. Nell Nicodemus, Miss May's half sister, had come to live with her with the understanding she should continue to live there until her death. When this occurred, there were no other family members here and it became necessary to place the property on sale to the highest bidder from the steps of the courthouse in December 1963. It then became the property of the First Federal Savings and Loan.

The next year, 1964, First Federal razed the little yellow brick house for the present parking lot. The General Services Administration of the federal government acquired the Post Office and the garden corner at this time. When the Post Office was torn down, there was talk of turning the garden also into a parking lot. The newly organized Cite de la Rose Garden Club took on the task of saving it from being buried under concrete. In 1968 they worked hard to gain permission from Uncle Sam to restore the garden, even appealing to Lady Bird Johnson who responded with a letter of assistance. The club was allowed to lease the property on a series of 3-year leases. They planted and cared for it until the club folded in 1980, when a few faithful members carried on alone for three more years until all their money and energies were exhausted.

It was during this period when the red bud and dogwood trees were at their peak of beauty that the garden captured the hearts of Cape Girardeau.

So, in 1983, the garden once more reverted back to the federal government. Without the tender loving care of true gardeners, with indifferent mowing practices, as well as age, the garden deteriorated rapidly. Trees became damaged and had to be removed, and the constant mowing of the bulb tops cause an end to their blooms. All that remained was one lovely magnolia tree that the garden club had planted and a sea of Bermuda grass.

Five years later, March 1988, the need for more employee parking again came up, and the General Services Administration started to make plans for concreting the garden in June. When this news became known, Cape's Park Department called a meeting urging interested citizens to once more try to save this mini spot of beauty in downtown Cape. A small but dedicated group responded and started the ball rolling. The Missourian published a stirring article by Judy Crow which gave a much needed push and in April, the City Council added their support. Congressman Bill Emerson's influence was sought to halt the plans for the parking lot construction and to buy the time needed to get a restoration movement organized.

It worked, and in April 1988 the GSA announced their would be no parking lot built there and we were free to start work. Their decision was aided by the announcement from Trinity Lutheran Church that the federal employees were free to use 25 needed parking spaces from the church parking lot a block away.

July 11, 1988 an organization meeting for the May Greene Garden Association was held and a list of immediate needs to start the project was drawn up. It was formidable and any sensible group would have said, "Forget it!"

2. No usable water line to the property. It was buried under First Federal's parking lot.

3. Bermuda grass must be killed and new grass planted before winter.

4. We would get no help from the parks department until all planting was complete.

Upon investigation, a new water line to the property with a sunken boxed faucet would cost $650. Still no money!

So began our continuous drives for donations and volunteer help. Harry Bertrand came through with help on removing the Bermuda grass and planting good grass, and our telephone fund drive bore a small stream of funds. We were shakily launched.

We next held an October afternoon tea on the garden site, where people could buy a specific tree or shrub from the landscape plan that Jim Logan had drawn up. Success! We sold all the trees and received some small donations. We decided the two chatt walks should be replaced with brick ones. Since the old shoe factory was being taken down at this time, we had a ready supply. This was a great idea, we thought, until upon delivery we discovered the bricks were free, yes, but we were presented a bill of $500 for cleaning them. So much for communication!

Another money making project was launched. Gardening aprons. During this period, I almost lost may happy home for my husband would arrive home to a house full of friends with their sewing machines, cutting sheers and half-finished yellow aprons everywhere. Fortunately over 100 people bought them, paying 8 to 10 dollars raising the needed $500 for cleaning the bricks.

However, we were not out of the financial woods yet as the city would not take over the maintenance until the garden was completed. Here we were with several thousand bricks stored on the spot where the azaleas and Dave Niswonger's iris bed were to be planted, and no one had come forth to lay the brick sidewalks, and there were no funds to buy mortar or sand, and no city help until these were planted. Furthermore we were being charged each month for water and trash pickup and occasional mowing when we ran out of volunteers. These bills continued to eat up our meager bank balance until by August we reached a low of $7. So in desperation, this hot summer of '89 we limped through with an S.O.S. letter writing campaign which brought only a small amount. We frantically appealed to the city for a refund of the trash bills, and that came through, which helped, but it was apparent another fund drive had to happen immediately.

The telephone is a wonderful invention and the mails still do go through. This time there were more fruits of our labors and Elmer Hawn, a retired brick layer, agreed to build the sidewalks, saving us $300. Under his tutelage, Jim Logan became an accomplished mucker and hod carrier. The money began to come in, in answer to our frantic pleas, and arrived just in time to pay the concrete and sand bills.

And so, in the fall of 1990, we volunteers went to the garden with its handsome brick sidewalks, new azalea and iris beds, to put the garden to bed for the winter only to discover vandals had been there first and one of the new dogwood trees was completely broken in two. Another bill. We went back again in the spring after again paying endless water bills that we had not been able to resolve, only to find that someone had enjoyed our four-foot-tall hemlock, probably at Christmas. Our faithful few payed $10 each in membership dues, and with that we bought mulch, bedding plants and fertilizer and squeaked through another summer.

In the fall of 1991, with the planting at last complete and the walks finished, we gratefully held a dedication ceremony, not one year after our optimistic plan of completion, but three years at present. The city now mows each week, we no longer must pay the water and trash bill and a generous young man Eric Vogt constructed an historical kiosk and May Greene Garden sign this year for his Eagle Scout project.

A small success story. the garden is in frequent use by visitors from the river boats, employees at the federal building, Girl Scout picnics and rest stops for walkers. There is something blooming from early spring until killing frost and the kiosk holds informatio on a bit of Cape history that you can show your out-of-town guests as well as your children or grandchildren. Volunteers still plant annuals, mulch the beds, water and give the garden TLC it needs in order to keep it a beauty spot for Cape. Please visit!