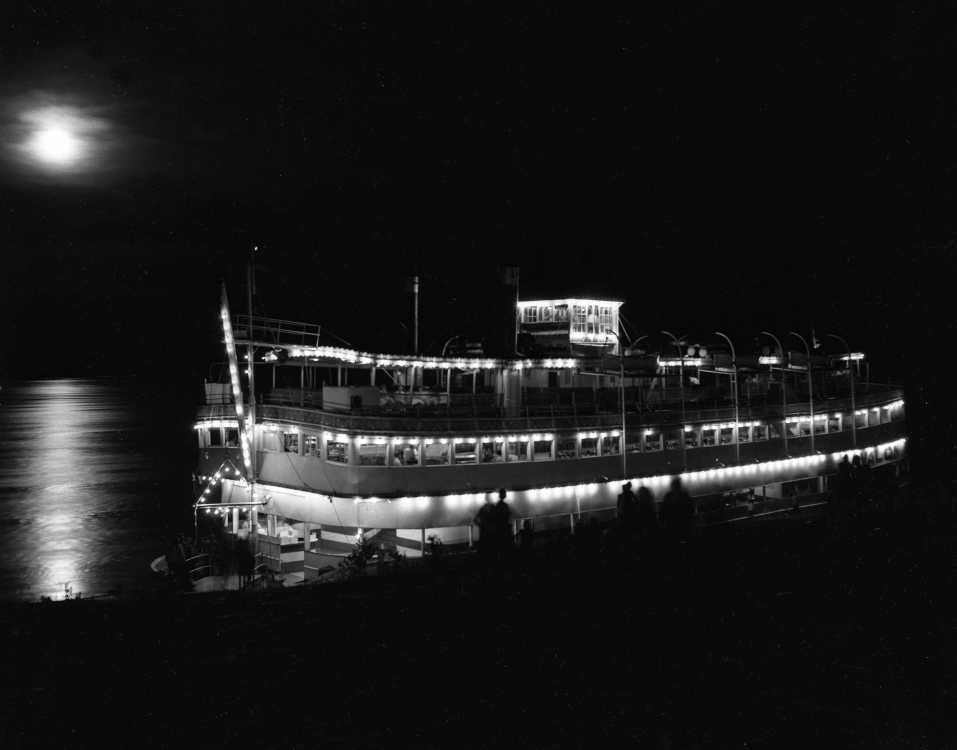 The Avalon excursion steamer operated from the Cape Girardeau riverfront in the late 1940s. G.D. Fronabarger took this picture of the boat one night.

This story in the May 11, 1948 Southeast Missourian announced one trip:

The Steamer Avalon will be here tonight for a Mississippi River excursion, the first in a number of years. The boat, it has been announced, is to depart on the cruise at 9 o'clock.

ON BOAT -- A large crowd of entertainment-seekers and persons attempting to escape the heat went on an excursion up the Mississippi River Wednesday night on the Avalon excursion boat. Many people were on hand to watch the craft shove off for the trip up the river and back.

Here is how the city of Cape Girardeau approached the enterprise:

Find No Way to Put Tax on Boat

Excursion Steamer Not Required to Pay

City officials dug into old ordinances yesterday seeking a means of imposing a license or other type amusement tax on the excursion steamer Avalon, which was here for an excursion Thursday night.

Their effort went to naught. A check of the city laws revealed that the one short-lived ordinance which would have allowed a tax was repealed three months after it was passed and that apparently no means has been found since to place a tax on amusement vessels plying the river.

The Avalon is unsponsored on its excursion here. In prewar years various local organizations serve as sponsored for the river excursions, sharing in the proceeds. Because of the local participation no consideration was given then to charging a fee.

Theory of a Tax

Officials considered the possibility of a tax on the theory that an outside interest was to give the excursion, receiving all of the money with neither the city nor its organizations receiving any return, although it was using city property for docking.

A check of old records showed that in May, 1922, the city passed an ordinance charging a $50 wharfage tax for excursion steamers. Then the Steamer Capitol came to town and refused to pay the charge. Vern Streckfus, its manager, hired attorneys to fight the tax.

Three months after the first ordinance was passed, the then city attorney, Edward L. Drum, told the council that the wharfage fee was illegal; that it did not comply with national navigation laws. The council repealed the ordinance and there has been nothing on the books since with regard to river vessels of any kind.