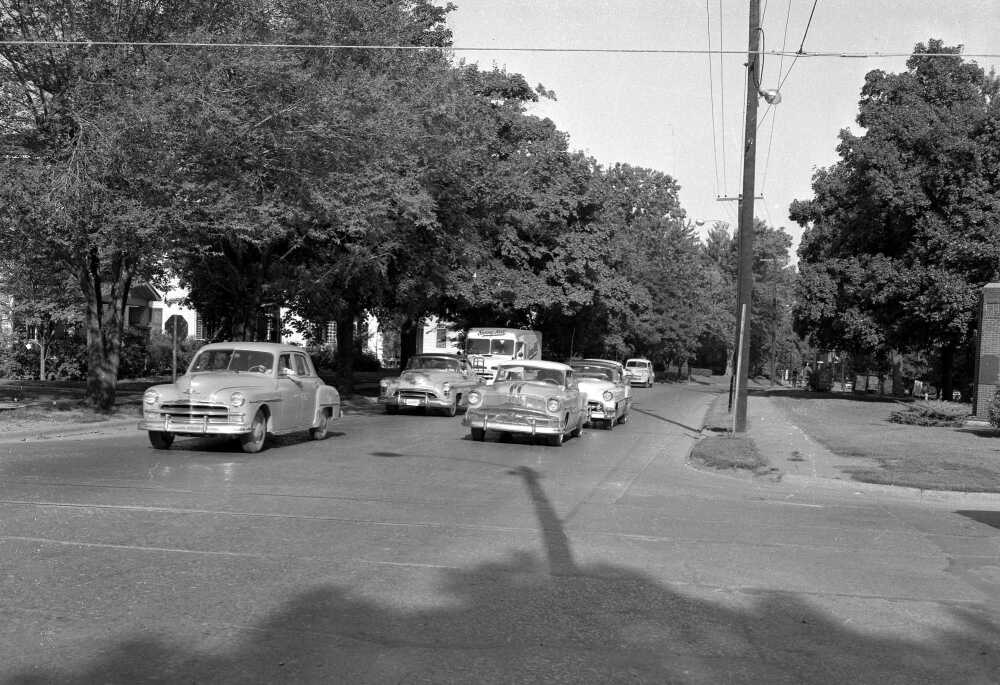 This picture shows one-way traffic on Broadway at West End Boulevard across from Freedom Corner in Capaha Park in 1956. Notice the houses and trees along Broadway and the stop sign. (G.D. Fronabarger photo)

The traffic control plan outlining city streets that will be converted temporarily into one-way thoroughfares in order to handle the heavy flood of traffic during the sesquicentennial celebration was announced today by the police department. A map with arrows indicating the direction of traffic flow is printed on Page 7.

Police Chief Percy R. Little has explained that in order to accustom local motorists to the traffic plan for the Sesquicentennial Week, Aug. 19 through 25, it has been decided to put the regulations into effect a week earlier, beginning Monday.

If local motorists know the special regulations and will cooperate in observing them, they will serve as a guide to strangers and nonresidents coming into the city, Chief Little explained. A special ordinance passed by the City Council gives police authority to enforce the regulations during the celebration and the period immediately preceding it.

Under the plan Broadway will serve as the main entryway into the city with traffic on it to move one way in an easterly direction. Independence street will serve as the artery leading from the city with traffic movement on it limited to one way in a westerly direction. Two other streets, William and Bloomfield, will provide two-way access to Highway 61.

According to a story in the Aug. 27, 1956 Southeast Missourian, traffic returned to two-way at the end of the celebration.

Chief of Police Percy R. Little acknowledged the one-way traffic program was intended for larger crowds than attended the city's sesquicentennial. But he observed that it served its purpose on the day of the major crowd on Monday, and if it hadn't been in effect, there would have been trouble. It was the only day of the week that it was really needed to handle the huge volume of traffic.