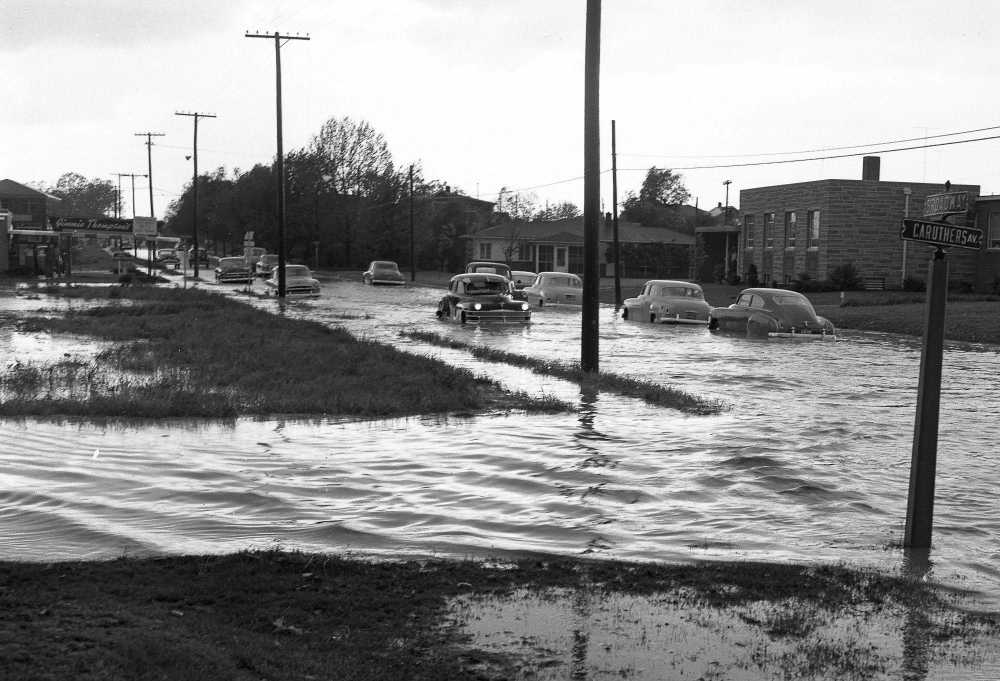 Cape Girardeau streets became rivers during Tuesday afternoon’s torrential downpour and windstorm. The accumulation of water at the intersection of Broadway and Caruthers avenue posed a big problem for east- and west-bound motorists when they attempted to negotiate the “little river” conditions. (G.D. Fronabarger/Southeast Missourian archive)

Jimmie Thompson's restaurant can be seen at the left.

Here is a previous blog about Jimmie Thompson's.

Torrential rains which struck Cape Girardeau and the area Wednesday night sent creeks and water courses pouring out of their banks, filled streets to above curb level, did isolated damage to houses and caused a considerable amount of damage to unpaved streets.

The rain measured 3.39 inches on the State College gauge and 3.11 inches on the riverfront gauge kept by Lee L. Albert. It began to fall shortly before 5:30 o'clock, coming from a heavy cloud that moved in out of the north and west.

At certain times, at the middle of the storm, large hailstones fell. Much was noted in the west central part of town.

The downpour intensified between 6 and 7 o'clock and began to pile up as creeks were filled by the continuing deluge. With these outlets unable to take the downpour, and with water pouring off hills into the city's low spots, streets began to fill.

West Broadway between Caruthers avenue and Forest avenue filled into its usual lake-like proportions as sewers filled to capacity and the water piled up. Numerous automobiles were stalled there.

Similar situations prevailed in other low places in the city, and traffic had to be cautious or cars would be drowned out.