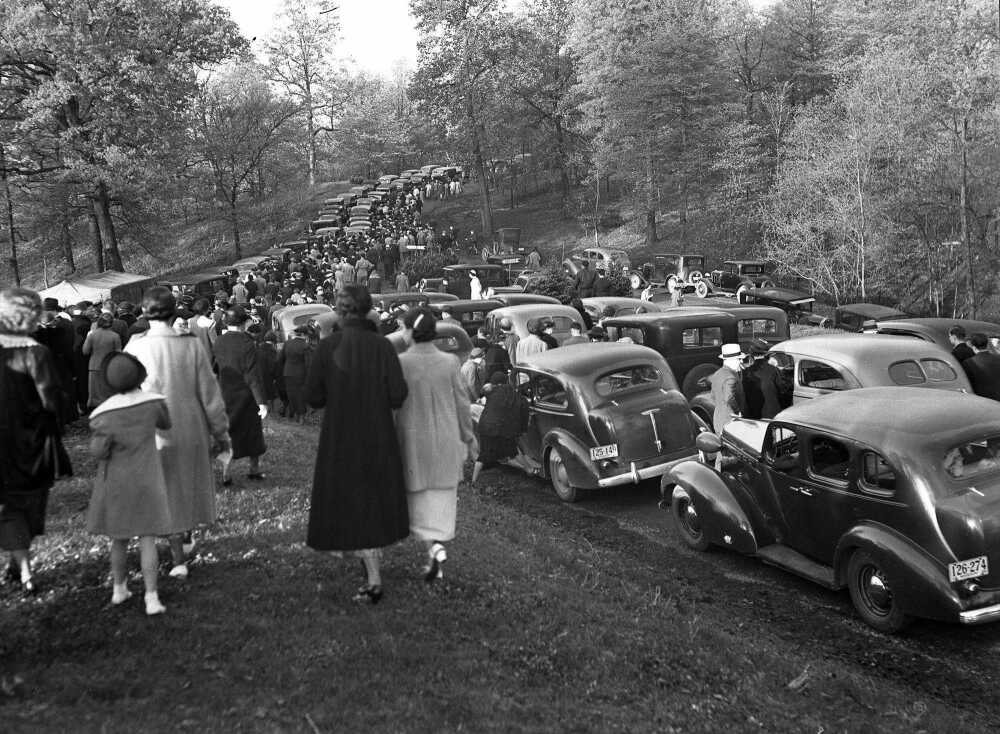 This is a view of part of the scene at Cape Rock Sunday morning as a throng of 3000 persons took their leave following the community Easter sunrise services. A part of the long double line of 1200 automobiles is shown in the picture. The photo was made looking southwest from Cape Rock. The crowd was the largest in the history of the event, sponsored by the Ministerial Alliance. (G.D. Fronabarger photo)

Dawn in all its brilliance was greeted by a big sunrise service crowd at Cape Rock. The sun coming through a slight cloud bank, cast the early rays over the Mississippi River as the worshipers bowed in holy reverence. Easter frocks were in evidence and temperature, standing at 65 degrees, made the atmosphere ideally pleasant without the use of topcoats and heavier wraps.

The crowd assembled as the musical prelude of organ, bells and chimes sent undulating tones through hills and valleys and over the river's broad expanse. John Lancaster, as drummer, and Miss Eleanor Turner, Jean Erlbacher and Helen Marie Wolfe, as buglers, announced as heralds of the sunrise, just as the sun was peeping up from the Illinois horizon. The massed choir led in the singing of the Easter hymn, Rev. W.J.. Gammon of the Presbyterian Church at Jackson giving the invocation. The choral reading of the scripture was given by the verse choir of Lorimier School, and the May Greene Boys' Choir sang "Glory in the Garden" and "Alas, and Did My Saviour Bleed."

Dr. H.H. McGinty, pastor of First Baptist Church, gave the offertory prayer and a trumpet trio, composed of Homer Gilbert, Leon Jones and Ben Rudert, played "The Holy City" as the offertory. Mrs. A.C. Van Puffelen of Fruitland sang "I Know That My Redeemer Liveth" and "Hosanna." She was accompanied by Miss Margaret Hope of Fruitland.

Rev. J. Wilson Crichlow, presiding elder of the Methodist Episcopal Church, South, delivering the Easter meditation, pointed out that it is not enough just to come to a beautiful place like Cape Rock at sunrise and worship the Lord, but "we must live the Resurrection, let the Resurrection be ours, to lift up our lives. We must live triumphant lives, we must walk in the light of His cross."

"It is not enough to say that we believe in the Resurrection. We must share His Resurrection, not when we die, but today, by walking with the risen Christ in the newness of life," he said. Pointing to the apostle Paul's great Resurrection chapter he quoted, "Wherefore, my beloved brethren, be ye steadfast, unmovable, always abounding in the work of the Lord, and for as much as ye know that your labor is not in vain in the Lord."

"This is a strange conclusion, and is an admonition to live the Resurrection life. We are called upon to live that same pure, strong, holy and unselfish life that we should rejoice to see reproduced in others by our influence," Rev. Crichlow said, and closed by asking that persons unsaved unite with some church and live their obligation as imposed by the Resurrection. The benediction was said by Rev. Paul R. Gaston, pastor of the Assembly of God Church.

The line of automobiles were routed north and around Cape Rock Drive by police, this method of handling the cars proving successful. The cars entered the park from the south only, permitting them to all move out in the same direction. Police were aided by Boy Scouts, the Girl Scouts distributing programs.