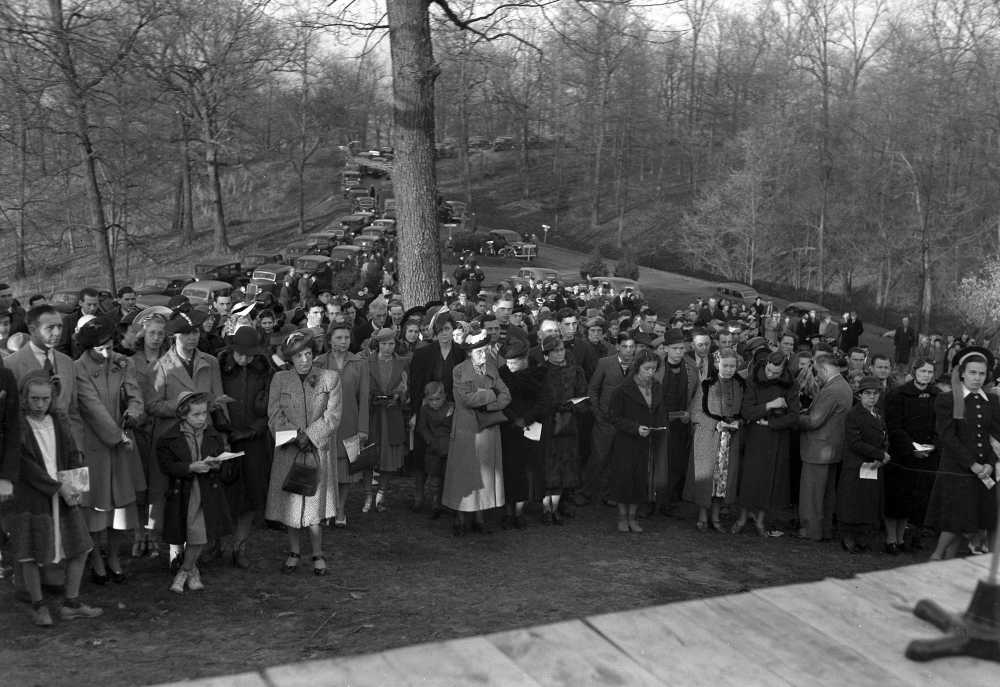 This picture shows a part of the crowd that attended the Easter Sunrise Service at Cape Rock, with a view of some of the motor cars that lined the drive leading to the scene, on April 9, 1939. (G.D. Fronabarger photo)

It was published the next day in the Southeast Missourian. Another photo was also used, a previous mystery photo, that we have now identified. It showed "a number of boys watching with awe the rising of the sun, which might indicate some of them at least were seeing something new."

Here is the link to this picture and the blog.

Easter Brings Out Many Worshipers

Easter Sunday drew crowds aggregating around 12,000 persons to special services in the churches and at the annual community Easter Sunrise Service at Cape Rock. Between 1200 and 1500 persons were at the service at Cape Rock, a slightly smaller crowd than last year, and in many churches record attendances were a feature of the day's events. About 75 members were received into the various churches.

Easter dawned clear, but rather cool and sunrise service worshipers wore heavy coats to keep them comfortable. The forenoon was cloudy and warm, but a high wind in the afternoon made it seem like a March day.

The setting at Cape Rock was all that it has been in former years, trumpeters heralding the sunrise and special hymns being sung by the May Greene School Boys' Choir and Girls' Glee Club, the scriptural recitation being given by the Washington School verse choir, and a solo "Open the Gates of the Temple," being sung by W.J. McBride.

Rev. Don E. Schooler, pastor of Centenary Methodist Church, delivering the sermon, declared that people today are facing two kinds of crosses: "The misery that comes to men because they refuse God, and, the suffering which comes from accepting God, which suffering, however, produces new life, which is the resurrection for men."

He called attention to the significance of the Easter occasion as being symbolic of the Resurrection, which is the hope of the world. The "Christian Church is not nervously trying to prevent the extinction of Christianity; it is in far wiser hands than ours. What you and I have to do is to keep in touch with it," he said.