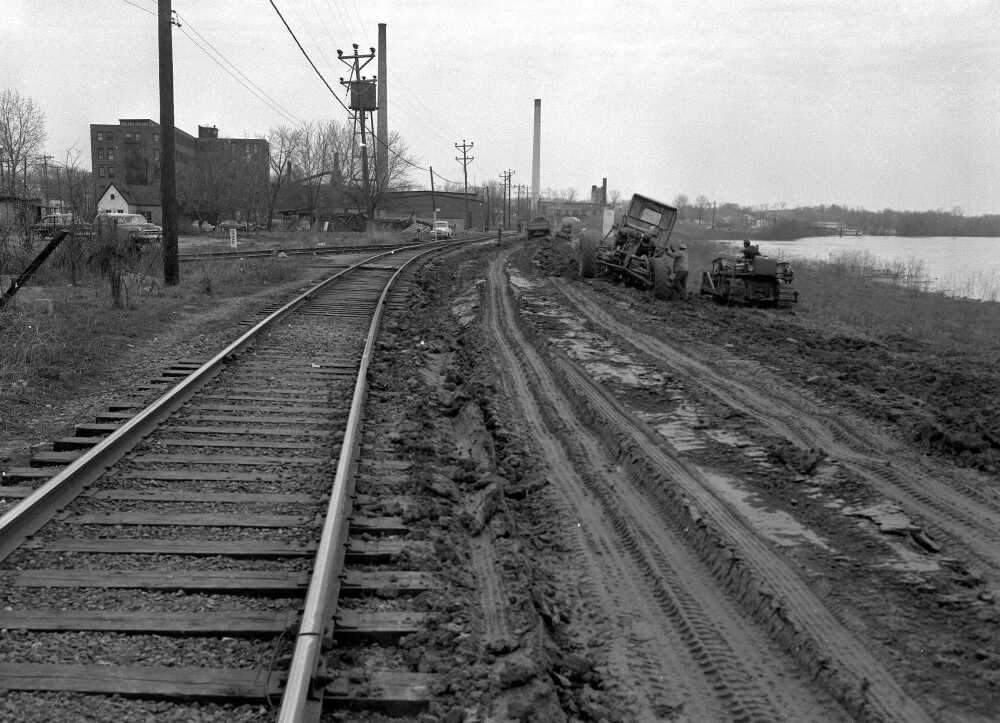 Building a temporary earth levee from the earth levee near the Cape Girardeau shoe factory southward to near the Cape Sand Co. This view is north from near the sand firm along the east side of the Frisco Railroad tracks. The levee was started Saturday afternoon by special order of the City Council and was virtually completed today. The structure is six feet high. (G.D. Fronabarger photo)

All available city equipment and trucks from other sources were thrown into a levee-construction project over the weekend in an all-out effort to save the International Shoe Co. plant from inundation by a Mississippi River flood now predicted to crest at 38 feet.

Crews worked until midnight Saturday on the earthen levee and returned at 6 a.m. Sunday for a full day's work. Business houses in the area provided sandwiches and coffee for the workers without charge.

The action came within 75 minutes of adjournment of an emergency City Council meeting Saturday with engineer, levee district and labor officials to map a concerted plan of action.

Saturday afternoon and Sunday hundreds of loads of earth were hauled from the North Main street borrow pit used for flood wall construction.

This was dumped to connect with the uncompleted Main street dirt levee immediately east of the shoe factory. It was brought southward several hundred yards to the south drive of the old Missouri Utilities Co., car-barn, now a maintenance shed.

The earth levee was built an average of five feet high and rests on a 14 to 16 foot base. This base was being drawn tighter to about 12 feet today. Damp earth caused it to spread as a bulldozer moved back and forth compacting it over the weekend.

The levee was built over the weekend to provide protection to 40 feet.