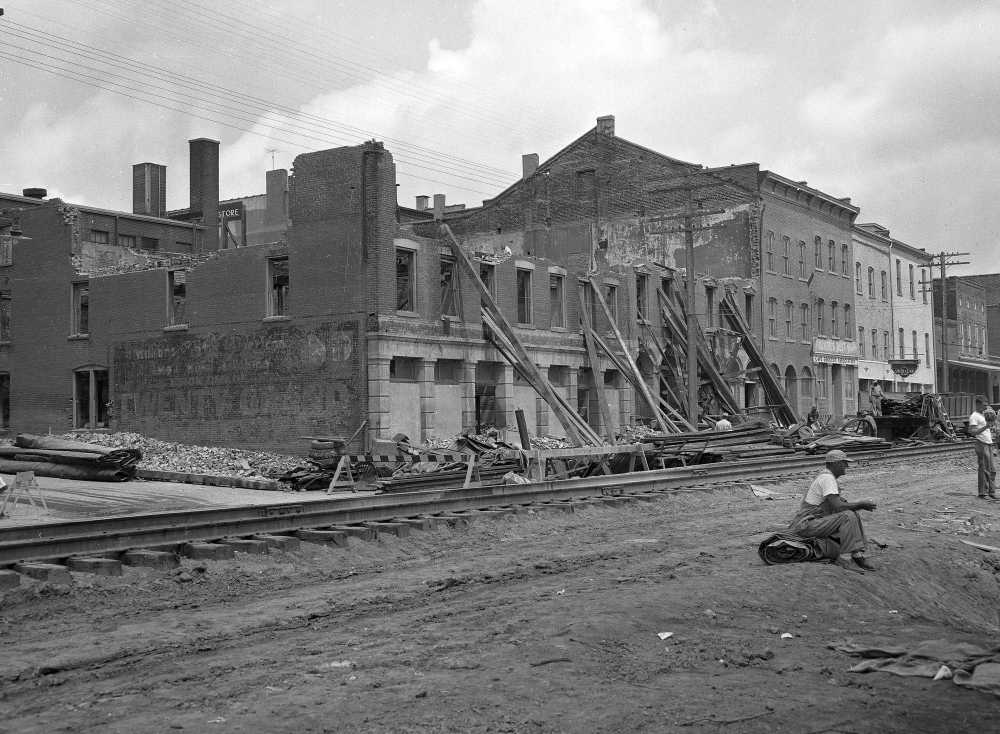 G.D. Fronabarger took this picture sometime after the old railroad tracks were removed along Water street in 1958 for construction of the floodwall. The new tracks shown were installed on the west side of the old tracks.

Click to see another photograph of the building used in Lost and Saved.

This is the text from Lost and Saved:

A three-story, ornate brick building once stood on Water Street in Cape Girardeau and housed the S. Albert Grocery Store, with the Albert Boat Store to its south on the northwest corner of Water and Themis streets. Built in the mid-1800s, the building featured an arcade of six arches on the first level façade with elaborate carved window hoods. Sebastian Albert, a wholesale grocer and commission merchant, purchased interest in his brother's wholesale grocery business around 1860, and the business became known as J. & S. Albert Wholesale Grocers. It continued to operate until 1877, when Sebastian Albert took over and renamed it S. Albert Wholesale Grocers. His business specialized in wholesale grocery, liquors and farm implements. Sebastian Albert was born in France and immigrated to the United States, settling first in Louisville, Ky. In 1846, he moved to Jackson and worked in the general merchandising. He joined the Gold Rush, traveling to California in 1850, but returned to Cape Girardeau three years later. In 1865, Albert married Rosa L. Miles of Cape Girardeau. He died in 1895. In May 1959, the grocery building and the one south of it were razed by Cape Federal Savings & Loan Association for a parking lot.

Wrecking of two massive brick buildings on the waterfront just north of Themis was started Monday. The old buildings are to be taken away so that Cape Federal Savings & Loan Association can prepare a parking lot.

R.W. Nichols who recently had owned the two buildings is general contractor for removing of the structures. He sub-let the actual work to Henry Warfield.

The one at the street corner is the former Albert Boat Store, a landmark in the community in the days of the Mississippi River packets, and the next one is the former Yellow Dog building. Farther north is the former Cape Grocer Association structure.

The roofing and some of the framework are to be removed first, then the workmen can start taking away the thick brick walls. The walls, save for some marks made by the passing years, are in pretty good condition. The Cape Federal offices are immediately to the west of the old buildings, at 102 North Main.

The site is now a parking lot across from Port Cape Girardeau restaurant.

Beverly Hahs writes about the Alberts in this column from October 3, 2020:

The Alberts: immigrants from France