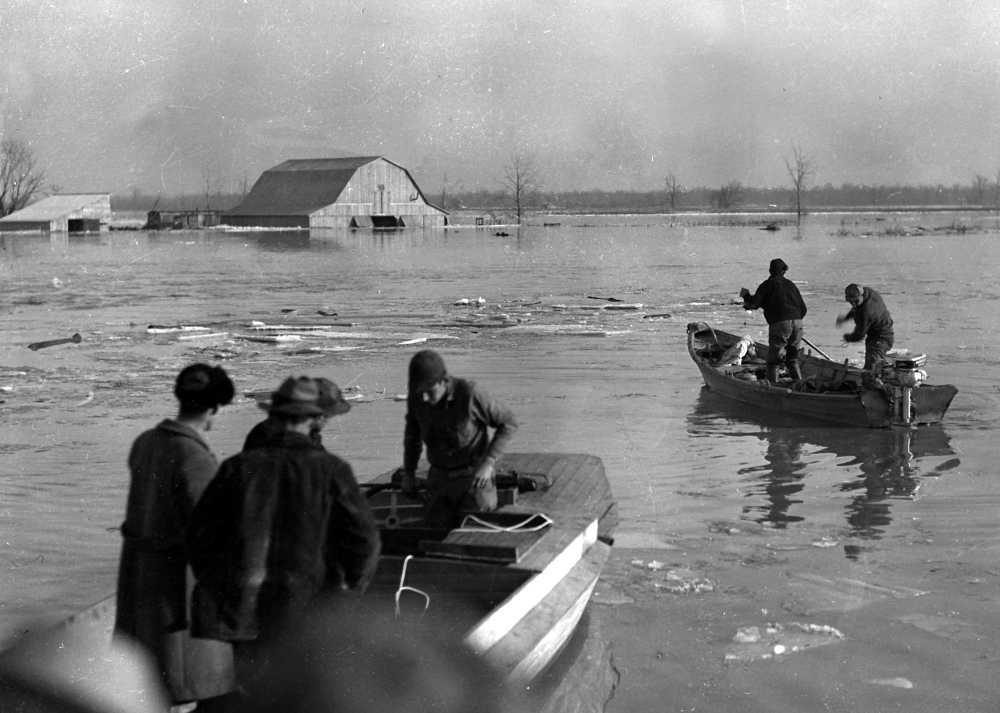 Boat crews depart for a search of the Bird's Point-New Madrid floodway area near Anniston, Mo. for people marooned by the high water. (G.D. Fronabarger photo)

Anniston, Jan. 28--A feverish and anxious search went forward today over miles of watery waste in the section of the Mississippi River floodway near here for marooned refugees, who have not been rescued from the spillway, and most of whom refused to believe the seriousness of the gigantic flood.

At least 100 of them are believed marooned in the desolate area which a few days back was a prosperous farming district. But as the flood moved south after entering the spillway, two lives were taken in the Wyatt sector Wednesday, the first officially reported, and the water closed in on the vicinity of the road which leads from Anniston to Wolf Island.

Scores of boats of all kinds were commandeered Wednesday when the search was renewed and more than 100 were removed from inundated buildings. Today the Missouri Game and Fish Department, augmented by the Red Cross, Highway Patrol, Highway Department and dozens of owners of private boats were searching over the floodway in this vicinity for refugees who have been forced into the second stories or on top of the roofs of their homes and other farm buildings.

One group of 50 persons, crowded into a small dwelling, was rescued Wednesday by a patrol of boats. The party had gone to a dwelling which was on a knoll some higher than the surrounding ground and while there the water came up into the first floor of the structure. Boats got to them before there was any great amount of discomfort. Late Wednesday afternoon one boat went out into the flood to rescue a family. It was said the farmer had refused to leave the spillway, not believing the flood to be as serious as was said, and he did not heed the warning.

"Go out and get that man, his wife and children. If he doesn't want to come, bring him anyhow. I hope he has learned his lesson by now and will pay attention to warnings in time of flood," a director of the rescue work said to operators of a motorboat as they left.