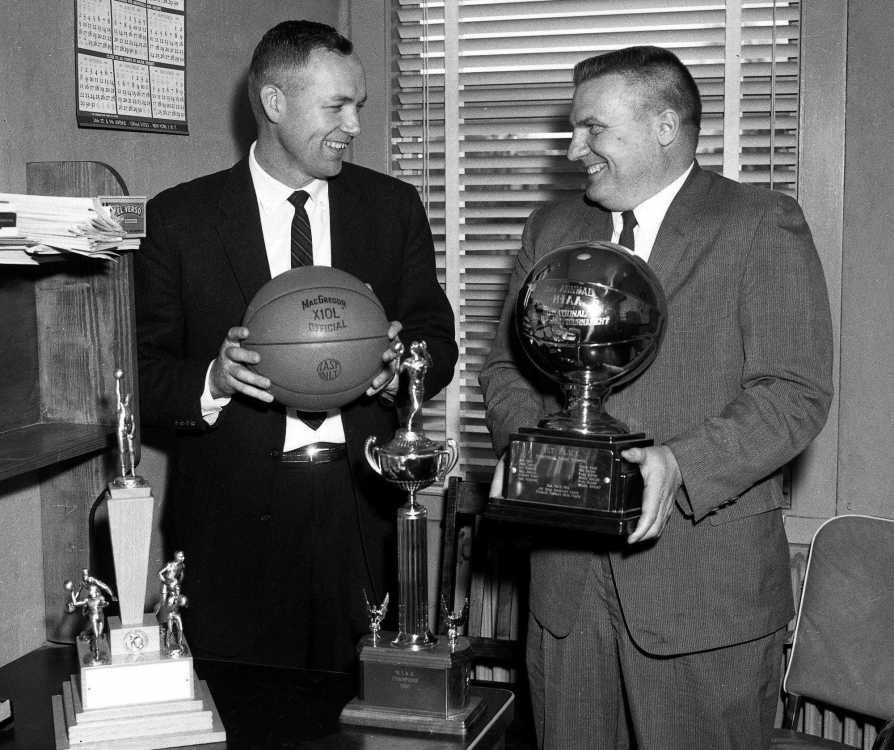 Trophy-winning is old hat to these two knights of hardwood court, but their smiles show their particular pleasure in those before them. Coach Charles Parsley, left, of State College holds the basketball used in the N.C.A.A. regional game Saturday night, while Assistant Coach Joe Uhls weight-lifts the silver basketball denoting the championship of the M.I.A.A. holiday tournament. In front of Parsley are the N.C.A.A. regional trophy, left, and the M.I.A.A. championship award.

Business of Winning Nothing New To State College Coach

Lips and eyes lighted in simultaneous smiles and the soft voice, hesitating only a second after the question, declared, "The only thing to top it would be to win at Evansville."

The speaker with the smile and neat dark suit was Charles Parsley, who had had some time to reflect and savor the victory that had come the way of his hard-nosed State College basketball team on Saturday night.

This business of winning is nothing new to the 33-year-old roundball wizard, but the way his team goes about it is a cause for head-shaking wonder.

"They play just hard enough to win," said Coach Parsley, as if he could hardly believe it possible for a team to face the Perils of Pauline so frequently and still come out on top at the end of each chapter.

"We would have won at Kirksville," he said ruefully, "but they broke on top and we slowed down. We've been very fortunate in having someone to pick us up when we needed it."

The propensity of his club for close contests, coach Parsley continued, is a characteristic of the squad.

"We jump out on top," he said, replaying mentally a dozen or more games this season, "then we relax until they come on top. Then we catch up with them."

Assistant Coach Joe Uhls, who was occupying the other chair in the coach's office, shook his head in agreement.

Then it was that Coach Parsley took a question about the thrills he had received in basketball, wooled it around briefly with thoughts of great teams of other years, and declared, "This was about as big a thrill as I've had in basketball, and I've had a lot of thrills -- the sport has been real good to me -- but this was one of the tops as far as I'm concerned.

When Charles Parsley starts discussing basketball thrills, he can pull them out like a three-year-old in a toy box.

He didn't even wait until he was in high school to start. At the consolidated school at Hazel Green, Ky., if you were good enough as an eighth grader to make the high school team, you played. Charlie was good enough.

So were his two brothers, Everett, a senior, and Ray, a freshman. The Parsley trio led Hazel Green through the season and playoffs to a state championship in a single class tournament.

That initial thrill was followed by four years of play at East Bernstedt, Ky., where young Charles and his family moved. There he played under the coaching of two other brothers -- this is a basketball family, you see -- J.B. for three years and Darrell in his senior year. Sister Hazel stayed out of the act.

At East Bernstedt, the team lost in regional finals two years, but was in state competition (no winner) the other two.

This was followed by 18 months service in the Army Air Force, partly in the European Theater, in a B-24 outfit.

The lure of an education and more basketball was great, and Lt. Parsley donned mufti and enrolled at Western Kentucky. There he played four years of basketball under Mr. Diddle, the famed Hilltopper coach.

Parsley received tribute of his teammates when he was elected captain of the team at the end of his freshman year. At Western Kentucky the team won the Ohio Valley Conference title each year and in three of the four participated in the National Invitation Tournament in Madison Square Garden. No championships, but a third place one year.

Parsley was drafted by Fort Wayne Pistons of the National Basketball Association, played a half year with them, then was traded to the Philadelphia Warriors. There he spent 1 1/2 years as the sixth man, the top reserve guard, and could have had a longer span of pro life, but the lure of coaching drew him away from the play-for-pay ranks.

His first job was at Holstein, Neb. In two of his four years there, Holstein won the Class D state championship, going undefeated in 56 consecutive games his last two years. He left there with a 95-4 record.

Next came a one-year tenure at Cody, Wyo., where his team won the Class A state championship and had a 23-7 record. Here he was named Wyoming Coach of the Year by the state's sports writers.

Nebraska called him back the following year, this time to North Platte. He again took his team to the state tournament, but lost in the semifinals. The record was 13-5.

Six years of coaching had brought him the phenomenal record of 131 victories against only 16 defeats when he heeded the call of State College and came here to start the 1958-1959 season. His three years here have culminated in another championship team and a shot at a national title. The record, to date is 11-9 the first year, 13-9 the second and 23-2 so far this year.

This gives him a lifetime coaching record of 178 victories and 38 defeats.

Much of the credit for this year's successful team must also go to Assistant Coach Joe Uhls. The former West Frankfort, Ill., high school star has been a prime mover in conditioning the team and in working individual squad members.

He has been with the college since he entered as a student in 1940, playing as a freshman on the basketball team before being called to three years Air Force Duty in Europe. He returned for two more years of play, and in 1949 was named supervisor of social studies and physical education at Campus School.

There he coached basketball for 10 years, in seven of those moving into regional and sub-regional play, and twice winning the city championship. In addition to his current basketball duties, he is coach of the college baseball team.