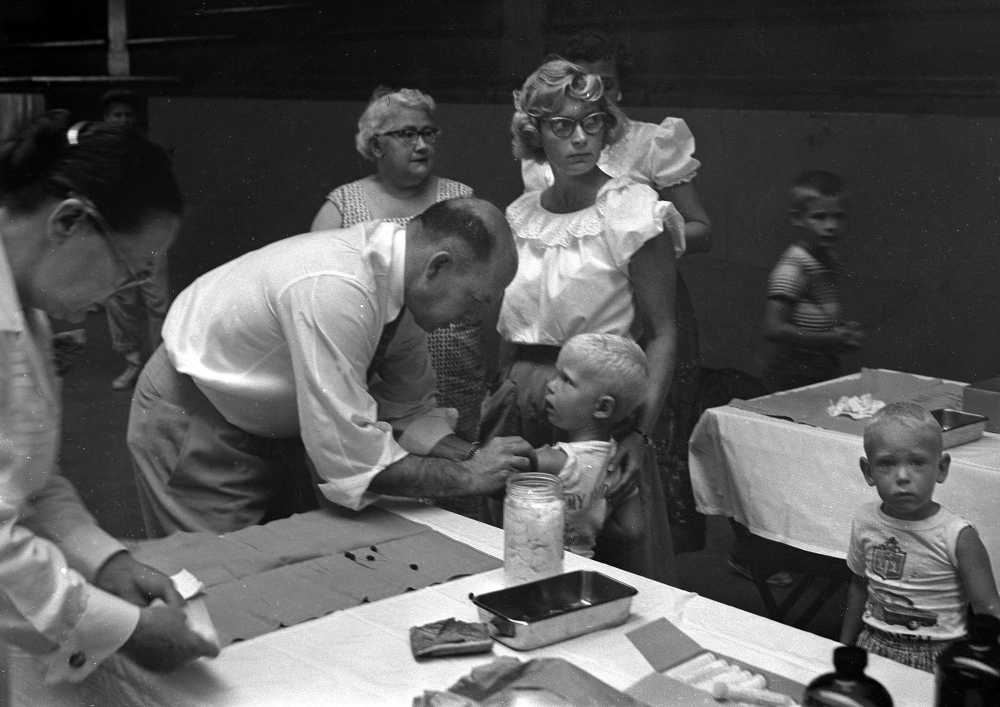 Participant interest. Blake, 3, really gave all his attention to the physician as he received his smallpox vaccine Saturday at the Arena. His mother, Mrs. Charles Vallmeyer, watches her son's reaction. The family resides at 1068 Patricia street. (G.D. Fronabarger photo)

Almost a sixth of the population of Cape Girardeau--4091 persons on an official count, plus others--turned out Saturday at the Arena Building to receive smallpox vaccinations in a joint preventative move by the Cape County Medical Society and the Missouri Division of Health.

Those who worked at the project Saturday said the exact count came from cards which were given each person, child or adult, as they moved into the vaccination line. Many, they said, failed to turn in the cards, so the number is somewhat greater than the recorded figure.

In the afternoon the lengthy line of persons waiting for vaccinations thinned out. There was never a time, however, when there was a lag and the doctors giving the vaccinations had no subjects. The program continued until after 4 o'clock.

Leslie Miller of the district health office staff at Poplar Bluff arrived at 12:30 o'clock Saturday afternoon with an additional supply of vaccine to replenish the reserves which by then had become low. The vaccine was provided by the state.

Dr. E.A. Belden, director of the Department of Communicable Diseases of the Division of Health, praised the work of the medical society, the registered nurses, parent-teacher members and the Newcomers Club in handling the vaccination program.

"This was a wonderful demonstration of community service," he said. "It could not have been put on so expeditiously and efficiently without the cooperation of these people."

Dr. Belden gave this advice to those who were vaccinated. "The vaccination area should be kept clean. Dressings or shields are not necessary and may cause irritation if left on too long. Scratching should be avoided when the vaccination begins to itch."