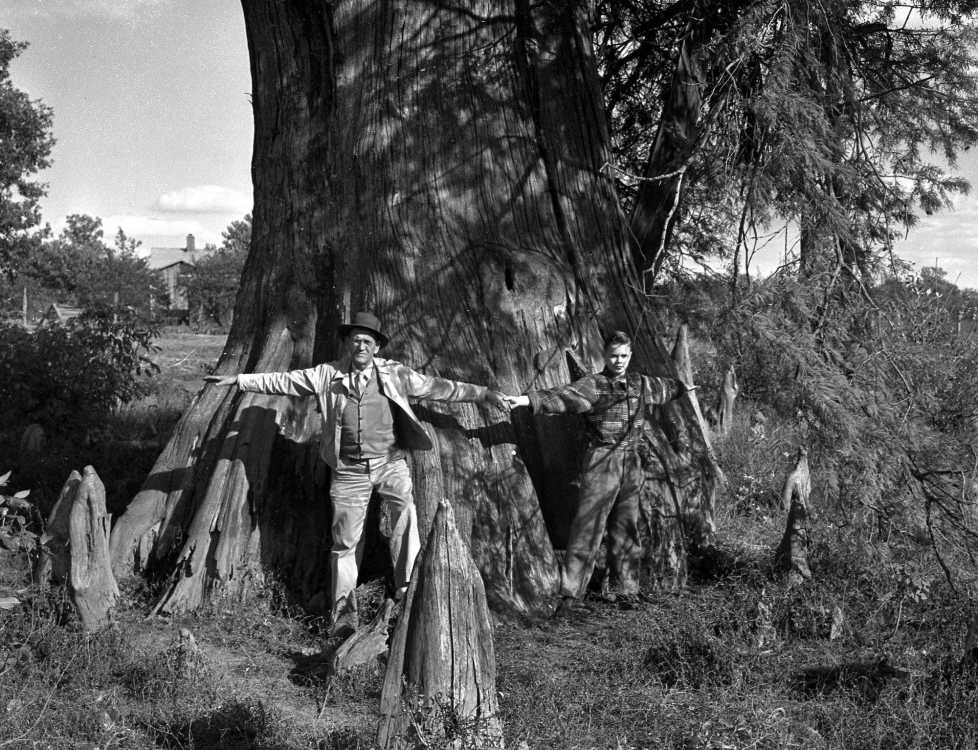 We found this previous mystery photo taken by G.D. Fronabarger was published Nov. 2, 1946 in the Southeast Missourian. Here is the story:

The largest tree in Missouri is the Cypress shown in the above picture, lumbermen say. It stands in a field a few miles from Vanduser in Scott County, and is in a fine state of health.

In order to do justice to this unusual cypress, two photos have been used, (click this link to see the microfilm image) one showing the entire tree and the other the dimensions of the giant close to the ground. This view also shows the "knees" close by, there being many within 25 or 50 feet.

The largest Oak tree in the state is in Mississippi County, not far from East Prairie, and in order to save it from the sawmill a few years ago, a state park was created and the great tree is the attraction in Big Oak Tree Park, a domain of 1006 acres.

The big Cypress is a much larger tree, woodsmen say, because cypress grows to much larger proportions than oak. The Big Oak is an extraordinarily large tree of its kind, and its supremacy as an oak tree has never been questioned.

The magnificent cypress shown herewith is 29 feet 7 inches in circumference six feet above the ground and at the base, which is shown in a separate picture to impress its unusual size, it is 47 feet in circumference. The tree is estimated to be 120 feet tall. Tree authorities have said that it is probably more than 1500 years old, certainly more than a thousand years.

May Also Be Oldest Tree in the State

The Big Oak Tree is 23 feet 5 inches in circumference three feet above the ground and is 128 feet 10 inches tall. Its age is estimated by tree experts at 380 to 400 years.

If the cypress shown herewith is the largest tree in Missouri, it should be honored by the State as was the Big Oak Tree. The Big Oak may not reach a much greater longevity and if it does not it will disappear. This is the nature of oaks, books say.

But the Big Cypress may be just a young tree, as Cypress age is figured. If it should be 1000 or 1500 years of age now, as some tree authorities have said, it may go on to equal the longevity records of the great Redwoods in California, which are said to be older than biblical history, or the great Tree of Tule, in Mexico, which is the oldest living plant on the earth, according to Mexican history. These great trees are of the cypress family. Naturalists from the beginning have written that cypress is the wood eternal.

The tree shown here is a marsh or swamp cypress. It is native to the United States and Mexico and grows best in wet or damp conditions. However, when grown as an evergreen for ornamental purposes it is popular in parks and other public places, and some fine specimens are to be seen in the "Ten-Mile Garden" that extends from Cape Girardeau to Jackson.

Surrounding the giant tree the picture shows a number of "knees" which are usually a part of cypress trees when they grow in water or damp soil. These "knees" are said to enable the trees to carry on their "breathing" processes.

Prior to 1900 when this section of the state was about as well known as "swampeast" Missouri as southeast Missouri, the lower counties were covered with virgin timber. Perhaps 75 per cent of it was Cypress. On the highlands Oak grew in abundance, the finest to be found anywhere. Many other varieties, such as Elm, Maple, Beech, Poplar, Sycamore, Pine, were also abundant. Then came drainage and as the land was cleared for agriculture the timber disappeared. Very little commercial timber remains today, and a woodsman remarked that seldom is a Cypress seen at a sawmill.

Now that the legislature has provided a definite and progressive state parks program, it might be possible to have the great tree shown here preserved for the benefit not only of the present generation but for the centuries to follow.

Here's an opportunity for service organizations of Scott County to show their interest in the future.

In its March 13, 1975 edition, The Southeast Missourian reported the tree's demise.

Here is a picture which this writer took in 1975 after the following story was published.

The cypress tree, located five miles east of Bell City in a drainage ditch on the property of John Dennis of Benton, stood 99 feet tall, 33 feet in circumference and 11.1 feet in diameter.

The estimated age was 550 years old, which dates before Columbus's discovery of the North American continent.

The cypress was close to the redwood caliber, said Mr. Wylie. "It was a remnant of the virgin forest that once covered the southeast Missouri area," said Mr. Wylie.

The tree was located during the 1967-68 "Big Tree Contest" sponsored by the Missourian in cooperation with the state conservation service, to locate champion trees of all species.

No other cypress tree in the state could come close to measuring up to the statistics of this tree, said Wylie. The next closest tree on record is 23 feet in circumference.

It was noted in a story March 24, 1975 that the tree was the second largest bald cypress in the country, behind a Tennessee monster that measured 39 feet 8 inches in circumference. Also the tree was a tiny sapling when Joan of Arc was burned at the stake in 1431.

According to the Missouri Department of Conservation, the oldest bald cypress trees in Missouri can be found at Allred Lake Natural Area near Neelyville, where the trees range from 500 to 1000 years old. This is the last stand of old-growth bald cypress in the state.