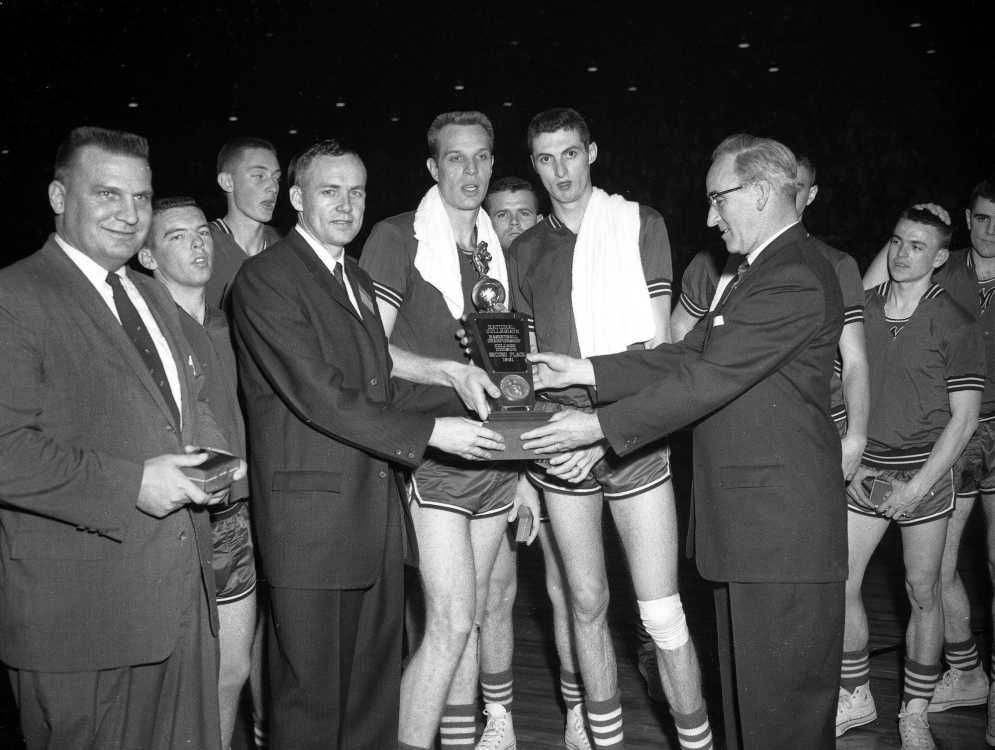 They found a new depressed area in Evansville Saturday night. It was in the west stands of Roberts Municipal Stadium.

There stood, abjectly, almost 2000 stunned Cape Girardeau basketball fanatics, still not believing what they had seen or what their eyes told them.

There it was in red lights, defying belief. The Indians, who had averaged 79 points per game through the season, had been held to a minuscule 38 points!

Wittenberg had forced the Indians to its type of slow, deliberate, percentage basketball, and by doing so won the college division championship of the National Collegiate Athletic Association.

A national title, so near, yet so far, had slipped from the grasp of this tremendous squad of Southeast State athletes. Yet they left the floor heads high, for they had played their hearts out and left no apologies behind for the reputation they established in the Hoosier city on the banks of the Ohio River.

And since when is it not cause for pride and satisfaction and warm congratulations when you rank second in the nation from among hundreds of basketball teams?

There were none among the State College hundreds who had watched the Braves play through the season who felt they played one of their better games. They hadn't. But neither had they come up against a percentage team with the finesse or the determination to avoid error that were drilled into this Springfield, Ohio, club.

The defensive pressure applied on the Indians was unbelievable. Officiating in this tournament allowed this, and contact was frequent. Consequently, guarding was at extremely close quarters. There were times when the Indians had shot opportunities, but generally the defense was so tight shots had to be hurried.

This was particularly true along the base lines, and Carl Ritter, the Indians' bread-and-butter guard, had to rush his trademarked two-hand jump shot. Wittenberg's guards met Ritter and tiny Vivan Reed out front, too, and they couldn't get clear shots overhead. At the same time the Tiger forwards and center were keeping a tight clump underneath. Shots there were few. Ritter scored only six points. Reed three.

No record was kept of time each team controlled the ball, but a good estimate was that Wittenberg had it 65 to 70 per cent of the time, passing, cutting, trying for the sure shot. Nevertheless, Cape outshot the Tigers, 36.6 per cent to 28.8 but they had relatively few chances to shoot. Both teams had 15 field goals, so the difference was free throws.

A big part of the game story is told in rebounds. The Indians, who have consistently out-played opponents on the boards, were out-rebounded, 33 to 31. This inability to grab the ball, particularly for a second shot off their own goal, hurt.

With Ritter and Reed not hitting from outside, Ron Gray came through from underneath. He hit six for nine, a hot .667. Bill Giessing had an identical percentage on two of three, but as is evident, neither could get off the number of shots they normally do. Big Les Hemmer, the Indians' fine rebounder, again was plucking them off. He had 11, second high in the game. Dawson Pikey, the Indians' invaluable sixth man, spelled Giessing.

Another factor was inability of the tall Semo State team to contain Al Thrasher, 6-2 Tiger forward. He hit six field goals and led in rebounding with 12. It was his play that made the difference for Wittenberg.

The Indians jumped into an early six-point lead on goals by Gray, Hemmer and Giessing. They held the advantage for four minutes until the Tigers hit seven straight points to go into a 7-6 lead. Three times in the half, 12-7, 15-10 and 17-12, Cape had five-point leads. But after the last score they went five minutes without the ghost of a goal. Wittenberg scored seven for a 20-17 lead. At half time it was Tigers 24, Indians 22.

Seven minutes of the second half had been played before Cape took a brief 30-29 lead. With 9:10 left to play they had a three-point lead, and the outlook was good. Then Cape played 4:10 without a score. Wittenberg cashed seven and blew the game wide open. In the last nine minutes 10 seconds the Indians scored only three points.

In all, the score was tied three times and changed hands seven.

The Indians received a smart new trophy to add to this year's collection and each player received a 23-jewel Lord Elgin wrist watch.

Wittenberg succeeds Evansville, winner the past two years, as college division N.C.A.A. champions. The 42-38 score was the closest lowest scoring championship game in the five-year history of the tourney.

Appearance of the Indians in the championship game was the second in three years for a M.I.A.A. team. Springfield lost to Evansville, 83 to 67, in 1959.

The Indians ended the season with a 25-3 record, the best in college annals. A 17-game winning string in the period was also a college record. And another was set by Ritter, who broke the four-year career M.I.A.A. scoring mark of 1406 points held by Gene Rubel of Springfield. Ritter, with a full season of play remaining, has a career total of 1473.

The State College Indians may have had to settle for second place in the N.C.A.A. college division finals Saturday night, but they were in first as far as all-star players were concerned.

Both Carl Ritter and Vivan Reed, the spark plug guards on this great Indian team, won first place positions on the all-tournament team. Call them All-Americans if you like, for these were the true survivors of the grueling basketball campaign, nationwide.