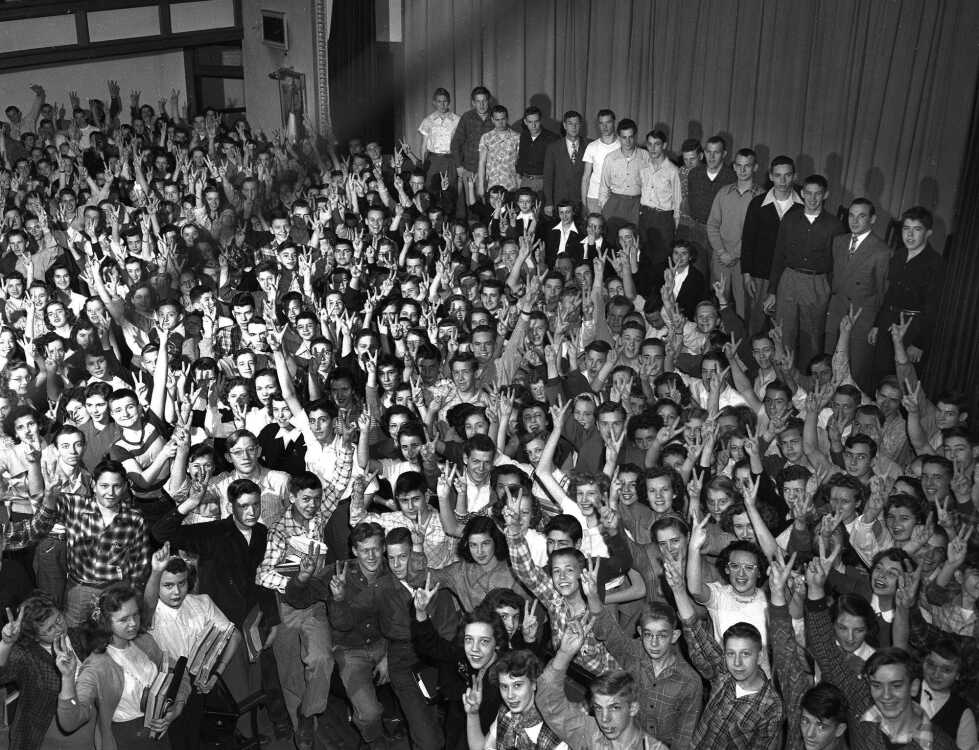 Frony loved to take crowd photos especially at enthusiastic gatherings such as this one.

Central High School pupils, crowding into the school's auditorium at the opening of the school today, gave the district regional champion Tigers basketball team a rousing ovation. The rampaging Tigers, who defeated Bonne Terre Saturday night at the Arena for the regional championship, were called to the stage and each member of the team had to give a short talk while cheering schoolmates engaged in a 45-minute noisy demonstration. Principal R.L. Sheets, directing the special assembly before classes started, presented the basketball team. Coach Lou Muegge said his team played the kind of basketball that should go far in the state tourney. His assistant, Coach Robert Beard, also gave a talk and urged the Tigers to come back home with the state trophy. Cheerleaders interspersed the program with school yells -- and pupils needed no encouragement to participate. Supt. of Schools L. J. Schultz paid tribute to the fine sportsmanship of the team and fans and reported he had received several fine comments on the manner in which the fans conducted themselves during the regional tournament. The above photo, made during the assembly, shows pupils giving the victory sign to the team, which with the coaches is on the stage. The pupils jammed the small auditorium, pacing in front of the stage like sardines as they "whooped it up" for the Tigers.