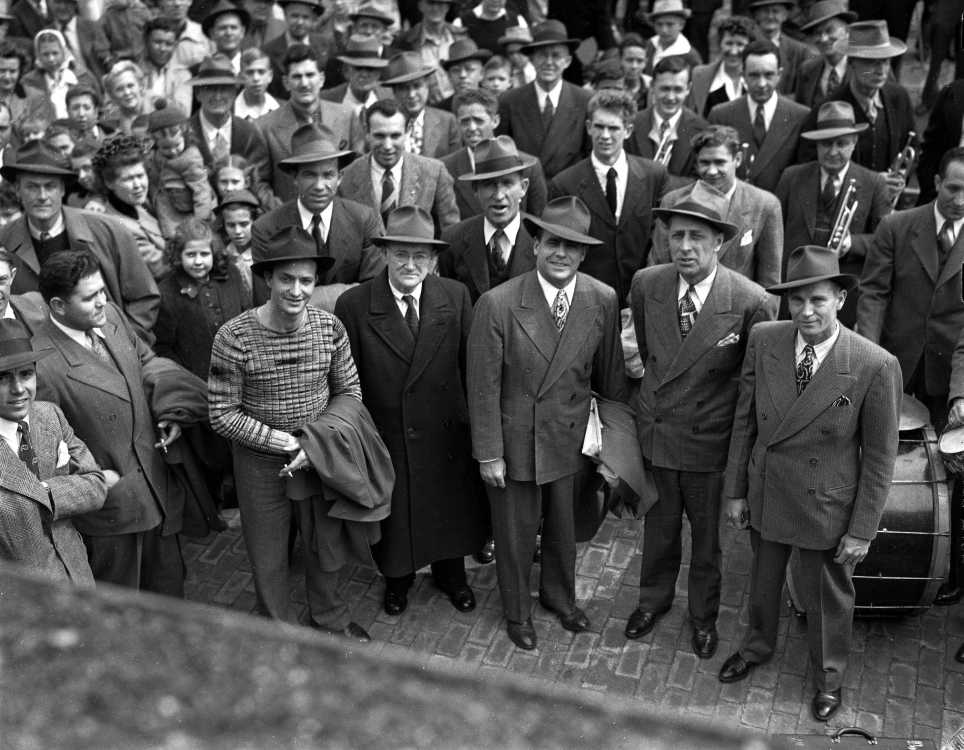 G.D. Fronabarger took this picture March 11, 1945 of Cape Girardeau welcoming an early contingent of the St. Louis Browns and the Toledo Mud Hens at the Frisco railway station. Browns manager Luke Sewell is standing in the center of the front five men.

Manager Luke Sewell of the American League champion St. Louis Browns could put a baseball team on the field today, in numbers, but not in position, following arrival of nine players Sunday for the opening of the 1945 spring training season's initial workouts today. The champs' understudies, the second-place Toledo Mud Hens of the American Association, fared considerably better and today boasted 23 players, 20 of whom arrived Sunday.

Cape Girardeau, where the baseball fever is mounting higher with each season, gave the two teams a noisy welcome at noon Sunday when a crowd of between 1000 and 1500 fans jammed the areaway at the Frisco passenger station. On the train were Manager Sewell, now the circuit's managerial wizard, Pitchers Al Hollingsworth, Newman "Tex" Shirley, and Earl Jones, Infielder Len Schulte, up from Toledo, and Leslie Arnold, a recruit catcher from Peoria, Ill.

A Band on Hand

Manager Sewell, never one to be over-optimistic and hardly a ranking pessimist, in commenting on the coming season, just said: "I can't tell you a thing about it. We'll just be in there trying to repeat our 1944 performance. With the war and all, baseball is just another thing that has to be worked out, but we're in just as good a position as the others."

Back from a recent trip through the China-India-Burma theater of operations with a USO troupe, Manager Luke saw what the world series and baseball talks did for the morale of the men on the fighting fronts, and he's determined to go ahead.

Today the players on both clubs were summoned to Houck Field House at 10:30 a.m. for the first practice session. This was to include calisthenics and instructions, with the added probability of track work in the stadium. The Arena dirt floor will not be in shape before Wednesday, it was said, for indoor work.

The weather for the opening of the 1945 spring training camp was ideal--warm and with a touch of spring in the air. That was quite in contrast to the weather just 10 days later a year ago when the clubs on March 20 were met with a driving sleet and storm on their arrival.

Here is an earlier blog about a Browns and Mud Hens baseball game played in Cape Girardeau.