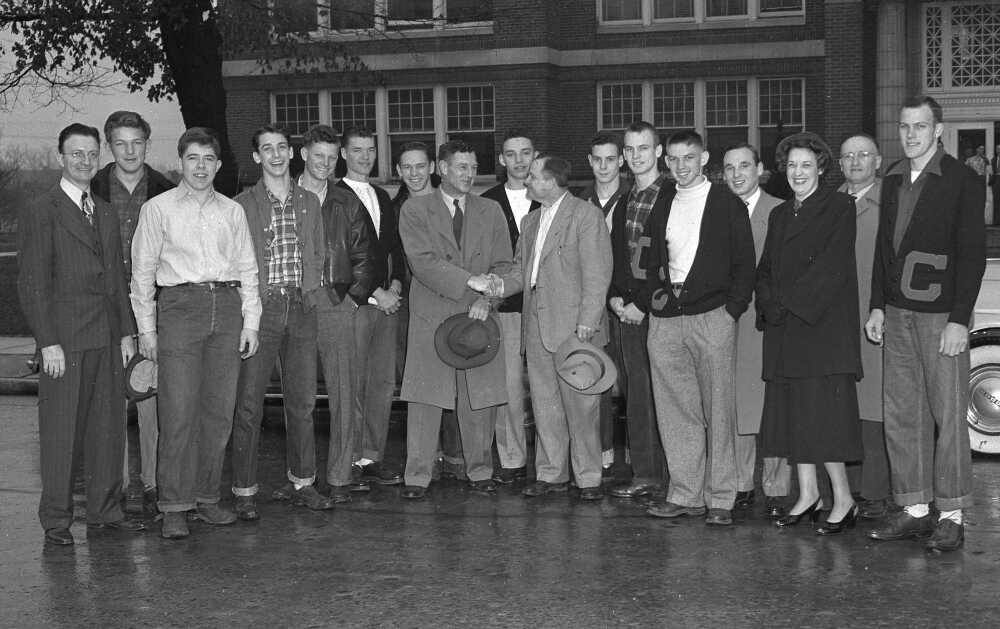 SPRINGFIELD, March 11 -- In a slam-bang battle that bordered on the rough side but was furiously fought from the starting whistle, the Central High School Tigers of Cape Girardeau were dropped out of the state basketball tournament here last night by the 33-game winner, Bowling Green High, which most observers in these parts figure will go on to win the Missouri title.

Bowling Green won the ball game 52 to 45, but they knew they had been in one, for the southeast Missouri champion Bengals were in the fracas all the way. The Bulldogs, who sported the same crew they had in the state tournament last year, were odds on favorites to win because of this.

Indicative of the spirited play was the fact that there were 49 personal fouls called, and four players ejected from the game for having five fouls each. Each team lost two, Rich Ryan for the Tigers going out in the second period and Bill Engleman in the final half, and center Russell and forward Watkins being banished for the Bulldogs.

Bowling Green started as if it would make the game a complete shambles as far as the Tigers were concerned, but the Bengals rallied, caught the Greenies and actually led them at one time, but couldn't stand the prosperity.

The game saw Bowling Green run up an 11 to 6 lead at the first quarter and 27 to 23 at the half. Bowling Green had the lead in the first half until less than four minutes had been played in the second quarter when the Tigers tied the score at 15 to 15. The Tigers went into the lead for the first time, 17 to 15, with four minutes played and from then on it was a nip and tuck battle.

In the last half the Tigers were behind 32 to 28 with less than three minutes to go, but that was as near as they came to Bowling Green who began to slowly widen the margin.

Bowling Green made 16 out of 26 free tosses and Cape Central 13 of 23 tries. Central was erratic in shooting all during the game.

Central Coach Lou Muegge received telegrams from 25 Girardeans expressing hope for a Tiger victory over Bowling Green. He read each to the Tigers before they took the court. Among those to send the telegrams were Maurice Dunklin and Rush H. Limbaugh Jr.

Buffalo beat John Burroughs and went on the win the state championship.