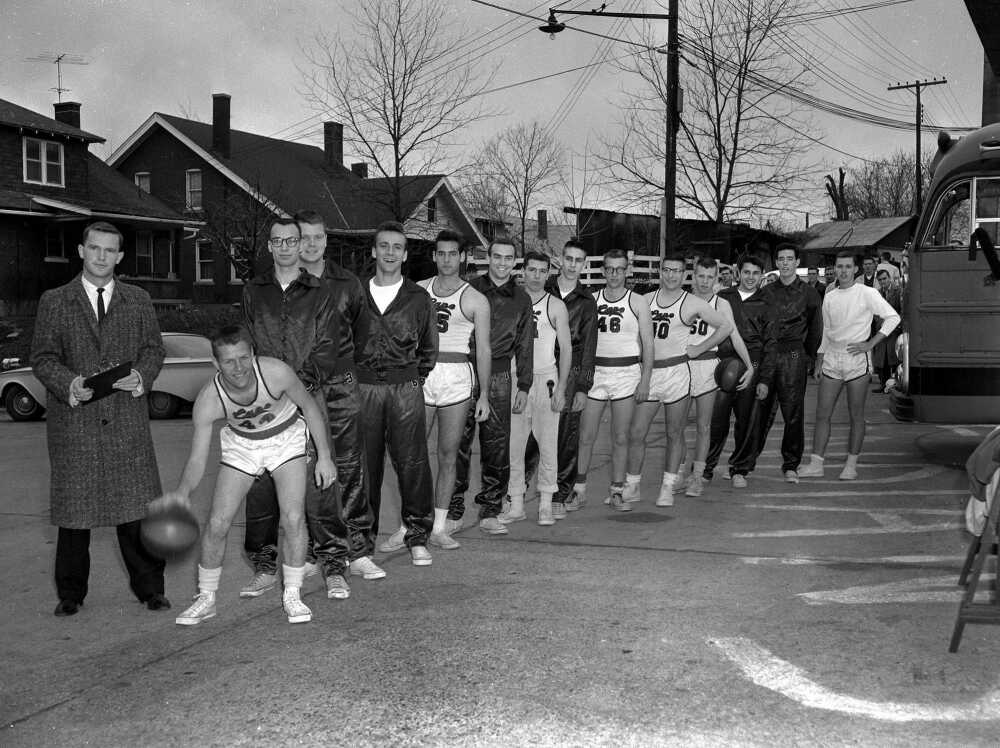 The picture was taken outside Houck Field House. Notice the buildings in the background where there is now a university parking lot.

Giving a modern touch to the ancient version of the Olympic torch bearers, 15 State College students started today to dribble a basketball all the way to Evansville, Ind., the site of the national basketball tournament in which the college team will compete.

They will dribble in shifts, with each man to handle the basketball for a mile. There will be five men to each of three cars, with each car spaced at 5-mile intervals.

The plan is to reach Evansville in time for the first Thursday night game at 7. Actually they could arrive earlier; if so, there will be a delay arranged so a grand entry can be made.

If a 4-mile an hour pace is maintained the 140 miles to Evansville should take 35 hours, which would put the dribblers in Evansville early Thursday night. They intend traveling all night and through the rain. However, there could be other delays, according to Rudy Gardner, a student from Washington, Mo., who thought up the stunt. Red-striped basketballs from the college lockers will be utilized, said Gardner, and the men will be in basketball togs and sweat suits.

Illustrative of the way Operation Dribble was to work as the start was made this forenoon, one car with five lads aboard was dispatched to a point 10 miles away on Illinois Highway 3 south of Ware. Another was sent to a point on Highway 3 exactly 5 miles from the starting point. The starting car had four riders and the dribbler.

Highways 3 and 146 will be followed to Vienna, Highway 45 to Harrisburg with the Ohio River crossing at Shawneetown. In Kentucky it will be Highway 56 to Morganfield and Interstate 60 and 641 to Henderson and Evansville.

Police escorted the dribblers to the Mississippi River bridge at the east end of which they were taken in tow by an Illinois police escort for the trip to the Kentucky line, where similar police help was expected.

Jim Piatchek initiated the dribbling routine when the start was made at Houck Field House and was relieved at the bridge by Steve Meier.

On the highway, the car, assigned to carry the dribblers next on call led the caravan, with the dribbler himself next and the Illinois State Police, in a patrol car with the warning light flashing, bringing up the rear.

Besides Gardner, who did not accompany the squad, others on the dribbling marathon are: Stephen Meier of Patton, second in command, Kenneth Dyson of Washington, Roger Taylor of Mehlville, Mike Conroy of Pattonville, Arlie Reinwald of Defiance, Mike Corley of Eureka, Mike Howenstein of Cape, Gil Baumker of Washington, Frank Gilder of Washington, Walt Dahl of Hillsboro, Bill Mahar of Lemay, Jim Piatchek of Mehlville, Paul Delanty of Kirkwood, Bob McGrane of St. Louis, Dave Seymour of Chester, Ill.

EVANSVILLE, Ind. -- It didn't take long for fans at the Cape Girardeau-Chicago U. game in Evansville's big public school field house Thursday night to know that the Southeast Missouri State College was in the N.C.A.A. playoff. The 15-man student crew that dribbled its way all the 140 miles from Cape Girardeau made a grand entrance to present a much worn basketball to Coach Charles Parsley as the crowd roared. The Pep Band was on hand, there was a whole flock of cheerleaders, and even ordinary fans who came by car and plane didn't secrete themselves in the dark places.

Southeast Missouri's Carl Ritter and Vivan Reed were selected for the all-tournament team.

The Indians ended the season with a 25-3 record. Ritter broke the four-year career M.I.A.A. scoring mark of 1406 points held by Gene Rubel of Springfield, Mo. Ritter had a career total of 1473 with a full season of play remaining.

The next year Ritter, from Advance, Mo., would end his career with a school and Missouri Intercollegiate Athletic Association record of 1,916 points in 91 games for a career average of 21 points.

Seeking to boost school spirit, State College students will again dribble a basketball to Evansville, Ind., where the Indians will participate in the NCAA National Tournament Wednesday; 13 members of the Sigma Tau Gamma Fraternity will take part in the stunt, also performed in the school's two previous appearances at Evansville in 1961 and 1962.