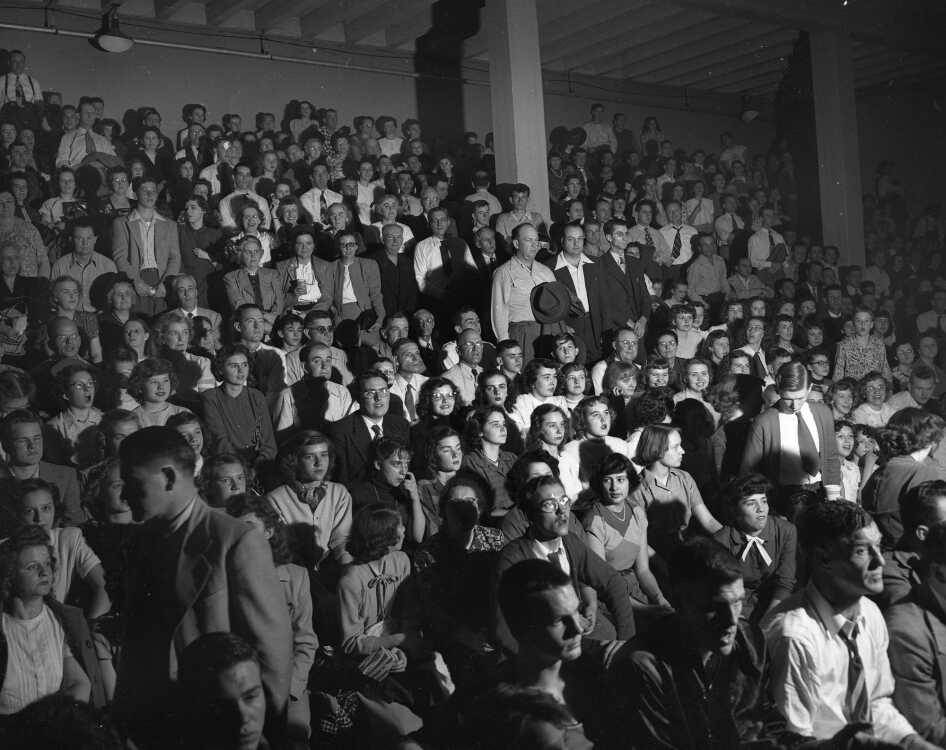 The Arena Building in Cape Girardeau saw huge crowds for basketball games nearly a decade after its 1940 opening.

Here is a wider view of a game at the Arena.

G.D. Fronabarger took this picture of a crowd at the Arena, possibly in 1949 at one of these basketball events reported by the Southeast Missourian:

The largest crowd in Cape Girardeau basketball history squeezed its way into the Arena Friday night for the semi-finals of the regional basketball tournament. Those who have followed athletics in the city for years were amazed as they watched hundreds of automobiles, occupied by additional hundreds of persons pour into Arena Park and try to find even the smallest bit of standing space in the building after all seats had been occupied.

The official paid attendance was given as 2101, tournament officials said today, but added that the figure told only a part of the story. There were more than 300 official passes out, while certain personnel connected with the games were admitted without passes. They calculated that better than 2500 persons were contained in the auditorium.

It was without doubt the largest attendance at any indoor sports event in the city's history, and left many wondering just what it would have been if all could have been seated. That thought occurred when it was observed that an indefinite number of persons -- perhaps in the hundreds -- worked their way through the park, saw the size of the throng and left, not wanting to stand through the two semi-final games.

Every seat in the building -- estimated to accommodate 1400 persons in permanent seats and 200 to 300 in temporary bleachers, was occupied. The crowd filled the stage at the north end of the building, ringed the floor where it would not block seated spectators' views, filled the two entranceways and backed up into the lobby entrance. Some spectators placed benches at the lobby entrance and stood on these.

It was by far a larger crowd than could have ever been accommodated in old Houck Field House. There seating capacity was figured at about 1200 with a maximum capacity, extra seats and standing, of about 1500 to 1600 persons.

Police officers did a remarkable job of handling traffic. The road leading to the Arena Building was kept clear down the center, with vehicles parked on each side from the extreme north curve of the race track to beyond the front of the building.

Parking of vehicles was handled by Chief of Police Wm. A. Mills and Patrolmen Shannon Kelley and Lester Brown. Chief Mills estimated that 1500 automobiles were parked about the Arena. Assisting these officers in traffic control after the games were State Troopers Percy Little and Morley G. Swingle, the former with the chief at the Kingshighway (Highway 61) entrance and the latter at the Independence-Kingshighway intersection.

Chief Mills said that the park was emptied in about 20 minutes. He based this on a 30-minute fusee lit when traffic started moving from the park. It had about 10 minutes time left when the task was finished, he said. The chief said automobiles began to move into the park at a few minutes after 6 o'clock and continued arriving until 9 o'clock. The first game started at 7 o'clock.

State College and Central High School basketball games had always been played at Houck Field House until that building was destroyed by fire in February 1948.

A temporary hardwood basketball floor was brought in to the Arena Building from the former Weingarten, Mo. prisoner of war camp. That floor was 60 feet by 90 feet which was larger than the floor at the field house. The college acquired two surplus buildings from the camp at no cost except for dismantling them and hauling them to the city.

The city allowed the college and high school to use the Arena Building without rental, but the schools paid the cost of utilities and heat when the building was in use.

With Saturday night's full house coming a day after Friday night's overflowing jam, many spectators who sat uncomfortably packed in the big Arena wondered what will be done next year about ventilation if the building is used again for basketball games--particularly the regional tournament. The "smoke-filled room"--to borrow a political convention phrase-- was stifling to a point far beyond ordinary comfort. There's no doubt two big ventilating fans are needed, one at each end of the building, and an end put to the smoking.

Exhibiting before a paid attendance of 2076 basketball fans, the Harlem Globetrotters defeated the House of David team, 51 to 43, Monday night at the Arena. Along with the cage play, the crowd was entertained during the game by Ed Hamman, the clown of sports, and at the half by Jacques Cordon, the French unicyclist, who drew applause by his juggling act.

So great was the crowd that several hundred fans were turned away and the doors were locked at 7:30 o'clock or 30 minutes before the game got under way. The paid attendance included 1869 adults and 207 children.

The game saw the bewhiskered five setting the pace through the first three quarters and up to six minutes of the final period when the Globetrotters knotted the count at 42. The House of David five went ahead a moment later on a free toss, 43 to 42, but Lance Cudjoe sank a field goal at the seven-minute mark to give the Globetrotters their first lead in the game, 44 to 43, which they maintained, and increased in the closing minutes. The last minute and a half saw the exhibition of dribbling by the Globetrotters' Marques Haynes which drew a round of applause from the spectators.