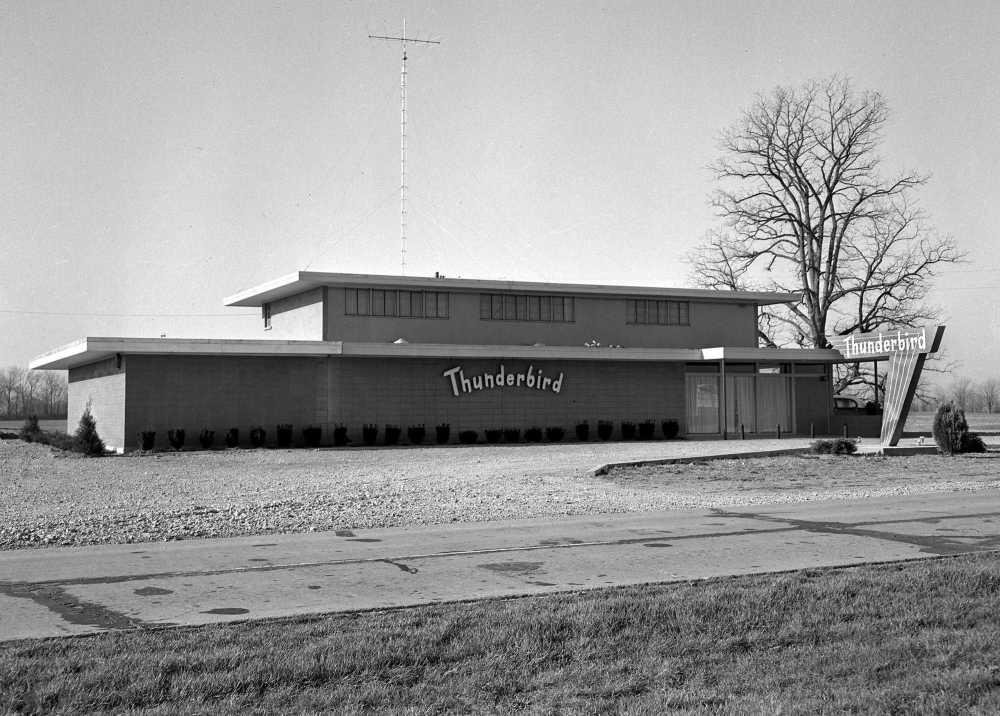 These two stories from the 1950s provide a different glimpse into the night club:

CAIRO--The Thunderbird night club in East Cape Girardeau was raided Friday night by Sheriff Leslie V. Chrestman and six deputies. The Alexander County officials seized a pool table used for a dice game, a "lay-out" cloth on which bets are made, racks of chips and $235 in currency.

John Wilson, manager of the Thunderbird, was arrested and then released on his own recognizance. He will be charged today with operating a gaming establishment, Sheriff Chrestman said. Mr. Wilson was asleep at his home in East Cape and could not be contacted this morning.

Sheriff Chrestman said about 12 persons were playing dice in the upstairs gambling room of the place. About five of the gamblers were women, he added. Names of all persons were taken by authorities in case they should be needed as witnesses in a trial.

Two deputy sheriffs, young men who have not been known as law enforcement officers, were planted in the gambling room before the raid, Sheriff Chrestman said. Both had participated in rolling dice, it was related.

The arrival of the sheriff and three other deputies was signaled by a buzzer. When the alarm sounded, the two "plants" whipped out revolvers and ordered all the patrons to stand against a wall. One of the undercover agents then unlocked the door for the sheriff's party.

Sheriff Chrestman said both men have been on the staff for some time, but had not been active in law enforcement work. They will be used in more raids of the same nature, the sheriff said.

Sheriff Chrestman, who took office Jan. 1, told The Missourian the Thunderbird raid was one of four in the county Friday night. One other place in the McClure area and two in the south end of the county were investigated, but no gambling was found, he said.

The raid was part of the sheriff's "continuous law enforcement" policy. "It's not a clean-up campaign. I don't believe in campaigns," Sheriff Chrestman said. "But there is not going to be any open gambling in Alexander County. If they operate, we'll raid them."

Night Club Near Cape is Held Up

Robbers toting sub-machine guns, shotguns and pistols terrorized patrons of the Thunderbird, southern Illinois night club across the Mississippi from Cape Girardeau, early today and escaped with a quantity of loot, including contents of the establishment's safe.

Cape Girardeau police received a call from John Wilson, operator of the plush night club, at 3:57 a.m. today. They said the robbers were in the Thunderbird for 50 minutes and estimated that the armed hold-up occurred around 3 o'clock.

The report to officers said there were from three to five thugs involved, but the exact number could not be determined. Police explained this was because all were never together and the robbers worked in different rooms of the place.

There was no report of the exact number of patrons in the Thunderbird. But police said they were told 19 cars were parked outside, so it was presumed that the number of patrons was possibly double that figure or more.

One guest reported to Mr. Wilson that $1800 was taken from him, police here said. All of the patrons in the establishment were robbed as the thugs took their time and worked the place over thoroughly.

As far as could be determined, no shots were fired in the robbery.

Telephones were ripped from the walls, making it difficult for immediate contact to be made with peace officers and giving the robbers time to flee the area.

Officers here had no report of the amount of money taken from the safe, or the method of entry. It was believed that the yeggs forced an employe to open the safe.

There was no estimate of the total sum taken in the methodical and evidently carefully planned robbery. Authorities considered that the sum taken from all patrons, plus any money removed from the safe and elsewhere in the night club, was substantial.

The fact that the robbers carried sub-machine guns, and that there were several of them, led authorities to consider that the holdup was conducted strictly on a professional basis.

Illinois State Police at DuQuoin said they received their first report of the robbery shortly after 4 a.m. today from one of their officers stationed in the area. They said state police from the southern section were making an investigation.

Sheriff Carl Klutz of Alexander County also was reported conducting an investigation into the crime.