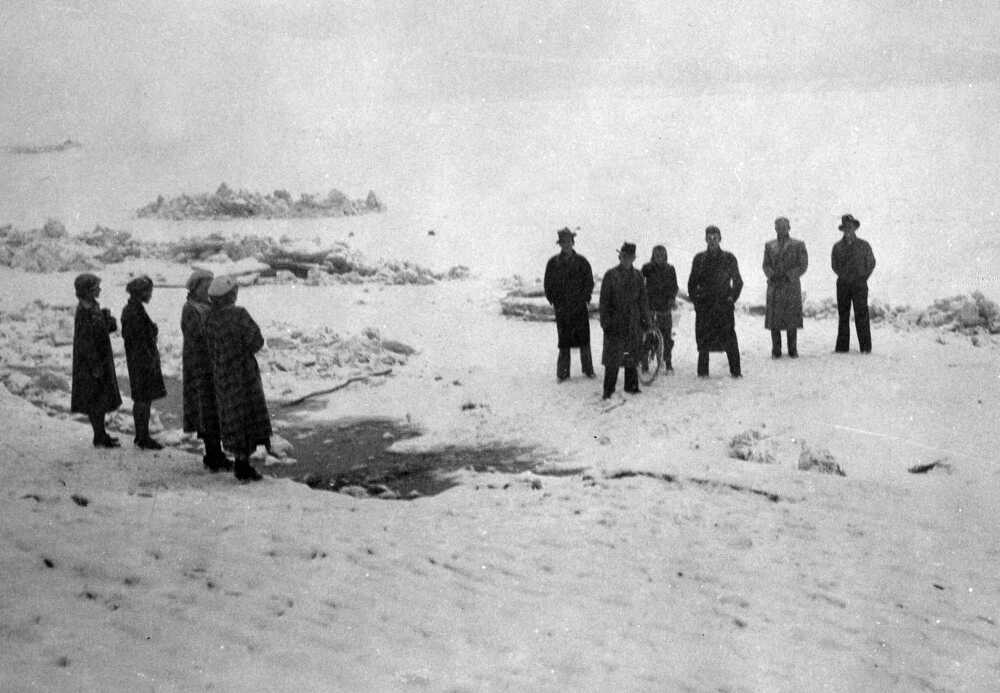 G.D. Fronabarger took this picture without incident, as it is clear he was standing on the ice-covered cobblestones at the Cape Girardeau riverfront, along with the women at left. The group of men are standing on the frozen Mississippi River. It is one of Frony's earliest photographs taken for the Southeast Missourian, but it was not published.

Reporter Makes Own Story; He Almost Gets Bath in Icy River

"How come," asked the city editor, "with all this ice in the river and so many walking across, why hasn't someone fallen in?"

"They're just lucky," replied the reporters all together as good reporters will.

"Well, it's funny someone hasn't even gotten their feet wet," mumbled the unbelieving city editor as most city editors are.

Today, a man on Main street called The Missourian office.

"Didja hear about the man falling in the river?" he asked of the city editor.

"No," chuckled the city editor as he began to think of good expressions to use on those who thought everyone was "lucky." "Who was it?" he asked.

"Why, it was one of your reporters," the downtown merchant explained. "Sure, no kidding, didn't you hear about it?"

Like all reporters who hate to figure personally in the news, it seems that one of The Missourian's staff did almost take a dip in the icy water yesterday.

The reporter, G.D. Fronabarger, went down on the river bank to see about gulls, floating ice and whatever there is to see about a river all frozen over. While discussing the river, ice and fish with a veteran riverman and trying to snap his photograph all at once, the ice gave way beneath the reporter.

His story is that he got just one foot wet, that he leaped quickly to a raft nearby frozen in the ice and thus escaped a ducking. And, the water at that point is only 20 feet deep.

But, No. 1 victim of the frozen river was the reporter.

It was in 1924 that the first automobile was driven across the Mississippi River at Cape Girardeau.

Girardeans Motor Across River on Ice

An automobile carrying three men was driven on the ice across the Mississippi river here Sunday, for the first time in history. Local rivermen say that this feat had never been accomplished before on the river south of St. Louis.

Ed Lottie, shoe factory employe, and two companies, drove Lottie's Ford "wreck" across the ice to the Illinois shore, turned around and returned without an accident.

The start was made at the foot of Themis street, where boards were laid from the bank of the river out on the ice to avoid danger of the thin ice at the shore's edge.

Hundreds of people visited the river front on Sunday, some to walk across the river on the ice, while others merely waited on the bank.

Although Sunday was the first time that an automobile was ever driven across the ice on the river, veteran residents here recall that numerous times in the past, loaded wagons have been transported back and forth from the Missouri and Illinois shores. Many recalled seeing large loads of corn hauled from Illinois to Cape Girardeau markets.

Proving the ice on the Mississippi River, in some quarters at least, is strong, a cow came across the river Sunday from Southern Illinois to Cape Girardeau. She had been purchased here last Thursday, and, making her escape near McClure Sunday, headed out for her interstate escape and made good.

The cow weighed 900 pounds, according to Jess A. Colyer of near McClure, who had bought the animal. The animal, a Holstein, had been bought by Mr. Colyer at the Blattner Bros. weekly sale last week and had been trucked to the Illinois farm, three miles from the river.

On Sunday Colyer tried to load the cow with others for shipment to market, but she got away and headed toward Cape Girardeau.

Trailing the bovine specimen from the place she escaped, Colyer found she took to the ice near the east end of the traffic bridge and came off east of May Greene School, leaving a cow path at an angle across the ice.

Near the school the owner-that-was lost the trail, when Bossie used clean streets for most of her traveling. Mr. Colyer came here today for the cow, which had been found and penned up for the owner by J.H. Whitright, 1209 South Benton street. He had advised Blattner Bros. about capturing the animal, and Mrs. Colyer was notified.

Police had noticed the cow on Sprigg street in the Smelterville suburb, but did not know at the time she had put on her own interstate trek and was being hunted.

The cow bore sale tag No. 841, the tag being pasted on her hind quarter. She is worth approximately $40 in either state, the owner said.