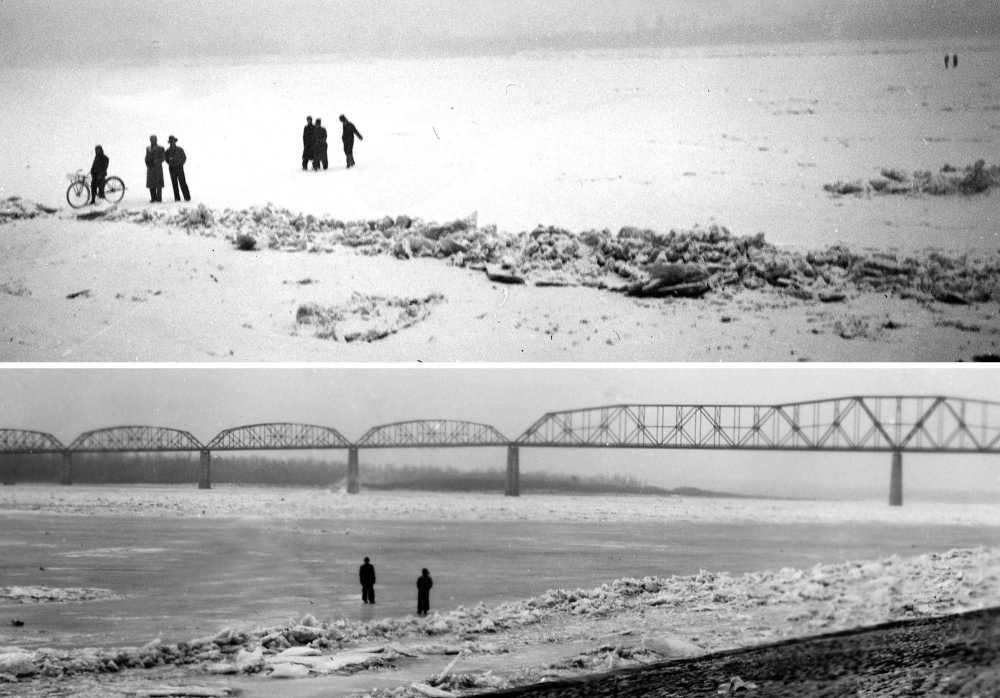 These are two of the earliest photographs taken by G.D. Fronabarger.

The top photo shows people walking on the Mississippi River, far right, near the Illinois side. It is dated January 1936.

The bottom photo is undated but might have been taken about the same time.

The photos were not published in the Southeast Missourian. This sort of behavior was not encouraged at the time.

Back then the river was flat when frozen over, unlike today with river traffic that forms ice floes. A few automobiles were reportedly driven across the solid river over the years, but we have no pictures.

Taking something of a chance, but coming out lucky enough, four Cape Girardeau school boys walked across the Mississippi River late Wednesday, but, now that their parents know about it and school authorities have been told, they likely will not try it again. At least until older persons test out the strength of covering the boys likely won't pick the river as their play and skating place.

The lads, all pupils at May Greene School, are Martin Dubbs, 12, of 335 Morgan Oak street; his brother, Louis Dubbs, 14; Hays Spradley, 10, of 500 Elm street; and O.E. Owen Jr., 11, of 235 South Spanish street. The boys said L.B. Schuette, a companion, went a short distance on the ice, then returned to Missouri, probably for reasons best known to himself.

The four were on the ice a little less than 40 minutes, starting out just after school was out. They started from a point near the Leming lumber mill and after making a loop which extended all the way to the Illinois shore, came back across at a point near the traffic bridge. There is snow on the ice, making it difficult to see clearly what the condition is.

Louis Dubbs carried a pole with which he attempted to test the strength of the ice before he and others walked on it. It was strong all along, the best he could tell. The other boys did not carry poles, sticks or ropes and had they broken through might have quickly gone beneath the ice.

The four pupils, possibly not yet realizing the chance they took in venturing the entire width of the river on the comparatively new ice, were free to discuss the trip today at school. Supt. L.J. Schultz, who learned of the exploit this morning when at May Greene School, told the lads that they should be careful in the future and that they had better let the experience of yesterday suffice for a while.

Ice on River is Not Safe; Engineers Sound Warning

A warning that the Mississippi River, frozen from bank to bank, is not safe to walk on, was issued today after scores of the adventurous and curious went out on the mile-wide stretch. There has been no report of the ice breaking with those testing its strength, U.S. Engineers said, but they added that the stream's swift and treacherous current keeps the thickness of the ice at a minimum and persons going on it are taking chances with their lives.

There are numerous "air holes" in the ice, and these until today had not been frozen over. The water in many places under the ice is 50 and 60 feet deep and a person breaking through would not have the ghost of a chance in saving himself, engineers declared.

For 100 miles the river, north and south of Cape Girardeau, is locked in a great ice pack. The lower extremity of the gorge is about 3 miles north of Cairo, Ill., and the river is frozen over all the way from there to a short distance north of Chester, Ill. At Chester it was frozen over for the first time since 1918. The north end of the lower gorge is at the traffic bridge here and north of this to near Chester the stream is blocked, another gorge being formed at Chester. Two more days of zero weather and the big stream will be frozen over all the way to St. Louis, engineers believe.

Ice cakes in the streams here in many places are standing from 3 to 10 feet above the surface of the river. All floating equipment owned by contractors engaged in construction work on the stream, and the equipment of the U.S. Engineers, is frozen solid in the ice.