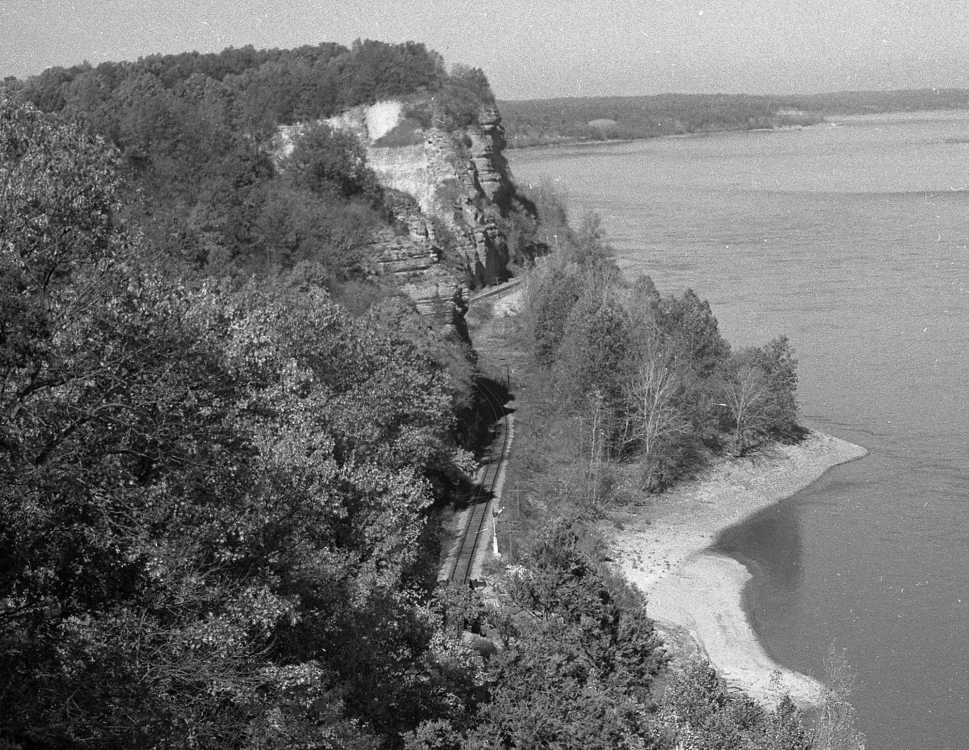 G.D. Fronabarger shot this picture while on a tour led by John L. Wescoat at the Trail of Tears State Park site. It was published April 7, 1956.

Eye-catching views such as this expanse of the Mississippi River and its high bluffs of overhanging limestone will be opened to visitors throughout the nation if Trail of Tears State Park materializes. This photograph was taken from one of the great bluffs during a tour of the area Thursday. It looks northward. The tracks of the Frisco Railroad wind beneath the overhangs, which extend for more than a mile north and south of the point from which this picture was taken. The view changes from one cliff to another, each giving an exciting vista over the Mississippi. Residents of the county will vote April 24 on issue of bonds amounting to $150,000 to purchase the 3000-acre tract. If they approve, the land will be turned over to the Missouri Park Board for development into a recreation area.

Wescoat was a former Cape Girardeau County assessor who was instrumental in securing options for the county to purchase the land for the state park.

The Southeast Missourian published this feature article in its Dec. 28, 1975 edition:

For many years John G. Putz, a resident of Jackson, was a correspondent for The Southeast Missourian and wrote in descriptive language of the beauty of the Mississippi River hills, particularly in the spring and fall when the foliage was bedecked in its greatest beauty. Without a doubt he did more to promote the idea of creating a state park along the Mississippi River than any other person. Year after year his plea was to set this area aside as a park so the flora and fauna could be preserved for future generations.

When Charles Boutin of Cape Girardeau became a member of the State Park Board, he called a meeting of several Cape County citizens to tell them that if Cape County would purchase approximately 3,500 acres of this hill land and offer to donate it to the State Park Board, he thought he could have the board accept it and develop it into a state park. The group he called together included the following men: Louis H. Schrader, A.E. Earl Stovall, George Priest, Bill Wampler and R.B. Medlock of Jackson, and Leonard Rehg, B.E. Montgomery, Ted Regenhardt, A.C. Brase, Thomas L. Meyer, W.P. Meyer, John Craig and John Wescoat of Cape Girardeau.

Due to our inexperience several time consuming mistakes were made. First, options were secured for only a six month period. Some of the options were rather difficult to secure and before they were finalized some of the first options had expired! Secondly, we had thought about paying for the land by donations from business establishments and interested citizens but not a cent was raised in this manner, so the options expired along with much of the interest in a state park that had been promulgated.

Chairman Brase, Charlie Boutin and I immediately went before the County Court and solicited their support for the park.

Plans were worked out to secure citizens to sign a petition requesting the court to call a special election to bond the county for $150,000 which represented a one mill tax on a $55 million accessed valuation for a period of three years.

While this plan of financing the project was being worked out, as chairman of the option committee, I was busy renewing the options for a period of time long enough to hold the election, sell the bonds and buy the land as most of the other members of the committee were busy with their own work, and some were skeptical about securing the necessary support from the public.

In recalling those days, I am reminded of some interesting moves that had to be made to make the park a reality. Mrs. Orvill Holcomb owned 40 acres which were in the boundaries of the proposed park. When I talked with her about an option on her land, she agreed to give it in exchange for a few acres outside the park on which her family could build a cabin. Robert Jennings owned 120 acres in the proposed park site and he agreed to give the county an option on this acreage if they would secure him a couple of acres across from the park and allow him to move his house there.

In order to secure these two tracts I secured an option from Ode Windeknecht on 56 acres which fronted on the gravel road and to the west of the proposed park. I then went before the County Court and explained the transaction. I told them the 56 acres was secured for the same amount of money that Mr. Windeknecht would sell the 12 acres needed for the park, and as the county would have no need for the remaining 44 acres, I requested that they deed 22 acres to the Otahki Girl Scout Council and 22 acres to the Southeast Missouri Council of the Boy Scouts of America.

This they agreed to do and as a result the Holcomb and Jennings tracts were secured for the park, the Girl Scouts and Boy Scouts received land near the park, Mr. Jennings received two acres and Mrs. Holcomb received 10!

Wilson Froemsdorf lived on some acreage in the proposed park area and he gave me an option on this, leaving him with about 20 acres south of the Moccasin Springs Road on which he planned to build a new home. The State Park Board notified Mr. Boutin that they would have to have the land on both sides of Moccasin Springs Road in order to control the area -- building, traffic, etc.

I went back to Mr. Froemsdorf to explain this and he said that as he had a job with the U.S. Engineers, reading the water gauge on the Mississippi which he did not want to relinquish, he would need the new home in order to conveniently handle his job.

Mrs. Mae Morrow owned 40 acres up on the hill which had a small house on it. This 40 acres abutted the south line of the proposed park. After several trips to see Mrs. Morrow I secured an option on her ground and then went back to Mr. Wilson and offered him a specific amount of money for his 20 acres, agreeing to give he and his wife a lifetime dowry in the Morrow tract which would return to the park at their death. Mr. and Mrs. Froemsdorf agreed to this, and so another part of the park was put together!

Without going to the record books I can recall many of the people I secured options from in addition to those already mentioned: such as, Robert Sides, Joe Schenimann, Robert Schenimann, Lester Gohn, Charles Windeknecht, Hirschel and Jean Windeknecht, O.J. Miller, M.D., Bertrude and Gertrude Bray, Red Ervin, Grover Golliher, Loren Buchheit, Willie and Norma Steinhoff and Marion Kamp. The options on tracts owned by Fred Course and Mr. Leimer were secured by members of my committee. This was the park in its entirety with the exception of the Russell Fristo tract which was a rock quarry. This tract became available at a later date and I arranged for its purchase under the most trying circumstances.

While the work on the options was proceeding, petitions were circulated over the county receiving 2,834 signatures of voting citizens, requesting the County Court to call a special election for Tuesday, April 24, 1956, at which time the people of Cape County had a chance to put their stamp of approval on the State Park.

Before the election I took groups of interested citizens on tours of the proposed park to promote interest and the editor of The Southeast Missourian, John L. Blue, accompanied me on one of those tours. He wrote a glowing article, "Proposed State Park Site Decked with Rugged Beauty" which had a great influence in selling the park to the voters. How well they were sold is attested to by the overwhelmingly favorable vote on the day of the election -- 5,625 for to 699 against! Thus the Trail of Tears State Park became a reality and a lasting monument to the Cherokee Indians for the heroic suffering they endured during their forced march from Georgia and South Carolina to Oklahoma. The rugged beauty of the river hills were preserved as a park to be used by generations yet to come.

House built for riverman at Trail of Tears site

From the Morgue by Sharon Sanders:

Remembering the Trail of Tears