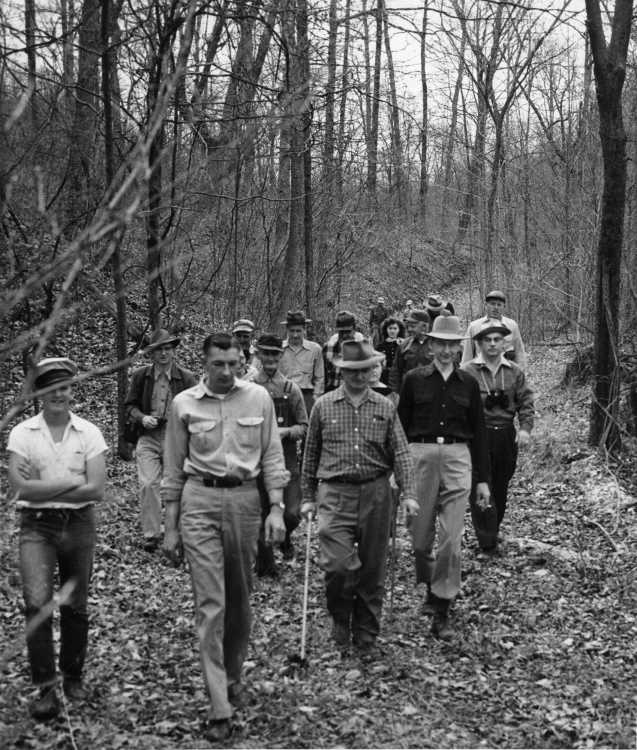 Cape Girardeau County citizens tour the proposed site for Trail of Tears State Park on April 5, 1956 in this photo by G.D. Fronabarger.

They are heading eastward along Vancill Hollow, an old wagon trail that leads through the lower part of the park area to the Mississippi River at a point where it is flanked by high limestone bluffs.

John L. Wescoat, with walking stick, a member of the committee working for the park, conducted the tour.

Trail of Tears State Park -- its name if the people of Cape County approve its purchase on April 24 -- came alive Thursday afternoon for an enthusiastic group of county citizens who walked its scenic valleys and picturesque hills and were paid for their effort at trail's end by a commanding, panoramic view of the Mississippi River from its high limestone bluffs.

The party, some from the Cape Girardeau area, others from the north around Jackson, met at Iona School, then drove north along the territory's western boundary to the entrance to Vancill's Hollow.

There they parked their cars and walked into the woods, which become more engaging the farther one travels eastward toward the river.

Among those along on the trip were two men who have spent their lives in the area and know every foot of the ground. They were Henry Perry, 68, and Bern Rodenberry, 72, of Oriole.

Mr. Perry said the old road followed by the group had been built in the 1800s by a family named Vancill who owned and operated a store at its terminus on the riverbank.

They operated a steamboat landing and ferry at the point, known as Vancill's landing. Mr. Perry recalled his father telling of the sinking of the Paw-Paw in the ice at the landing during the winter of 1865. He said when water is low, the remains of the old riverboat can still be seen.

The hikers, dressed in outdoor clothing, got to Vancill's landing, but did it in a round-about way. They left the hollow to take a trail along the ridge leading to the bluffs, limestone deposits 150 feet and more in height, and from there were awed by the magnificent view of the river and Illinois shore.

They then took a precipitous downhill trek to a Frisco Railroad trestle just north of Sublett Hollow Light which is 15.3 miles north of Cape Girardeau.

From here they gained an impressive view of the great bluffs, towering far above them and crowned with cedar trees. A short walk was taken north along the tracks to gain a better look, and then the group walked southward to the old landing, before turning westward for the walk back to their vehicles.

All were impressed by the possibilities of the area. Mr. and Mrs. Leonard Peerman of Jackson observed that not only are there no other state parks on the Mississippi River, but also there is only one, Arrow Rock State Park, on the Missouri River. They agreed that with development the section can be one of the most magnificent recreation areas in the midwest.

It was recalled that many years ago John G. Putz of Jackson had urged the development of the area into a park. He frequently wrote in descriptive language of its beauty, particularly in the spring and fall.

This was brought out to the party of hikers, who saw the woods dotted with the white blossoms of wild plum and the delicate purplish tint of hundreds of redbud trees. These were offset by the beginning green of buds on trees, just starting to burst into leaves and blossoms. The dogwood was not yet in flower, but in another week or so it will be at its peak beauty.

Members of the State Park Committee, the local group that has steered the program to date, said they expect to have other tours through the area. These will likely be on the weekend so more people can go along and enjoy the beauty of the area.