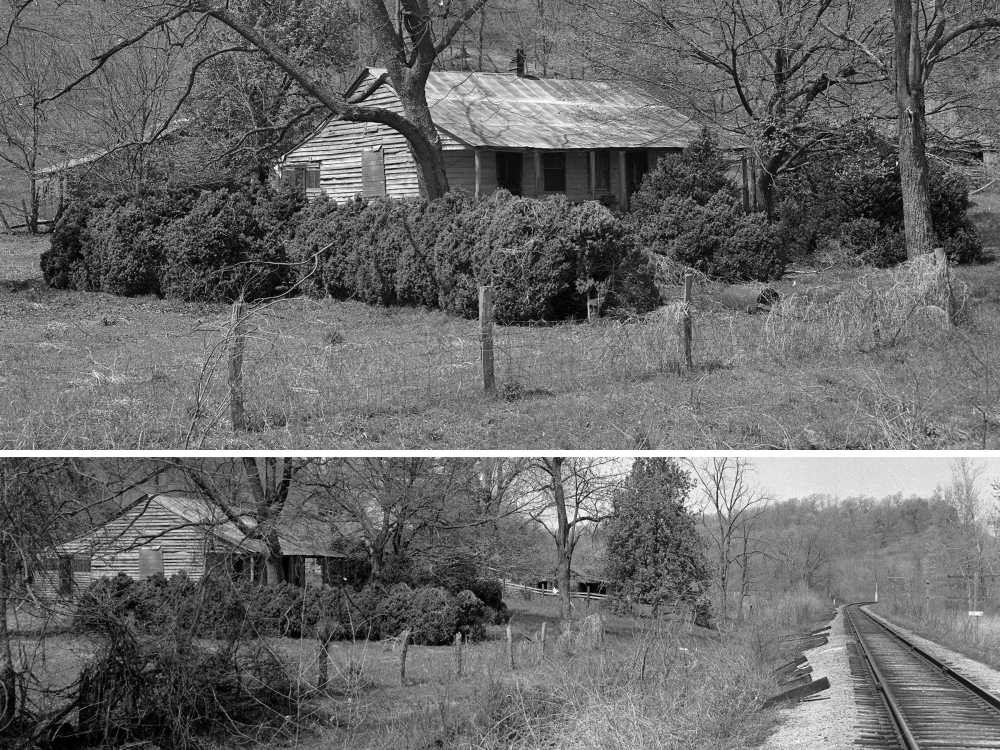 G.D. Fronabarger joined a group that toured the proposed site for Trail of Tears State Park in 1956. He shot these pictures of a homestead in the area that was owned by Grover Golliher.

The top photo was published April 25, 1956 with a story of the state park bond issue that was approved by voters.

The photo caption turned out to be too optimistic about the old house:

"This photograph gives a close-up of the house which was built in 1850. Its restoration in a program of development by the state should be an easy matter. The boxwoods shown about the house are some of the finest in the country, and one of them is 17 feet in diameter."

The Bartholomew planning firm of St. Louis made aerial and other surveys of the wooded 3000-acre tract and after study suggested a program of development.

"All of the farm buildings in the park, some seven in all plus a few outbuildings, will be razed during the clearing program. Much of the park will be left in its original wild state to preserve its natural beauty."

Cape County voters, in an unprecedented show of unanimity, and by an overwhelming margin, gave approval Tuesday to acquisition of 3000 acres of beautiful Mississippi River hill land as the site for scenic Trail of Tears State Park by endorsing a $150,000 bond issue with which to purchase the tract.

The margin carried in every section of the county -- Cape Girardeau, Jackson and Byrd Township and the rural areas -- by tremendous majorities.

Countywide, the vote was 5625 for the bond issue and 699 opposed, a margin of nine to one in favor of the proposal.

Cape Girardeau gave the bonds an 18 to one advantage with a massive 3460 votes for and only 191 opposed.

Byrd Township, which includes both Jackson and adjacent rural areas, rolled up a huge margin, 948 to 88, for an 11 to 1 triumph.

Rural Cape County outside of Cape Girardeau and Byrd Township also went wholeheartedly for the bonds. The margin in the rural precincts was 1217 for to 420 opposed, almost three to one in favor.