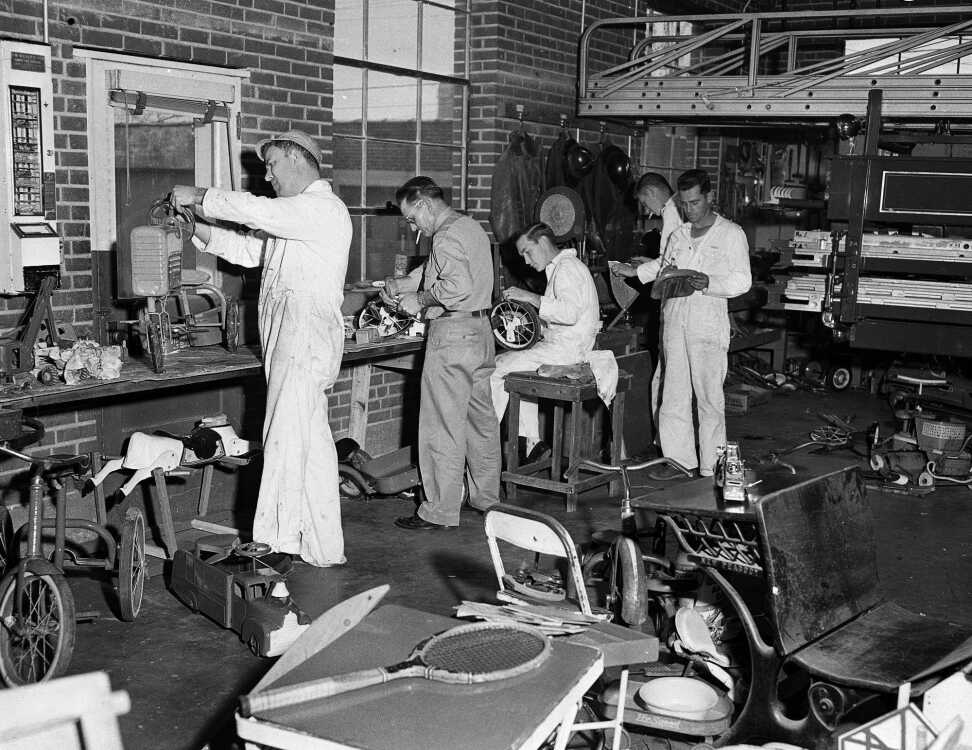 Firefighters at Station No. 1 are shown repairing some of the hundreds of toys brought to them to make ready for distribution on Christmas to youngsters in the city who might otherwise be by-passed by Santa Claus. From the left are Romanus Halter, H.A. Eaker, assistant chief; Paul Kesterson, Capt. J.W. McLain and Jack Sample.

This story in the Dec. 5, 1956 edition of the Southeast Missourian tells about the fire department's annual toy project:

Firemen this year, reviving a once traditional Christmas time undertaking for them, are busy repairing and repainting used toys for distribution to youngsters of the city who otherwise would wake to an empty stocking Dec. 25.

The toys may not be new, but they'll be sound and they'll be bright and shiny and perhaps they'll be more important to the kids who receive them than most adults think, for the world of kids is a small one that small things can often undo.

The response of persons to efforts of the Cape Girardeau Firefighters Association to secure toys for those children unlikely to receive any has been very encouraging, Fire Chief Carl Lewis said.

Every kind of a toy--tricycles and bicycles, balls and dolls, airplanes and cars, bows and arrows and guns, novelties and games--have been brought to the three fire stations along with cash donations as well as paint and offers to buy paint and other materials for repair work, Chief Lewis said.

The schools of the city are compiling a list of youngsters who may need to be helped by the firemen. Chief Lewis said they face a problem here, however, in determining whether the parents will approve of their youngsters receiving toys from the firemen. It'll be a job, but he said he supposed the firemen will have to contact all parents before delivering any toys.

Firemen will distribute them Christmas Eve in a reserve fire engine which is to be converted into a facsimile of a large sled.