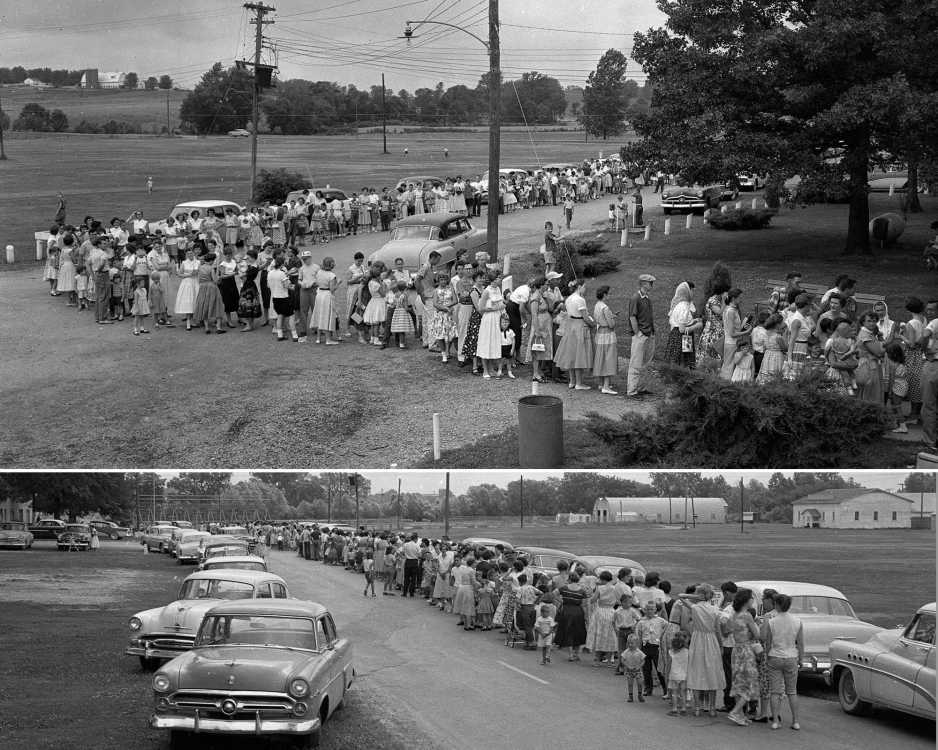 Hundreds of persons, adults and children, stood three abreast in this line at the Arena Building this forenoon to have smallpox vaccinations at the clinic conducted by the Cape County Medical Society. The line continued at this length throughout the morning hours. The supply of vaccine began to run short and special orders had to be made to care for the throng. The line extended from inside the Arena Building out the south door and west to the East Rodney Drive entrance to the park. (Photo by G.D. Fronabarger)

The supply of vaccine sent here by the state--sufficient for 2000 vaccinations--was not enough to handle demand. The free program was declared necessary after a 15-months-old child became ill a week ago with what was believed to be chickenpox. Later it was diagnosed as a definite case of smallpox. The vaccination program was decided on as a precaution to prevent any possible mass spread of smallpox.

Almost every adult who was vaccinated was accompanied by one or more children. Many were babes in arms.

Some of the children accepted the needle stoically. Others put on a brave front, but when the needle made the first contact, they grimaced or broke into tears.

Then there was another group who made no pretense about bravery. They cried as soon as the doctor took their arm.

Many were sympathetic criers. They saw someone else crying and decided they should lend help, so they broke into tears, too. There were some who had to be led forcefully to the doctor by their parents or a nurse.

But by and large, most of the children accepted the vaccination as a matter of course and passed through the line without difficulty.