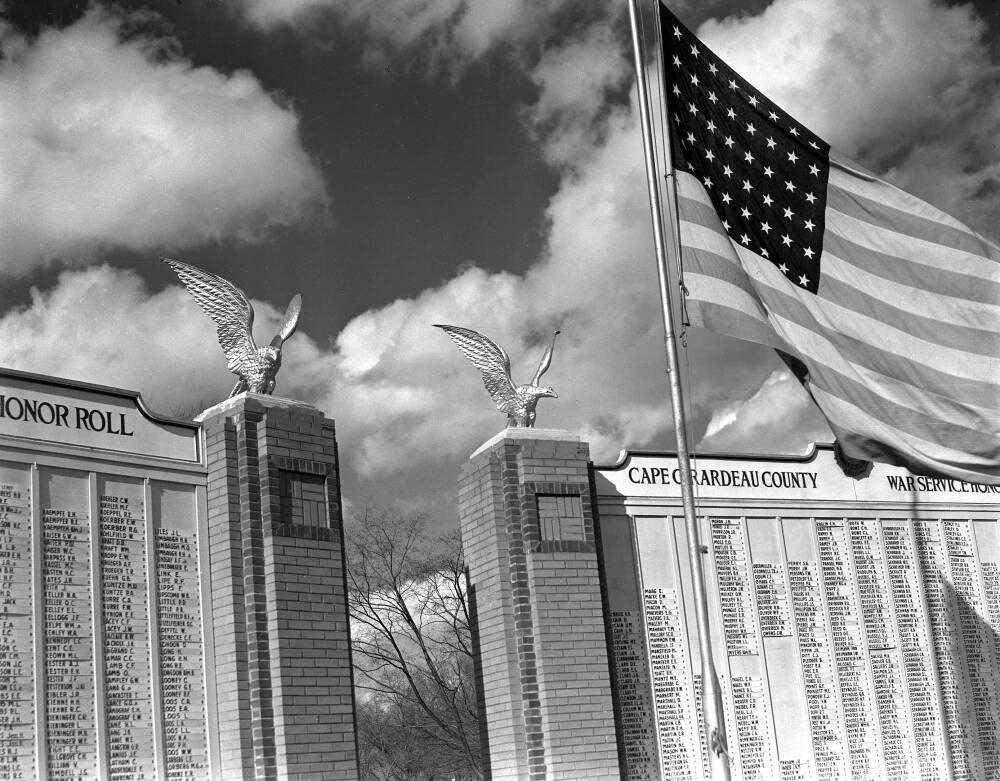 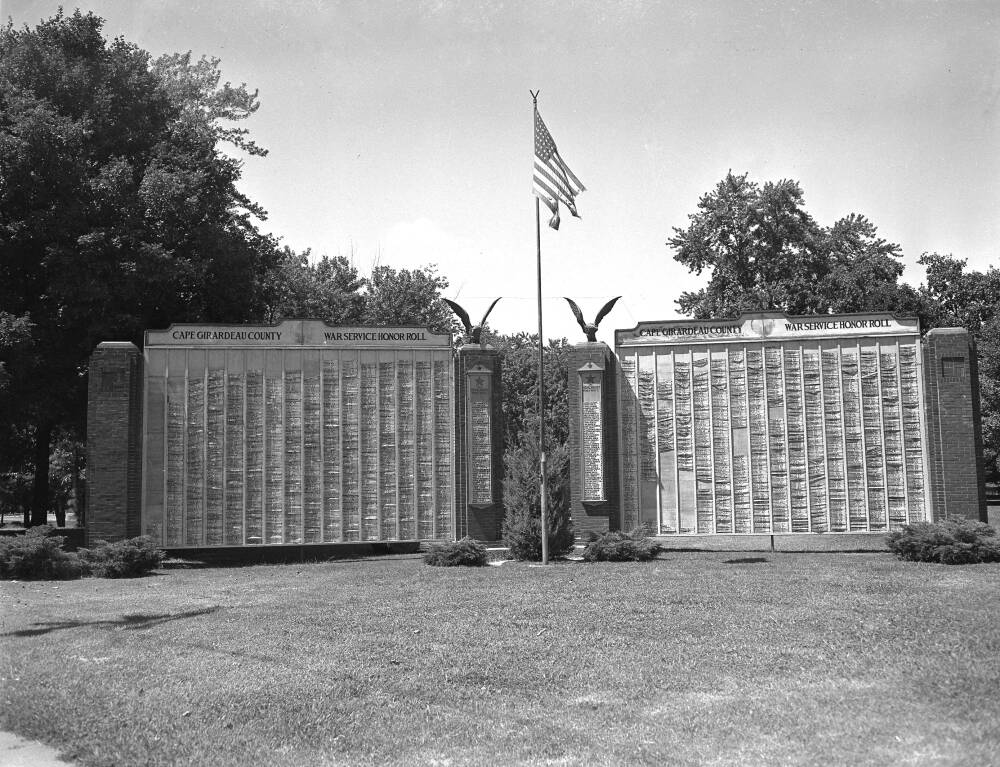 Freedom Corner at Fairground Park, later renamed Capaha Park, was the site of Cape Girardeau County's War Service Board during World War II. The board was erected by Louis K. Juden Post of American Legion and dedicated July 4, 1942 at the annual Legion picnic. It contained the names of 1295 military service members.

G.D. Fronabarger took pictures of the board for the Feb. 4, 1943 edition of the Southeast Missourian. It appears that One-Shot Frony took two pictures at the time, as a similar photo was chosen for the front page.

The above photograph was made Wednesday afternoon just after two big gold eagles had been installed on the center pillars of the Cape County war honor service board. The big birds, symbolizing the spirit of America, are a gift of the Eagle Packet Co. of St. Louis to the Louis K. Juden post of the American Legion. Until recently they adorned the ballroom of the Steamer Bald Eagle. Each of the big birds has nearly five feet of wingspread.

Two large metal American eagles, which for many years adorned the ornate salon of the Steamer Bald Eagle of the Eagle Packet Co. Line, were received Wednesday by the Louis K. Juden Post of American Legion and were mounted on the center pillars supporting the Cape County war honor service board at Fairground Park. A letter from Henry W. Leyhe, secretary-treasurer of the packet line, which has its headquarters in St. Louis, was received with the eagles.

Ivan L. Fisher, a member of the post, has been making an effort for some time to get eagles to place on the service board, and contacted George Bolz, formerly of Cape Girardeau and now of St. Louis. Mr. Bolz secured the eagles for the post.

The birds were given a new gilt coating and shipped here, express paid, to the post. One of them is made of copper and the other of zinc. They have a wingspread of 56 inches and stand 44 inches high. Victor Haas and other workmen mounted the big birds atop the two center pillars.

In the letter to the Legion, Mr. Leyhe said: "These are two beautiful birds and hope they arrive in good condition. We know the citizens of Cape Girardeau will appreciate them and am confident they will answer your purpose."

Mr. Leyhe and his brother, Wm. H. "Buck" Leyhe, who is president of the packet firm, have long been friends of Cape Girardeau and have an intimate acquaintance with many citizens here.

Editor's Note: The bottom photo was apparently made some years later, as the board shows signs of weathering.

Special thanks to Ken Steinhoff for finding the archived story of the eagles.

Col. V.A. Vrooman of Fort Leonard Wood, who made the dedicatory address, also stressed the significance of winning the war.

"If we don't win this war there won't be any Fourth of July, such as you enjoy here today. We must win this war, but it will take collective responsibility and collective action," Col. Vrooman said.

He further stressed that this responsibility must be translated to the individual.

"We, each of us, have got to get the real feeling of patriotism in action; we must light the home fires and keep them burning," the officer declared.

"If Germany gains her objective in America we will have a condition such as will make our last depression a paradise by comparison," he further stated in emphasizing that the obligation to win the war is every American's, because every American's freedom is at stake.

Our librarian, Sharon Sanders, found a note from 1997, during a restoration, that indicates the four pillars were built in the summer of 1942. Two of the eagles were placed in 1943 and two in 1990.

Freedom Corner was rededicated as part of Veterans Day ceremonies. Events to honor veterans were held at Cape Girardeau Central High School and in Jackson.

---- Freedom Corner stands as a symbol that freedom is not free, said Burt Lehman, commander of American Legion Post 63.

---- The brick columns honor 203 soldiers from Cape Girardeau County who died in service to their country.

---- After more than 50 years, the brick pillars were crumbling and beyond repair. To leave the monument to decay would dishonor the memory of the veterans it is meant to honor, Lehman said.

---- So members of the American Legion launched a project to restore Freedom Corner. "It quickly became a community project," Lehman said.

---- He credited Charles Woodford and Herb Nance for the work they did to bring the project to completion.

---- The new columns will "proudly stand for years to come for what it means to be free," Lehman said.

---- Two of four eagles are back in place on top of the pillars. The other two will be returned soon....

"The four eagles, which have sat atop the two center pillars since Feb. 3, 1943, and the two side pillars since 1990, were removed in mid-April.

---- Although Nance is unsure what will be done with the original birds, he said the legion is considering getting four new eagles.

---- "One of the eagles has been damaged and we don't think it's worth repairing for our use," he said.