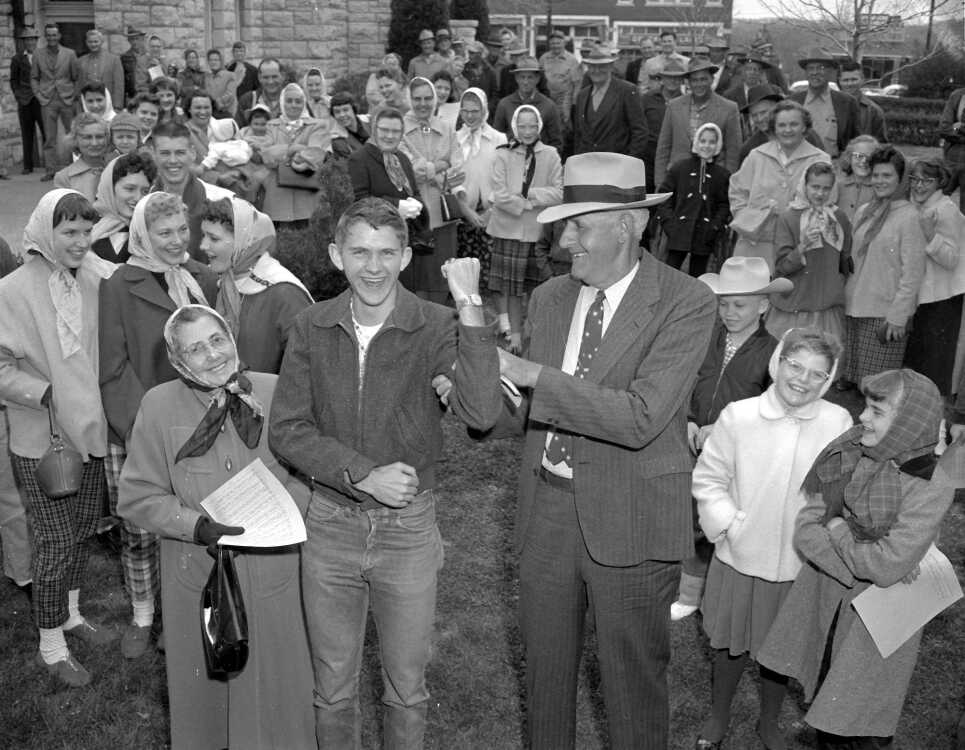 "The event was a 4-H Club county-wide event where we auctioned off ourselves to work for the person who 'bought' us. I was purchased by my grandpa, George Kasten, who is feeling my muscle. My grandma, Mary Barks Hahs, is beside me and sister, Nancy Hahs Adelsberger is looking on."

The picture was taken at the county courthouse in Jackson.

A group photo of the 4-H Club members was published April 7, 1959. It is posted in a Pictures of the Past gallery, #32. Here is the caption

“Slave” auction. Members of the Cape County 4-H Junior Leader Club let themselves be auctioned off Saturday afternoon at Jackson to individuals who bid for use of the “slaves” for one day of work. The amount bid by the purchaser was the amount paid into the club for one day of work given by the auctioned junior leaders, who are from 14 to 20 years old. All kinds of work on the farm, in the garden and around dwellings or business establishments, have been delegated and the fund will go to the club. Shown are the auctioned “slaves,” from the left, back row: Ronnie Hahs, Buckeye; Kenny Jenkins, Campster; Doris Lang, Buckeye; Judy Seabaugh, Daisy; Billy Schabbing, Campster, and Mary Beth Lang, Buckeye; second row: Pat Randol, Butch Schneider and Joe Don Randol, Oak Grove; Pat Peetz, Tilsit; Teddy Seabaugh, Daisy, and Noretta Phillips, Oak Grove; third row: Linda Jenkins, Campster; Vida Loberg, Pocahontas; Barbara Phillips, Oak Grove; Arthur Bodenstein, Gordonville; Elsie Nitsch, Oak Grove, and Tina Loberg, Pocahontas; front row: Steve Ervin, Daisy; Marcella Lichtenegger, Pocahontas; Marion Wessel, Gordonville; Jack Bollinger, Daisy; Janet Keller and Leon Wessel, Gordonville; Martha Seabaugh, Daisy, and Jim Lohmeier, Trail of Tears. (G.D. Fronabarger/Southeast Missourian archive)