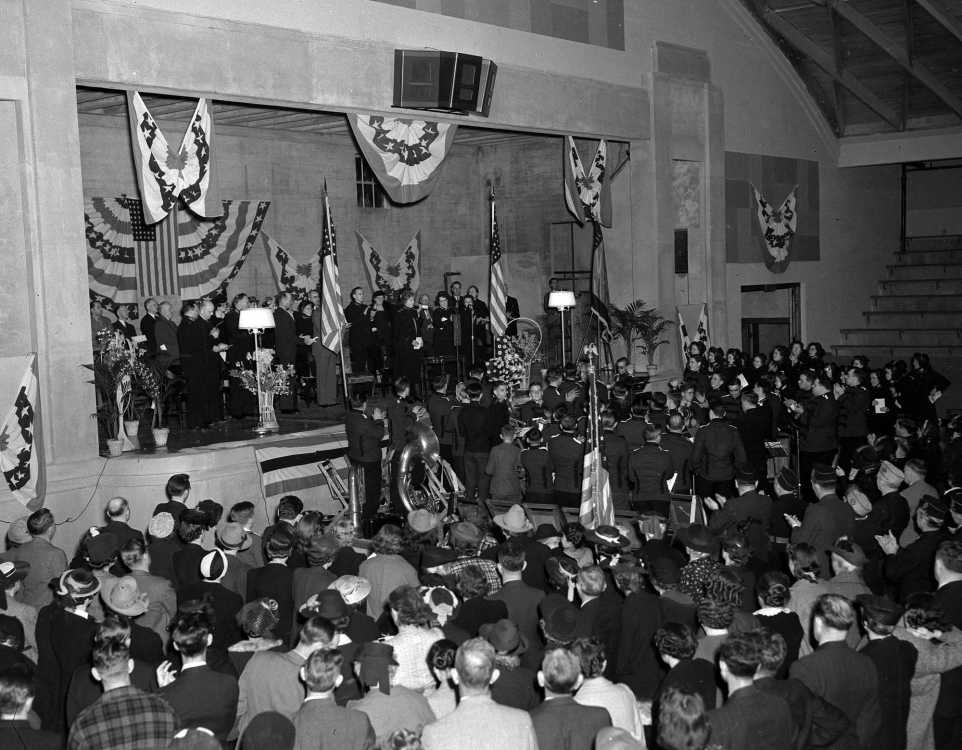 A great occasion and a great leader! The above scene shows a portion of the crowd which stood amidst massed colors and gay bunting Tuesday night at the new Community Arena when Cape Girardeau officially welcomed Gen. Evangeline Booth, recently retired commander-in-chief of the Salvation Army. Gen. Booth, when this photo was made, had stepped to the center foreground of the big stage to address the public, which rose to give her an enthusiastic ovation. (Photo by G.D. Fronabarger)

Here is a close up view of the stage.

Cape Girardeau's great new community Arena proved Tuesday night beyond a question that it will adequately serve the public for which it is intended. The first public meeting, where the public was admitted free of charge to enjoy its magnificent community center, was fitting in that it was Cape Girardeau's good fortune to initiate public use of the structure by having world-famous Gen. Evangeline Booth as the guest.

Despite a heavy rain during most of the program, a crowd of 1500 attended, and this was only a handful in comparison to the big auditorium's capacity. Not nearly all of the main floor was filled, about 1300 persons, including members of the Salvation Army band and chorus from St. Louis, were on this floor and about 300 persons were on the west side of the Arena.

Gen. Booth, retired commander-in-chief of the world forces of the Salvation Army, embracing 79 nations, literally "stole the show." It was as if the great woman caught a new spirit and vision when she stepped before the crowd and gazed over the huge auditorium. For 1 hour and 10 minutes she held the throng spellbound with her address and then climaxed her appearance by leading in the singing of sacred songs.

Enthusiasm as in Youth

It was, high officials of the Salvation Army here for the meeting said, the Evangeline Booth of old--in action. The spacious auditorium made the occasion seem all the more significant, and the crowd, catching the enthusiasm of the great leader, united in song. The music welled up and its rolling volume filled the huge hall.

The new Arena, now about 90 per cent completed, was attractive. Scores of comments from Girardeans and visitors displayed unreserved pride in the great new convention hall. Attractively decorated--not too overdone, but with bunting arranged artistically, the auditorium provided a first-hand impression of what it really is.

Gen. Booth, entering by a stage door, mounted the great stage while the 100 local and Salvation Army officials and the big crowd stood. The first thing to catch her eye was the huge words "Welcome General Booth." Up and down the sides of the Arena gay bunting was festooned and on the stage the famous woman stood before a background of the Stars and Stripes, flags also arranged at her either side, these in turn flanked by the standards of her great organization.

A cross of marigolds was set at the center and in the stage's foreground and from behind this Gen. Booth delivered her address. Seated on the floor right in front of the stage were the divisional Salvation Army band and women's chorus from St. Louis, these furnishing an hour of fine music before the General have her talk.

The new amplifying equipment recently purchased by the city was in use for the first time. Every word General Booth uttered was distinctly heard all over the great auditorium. City Commissioner Raymond E. Beckman said today he was more than pleased with it. It cost $349.75. He said that one of the Army officials from Chicago declared it was the best address system over which Gen. Booth has spoken in some time.

When Gen. Booth completed her address she called for music and led the crowd in singing the sacred songs which so long have been a part of her meetings. She highly complimented Dr. Jean H. Ruff who sang "God Save America," as a solo, then had him sing it over and over while she joined with him and led the throng in singing it.

Despite the heavy rain there was a minimum of confusion in traffic, city police and officers of the State Highway Patrol handling it efficiently. Hundreds of cars were parked in the wide areas in front of the Arena and there was space for many hundreds more, demonstrating that transportation for thousands can be efficiently handled on the new fairgrounds.