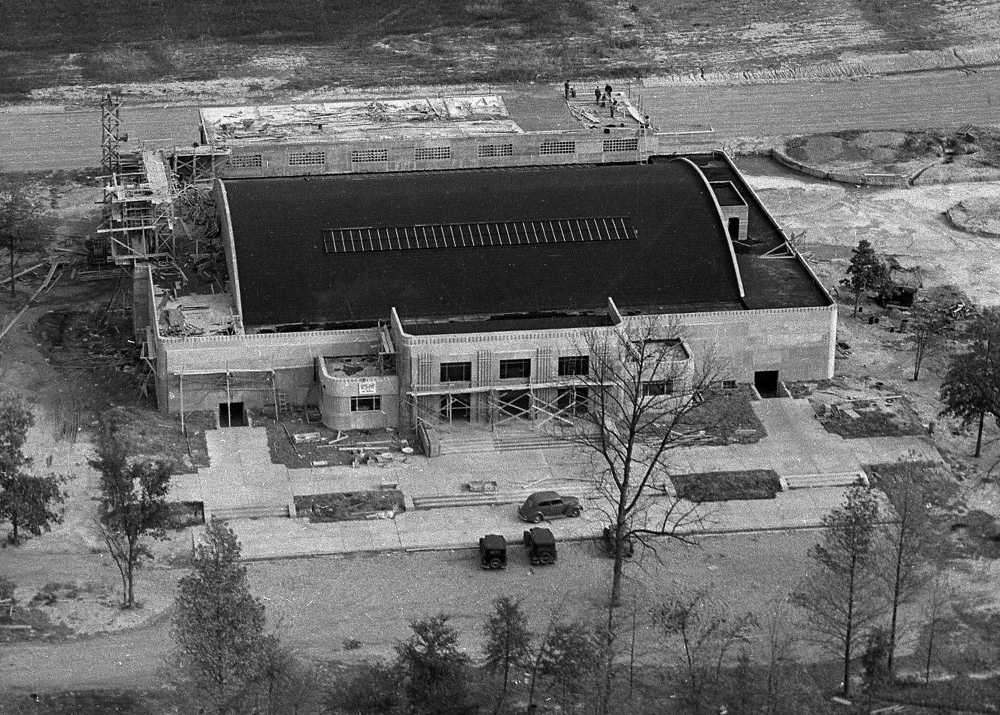 G.D. Fronabarger shot this aerial photograph of the Arena Building under construction in Cape Girardeau during the late 1930s. Workers can be seen on the right side of the grandstand roof.

Cape Girardeau voters approved a bond issue to finance the construction of the public center and surrounding park in January 1937. Within a month, nearly 15 acres were purchased at a cost of $3,350. In April of that year, another 47 1/2 acres per purchased from residents and businesses in the same area adjacent to Highway 61 and west of the city.

Works Progress Administration workers began construction on April 19, 1937. Funding for the bonds was shored by a 5-cent tax increase approved by voters on July 5, 1938.

The first event held in the building was the second Golden Gloves boxing tournament Jan. 22, 1940. It was sponsored by the Cape Girardeau Junior Chamber of Commerce.

Four months later, the building and park were formally dedicated on May 14, 1940. On that date, the building was also used for a free, public meeting. Gen. Evangeline Booth of the Salvation Army addressed a crowd of 1,500.

Cape Girardeau's two parks, one with ambiguous name and other with no official title, are on their way to official christening following action by City Plan Commission yesterday, which picked from citizen-suggested designations two choices for recommendation to City Council; selections were Capaha Park for presently-named Fairground Park on Broadway, and Arena Park for unnamed new city park on Highway 61.

In 1938, dance marathons, cot nights and walkathons were in, sometimes lasting up to a month, or two.

---- Henry Ford took a $35 million crack at the Depression, announcing he will manufacture his own tires.

---- The first blackout test was conducted.

---- Sears & Roebuck sent out new "wish-books" with brand new cover designs, and President Franklin D. Roosevelt hoped to pull the nation out of the depression years with programs like the Works Progress Administration.

---- The construction project was part of the WPA program that kept many workers busy with roadwork, landscaping projects and construction of various buildings in the state.

---- Headlines in the 1938 Southeast Missourian Achievement Edition read, "New Park for Cape Girardeau to be completed in '39."

---- The date of the special edition was Dec. 31, 1938, and the city park project, which included construction of a multipurpose building inside the 50-acre park, was 75 percent complete and expected to be ready for opening the following year.

---- The project was described as the largest WPA project of its type in Missouri, and the largest ever attempted in Southeast Missouri.

---- The Arena Building was built of concrete and was said to be the largest architectural concrete building in the nation's Middle West.

---- How large was the project? The list of supplies included 100,000 feet of lumber, used for forms; 18,000 sacks of concrete; more than 3,000 cubic yards of concrete; about 10,000 tons of rock and sand; 92 tons of reinforcing steel; and thousands of feet of pipe and electric conduit. And the building was only three-quarters completed at that point.

---- The roof over the main arena had a clear span of 107 feet. Two heating plants were to be used in the building, a hot-air furnace, possibly the largest in use in Southeast Missouri, with two giant fans to provide heat and circulation.

---- Hal Lynch and J. Carl Jourdan were architects for the project.

---- Prewitt Roberts, WPA area engineer, represented the WPA on the project; City Commissioner Paul Brooks represented the city; and Melvin Rickard was in charge of construction.,

---- The building was of grandiose scale for that period, with an auditorium that seated more than 3,000 people, a stage, dressing rooms, dining room and kitchen, conference rooms, and everything necessary for a community all-purpose building.

---- A circular track, to be used for horse racing and auto racing, was in the plans.

---- A $55,000 bond issue paid for the more than 50 acres of land and provided the sponsor's share for the WPA project. More than $300,000 was invested in the buildings, landscaping, planning, fencing, lighting and roads to the building.

---- The building, however, did not open in 1939. The first general meeting in the Arena Building was the appearance of Gen. Evangeline Booth of the Salvation Army, in 1940.

---- When the building opened, architect Hal Lynch designed an entrance to the park and building, featuring a towering structure along with an arch and special "City Park" sign, for the Highway 61 entrance. This proposal, however, didn't get past the planning stage.

---- But the park remains in use. It is also the current site of the SEMO District Fair.