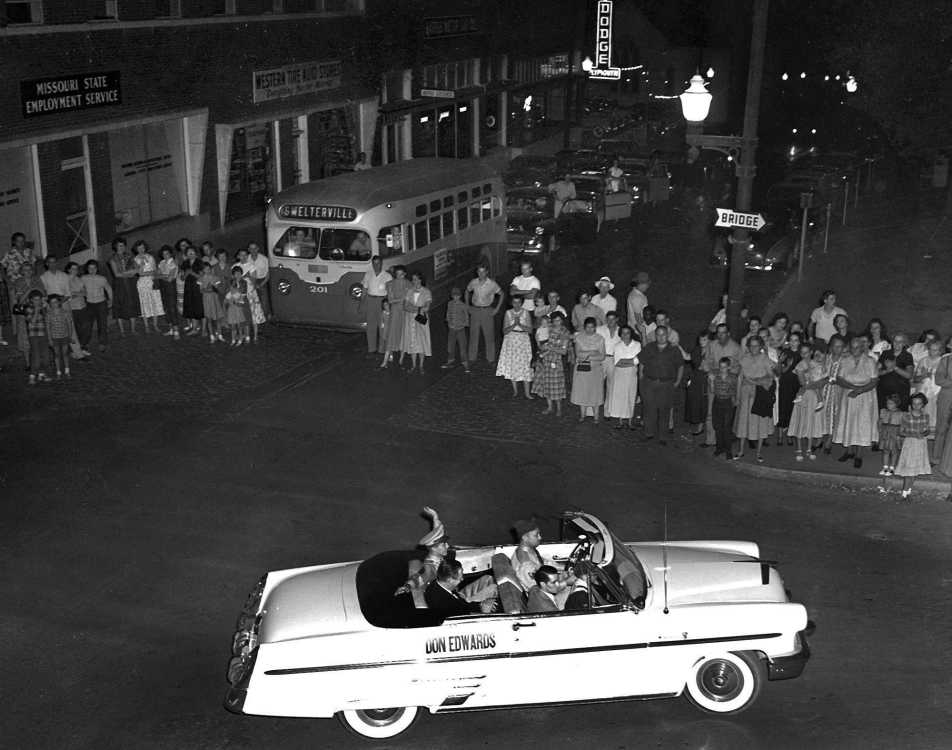 Traffic is stopped on Broadway at Lorimier Street as Sgt. Don Edwards is welcomed home to Cape Girardeau on Sept. 29, 1953, after spending 27 months in a North Korean Communist prison camp. The motorcade formed at the Broadway-Kingshighway intersection and proceeded to Courthouse Park. (Photo by G.D. Fronabarger)

Sgt. Don Edwards, looking healthy and fit despite his 27 months as a prisoner of the Communists in North Korea, received the key to the city from Mayor Manning P. Greer Tuesday night as nearly 3000 persons turned out to welcome the young soldier home.

Sgt. Edwards told a crowd at Courthouse Park it was good to be home among friends and neighbors again and he thanked them all for attending the welcoming ceremonies.

Circuit Judge D. W. Gilmore, who delivered the principal address, said if the United States had not acted promptly to take the lead in stopping the Communists in Korea, Russia and her allies would still be expanding their regime to other parts of the globe. He expressed the community's gratitude to Sgt. Edwards for his part in stopping aggression.

The Golden Troopers Drum and Bugle Corps and bands of Central and St. Mary's High Schools participated in a parade down Broadway just before the speaking ceremonies.