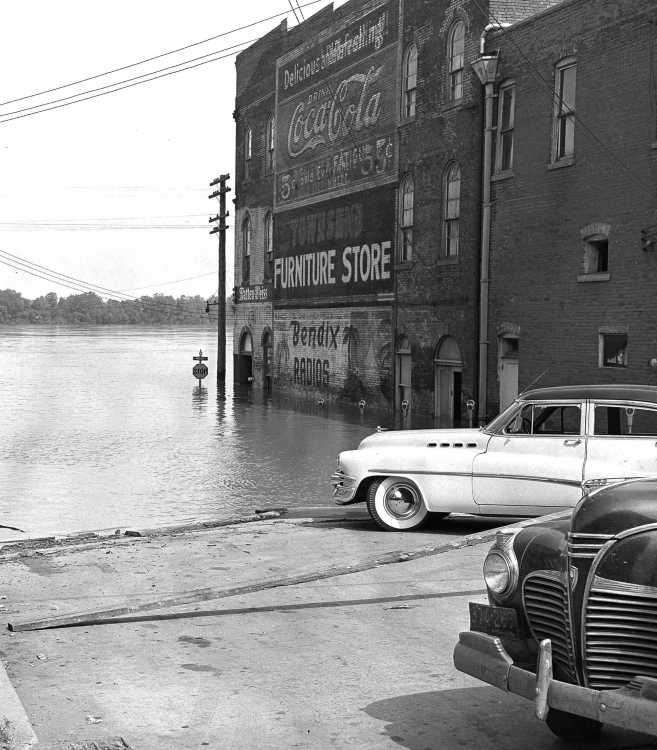 The Mississippi River covered Water Street in front of Batten-Weiss Furniture Co. in Cape Girardeau. The photograph by G.D. Fronabarger was published July 26, 1951 in the Southeast Missourian.

This was before the floodwall was constructed and dedicated in 1964.

Our librarian, Sharon Sanders, found these major floods that occurred in that time period, along with crests:

The building has several signs painted on it.

A story in the July 21, 1970 edition of the Southeast Missourian describes the changing business scene.

Days of long ago told in Water street building signs

A story of changing business and and economics is told in the lettering on this old Cape Girardeau landmark on the Mississippi waterfront at Themis and Water.

The many signs, gradually fading with age, but giving way only grudgingly, tell of business success and failure and transfers of ownership.

There once was a clothing store there, as a sign at the corner notes. and, at the front, where some of the stucco has given way is another chapter in the building's history, hidden away. The letters ETA can be seen.

Long gone days when Coca-Cola sold for a nickel send back nostalgic memories in this day of 15-cent sodas. The sign tells a tale of economics.

There are other signs on the building, which once suffered ravages of many floods on its first floor, but time has erased their message.

The building is now used for storage.

The August 17, 1950 Southeast Missourian reported Payton O. Patrick purchased the interest of Louis A. Weiss in the Batten-Weiss Furniture Co.

Henry Batten retained his interest in the store that became Patrick Furniture Co. The store was modernized with the basement section on Water Street and the front of the store at 42 North Main Street.

Today the building at 19 N. Water St. is the Port Cape Girardeau restaurant. David B. Knight and Associates opened the restaurant in December 1974. It was purchased in 1988 by Dennis "Doc" Cain.

The property dates to the Spanish land grant to Louis Lorimier, Oct. 26, 1795. It was once owned by Bartholomew Cousins, who laid out the city's first streets. Later it was owned by the Giboney family and the Houck family.

The building was originally constructed as a 3 1/2- or four-level building, and in the early years, was used as a chandlery, a business that supplied goods for riverboats and riverboat workers.

During its colorful lifetime, the Port Cape building has housed a number of businesses, including a hotel, brothel, furniture store, warehouse for bootleg whiskey during prohibition and restaurant.